Why I’m Not A Liberal

…and yeah, that’s from the point of me speaking as a rabid Marxist.

And speaking as a Marxist, this has always been a peeve of mine. With the way politics often gets portrayed, plenty of folks (both liberal and conservative alike) get the misconception that Socialism is just a ‘roided up version of Liberalism and Communism is just a ‘roided of up version of that, with the state getting more and more powerful, larger in size, and more invasive in scope as you progress along that line.

That’s absolutely not how it works, and while that picture’s wrong, I’m not really here today to correct that.

(Though just for the record, this’d be a more accurate picture of the political spectrum…)

I’ve been playing around with this post for a while now, and it’s coming from more than just a desire to clear up my own stance. I truly do think that of the two major forces in American politics and culture, Liberalism is actually the more insidious (I’m not saying that Conservatism is better, but it does seem a lot easier to confront). I’m writing not to just talk about why I’m not a liberal, but why I don’t think you should be one either.

That said, let’s bring up the obvious:

I. The Nationalist Problem

A criticism that’s easy to lob at liberals is the issue of global justice. The problem with arguing for individual liberties of citizens in this country is that the same “liberties” often conflict with the liberties of those not in this country. It is argued, for example, that men and women who live here should enjoy free enterprise. Plenty of liberals- classical or “capital ‘L'” liberals in particular- would cite this as a basic right. But what happens when those same enterprises start running sweatshops in Colombia, or using slave labor in West Africa? How do we rectify the protection of the rights of our own citizens when other countries won’t provide the same protections to theirs? 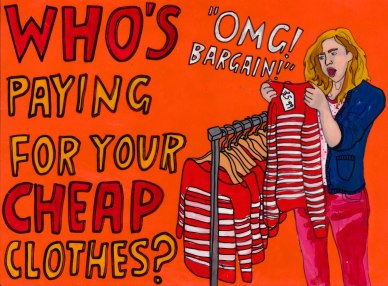 In other words, freedom is merely privilege extended unless enjoyed by one and all…

Don’t get me wrong- many (if not most) modern liberals would argue that no, they are absolutely for regulating and penalizing companies which engage in such practices. But the question then becomes one of how far to pursue that, as many companies have circumvented such rules by “contracting” with foreign-owned companies, essentially just shifting the blame out the reach of the law. It would seem like the only two logical options would be either universal policing by this country ( though you do see some people arguing for the UN to take that role) or nationalizing industries entirely (which you might encounter some other folks arguing for). The former doesn’t seem all that effective and the latter leads us to another core problem:

While liberal thinkers like John Rawls have criticized the concept of Utilitarianism, Liberalism does have its roots in that philosophy, and such basic ideas like “The greatest good for the greatest number” have remain highly influential. The problem with that is twofold, but let’s address the issue of “greatest good” first.

My personal feelings about both of those decisions aside, the danger is quite clear. What’s to prevent officials limiting or banning anything which they deem to be detrimental to their concept of the public good? Even if their views are indeed representative of the majority of the electorate (another problem we’ll come to in a sec), what’s to prevent a tyranny of the majority? In spite of constitutional guarantees, what’s to prevent a liberal legislature from taking away my cigarettes, my scotch, or even limiting my time on my computer “for my own good”? If the road to hell is paved with good intentions, then “well-meaning tyranny” is probably a gas station along the way.

III. Those Who Walk Away From Omelas

In her 1973 short-story, Anarchist writer Ursula K. Le Guin tells the story of an idyllic city, perfect in every way, shape, and form but for a single child, forced to live a life of abject misery so that the magic of the city can be maintained. One is forced to suffer so that thousands- millions- can enjoy prosperity and happiness.
If the thought of that makes your stomach turn, then congratulations, you have a shred of human decency. And that’s the basic problem with the “greatest number”- the inherent implication of which is that there are bound to be people who don’t get to share in that “greatest good”.

Now the easy counter-argument would be that “hey, we’re not going to be able to achieve perfection. We have to be realists.” While I’m not asking for utopia, the problem with “realism” is that it so quickly becomes “defeatism”- especially when we’re being “realistic” on behalf of others.

Which leads me to the next issue:

Liberals will pride themselves on their efforts to secure for the poor and underprivileged such basic services as housing, food stamps, utility assistance, and most recently in this country, partially-subsidized healthcare. In and of itself, there’s nothing wrong with that- heck, I work in that very system. I’m all for that- it’s the reasons behind it I take issue with.

I’ve heard it over and over from prominent liberal pundits that “Nobody’s arguing for ‘total equality'”.

The alternative would be a system wherein inequality is both tolerated and expected, and what I don’t think most liberals realize is that it’s going to be the same people over and over. We’re not talking about people from all classes and walks of life randomly ending up at the bottom, we’re talking about the folks who are already there having kids born to the bottom. You can throw scholarships, public education, and a host of other services their way, and while that’s going to help, it’s not going to solve the problem of an unequal burden on those who can’t afford it and have done thing to deserve it. Just for example, let’s say my parents were poor and had generally less access to the benefits and luxuries that the wealthy do. I’m a bright kid (if I don’t say so myself) and I have an opportunity to go to a good school but in my senior year one of my parents suffers a stroke. I could cash in on my scholarship or I could try finding a job to help out the folks at home. Sure people will sympathize with my situation, but hey “they gotta be realists”.

And that’s just the efficacy problem. What about the driving principle?

V. Caretakers of the Poor

My issue with much of the welfare system is the principle that seems to drive it- charity, rather than apology, management, rather than correction. Government programs targeting the poor and underprivileged often seem to exist out of a sense of sympathy than justice, and this feeds back into the idea of poverty and inequality as unsolvable problems.

Efforts aren’t being made to give folks what they’re owed but rather to offer some general sense of comfort, which means that (1) the efforts aren’t ever truly designed to be effective and (2) they’re handed out just as willingly to folks who don’t deserve them. I’ve said before that the “welfare queen” is by and large a myth, but there are indeed folks out there. There aren’t many of ’em, but they do take advantage, and the liberal response to this complaint seems by and large to be “well, who really cares?”. Again, fairness isn’t the end goal here- domesticating the underclass seems to be.

Poor folks are given just enough to assuage the guilty consciousness of those in power, or more accurately, to hold the underclass hostage when election time rolls around. One way or another, it’s neither effective nor equitable, and only reduces the poor from (potential) masters of their own destiny to the forever lost and damned.

I mentioned earlier the problem with representation, and that’s probably where Liberalism runs into the majority of its issues. For all the worry of well-meaning liberal tyranny, the simple truth is that such governments rarely seem to get that far. Advocating Capitalism and inherent inequality of wealth (to one degree or another) offers the opportunity for the wealthy to worm their way into permanent economic and political power, and we see this corruption all the time.

For example, the Mineral Management Service in this country was put in place specifically to monitor such sites as the Deepwater Horizon rig, which saw a catastrophic failure in 2010.

It was uncovered that this regulatory agency had been heavily bribed by energy companies, with compromises extended so far as drugs and sex. Likewise, the Food and Drug Administration and Federal Communications Commission have become rife with former employees and lobbyists of the very companies they now “regulate”.

Liberalism’s attempts to merge ethics, environmentalism, and sustainability with Capitalism has only served to cater to the whims of the wealthy while discrediting itself as a movement. As we’ve seen in the recent midterm elections, liberal ballot initiatives have had the backing of the public, liberal politicians have not.

And there you have it folks: the most basic, ideological failings of this country’s largest cultural and political force (no matter how self-sabotaging). You can blame leadership until the cows come home, but that’s not the problem (though it’s not helping, I’ll admit).

Now you might be thinking, “Gordon, you brandished blade of wit and sardonism, you complain and complain, but what solution’s are you offering?”

Well readers, I might have an idea our two to present to the table…

4 responses to “Why I’m Not A Liberal”