When Life Gives You Don Lemon

By now, most of you are probably familiar with the recent scandal involving CNN anchor Don Lemon’s comments to Joan Tarshis, an alleged rape-victim of Bill Cosby. Lemon had blindsided his guest with the question of “Why didn’t you resist”, which beyond being a shockingly insensitive thing to say to any assault survivor, carries with it a host of the most vile, victim-blaming myths imaginable. Time already has an excellent point-by-point take-down of Lemon’s statements, none of which needs my repeating here.

See, I started off writing this post with the intention of revealing the man as nothing more than an inept clown, motivated by bumbling incompetence rather than malice or spite. The more research I did, however, the less I found myself able to support that idea. There’s nothing innocuous or innocent about Don Lemon.

While many of us were probably unaware of Lemon until his “don’t get raped” comments (or his bull**** non-apology, which we’ll get to in a second), I actually recognized him the second I saw him. Back at the end of September, Lemon, along with co-anchor Alisyn Camerota, had an interview with Islamic scholar Reza Aslan.The “interview” (the whole thing seemed more reminiscent of a McCarthyist witch-hunt) swiftly degenerated into an agonizing fear-mongering session- the very memory of which still makes my blood boil. I’ll let the ever-entertaining Cenk Uygur (of “The Young Turks”) break the debacle down for you.

Both Lemon and Camerota returned to discuss the same subject later in the week and (without Aslan there to defend himself) spent their time snidely mocking the professor’s frustration and even linking it to the picture of “angry, hostile, Muslims.” Whether this kind of vicious back-biting is a habit at CNN I cannot say. What I can say is that for Don Lemon, it seems to be par for the course.

Similar to the aftermath of his interview with Reza Aslan, Lemon found himself desperately trying to cover his ass in the fallout of his rape statements, claiming “…As I said, I think that sometimes but you have to ask questions and I believe every journalist should be able to ask questions- and even if those questions are uncomfortable.”

Now that, in case anyone’s wondering, isn’t an apology, it’s a pathetic attempt at self-justification (Lemon, by the way, used nearly the same statement after his idiotic questions to Aslan).

“But shouldn’t journalists be allowed to ask questions, no matter how controversial?”

Again,  journalism is more than just asking whatever ignorant or fear-mongering **** just pops into your head at the time, but y’know what? I think I might be able to tolerate that if Lemon were able to at least have the humility and journalistic integrity to admit when he’s wrong.

Unfortunately, he doesn’t seem to have that. Check it out:

In spite of Lemon’s frantic attempt to save face, no, the definition of an automatic weapon is not subjective. An automatic weapon is a gun which fires continuously with a single pull of a the trigger, and is legal only for use by the military and law enforcement (and for the latter, usually only in certain circumstances). Lemon’s appeal to “semantics” (and most of his commentary throughout the video) is simply and utterly wrong.

And if Lemon were just a bad reporter, I might let that slide. After all, there’s no shortage of ethically compromised journalists out there. But it gets worse, with Lemon spewing out even more cringingly stupid and toxic messages.

Stop and Frisk is a highly controversial policy in place in New York City in which police are allowed to detain and search individuals without probable cause. The problem with this is that (1) it’s extremely unconstitutional and (2) really racist, with searches directly almost exclusively at young men of color. In spite of the studies and piles of evidence citing the policy’s bigoted usage, Lemon came out in defense of its continuation. Even after admitting himself that the policy was often racist, he stated “Would you rather be politically correct or safe and alive?”

Another one of Lemon’s “controversial” questions, and a textbook example of media fear-mongering. We’re presented with a false-dilemma,with basic freedom and civil rights painted as “political correctness” and an abusive, demeaning, racist exercise framed as “safe and alive”. Now speaking for myself, I can’t see why we have to choose. I don’t think that racial equality and public safety are irreconcilable opposites, but I’m eccentric like that.

I’m tempted to touch on Lemon’s egregious statements on the black community in general, but that’d take up another whole post just to get started, and dang it, I need my rest too.

So armed with that knowledge, now what? Well if there is something to be said in favor of Lemon (other than his corporal punishment stance- credit where credit is due), it’s that for all the ignorance and unearned self-righteousness, he’s just one man. We managed to bring down that hack Piers Morgan, surely we can do the same thing here.

So when life gives you lemons: 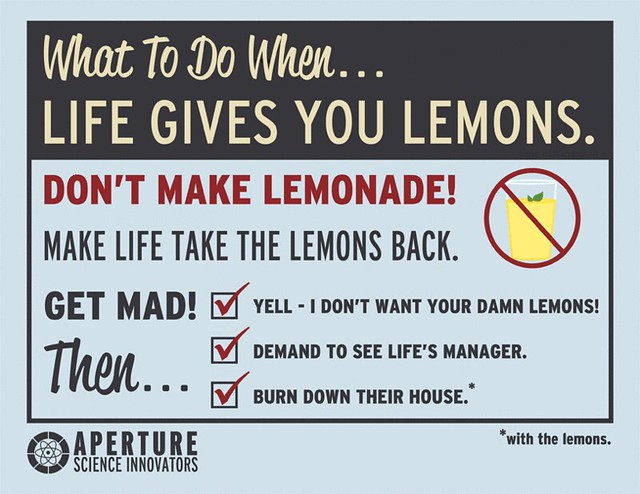 6 responses to “When Life Gives You Don Lemon”