2 Broke Girls, S4E14 “And the Cupcake Captives”: A TV Review

At long last there appears to be an overlap between one of my favourite superheroes [Spider-Man] and one of my least favourite TV shows [this one], in a way that has the former redeem the latter in its own way. In the fifth issue of Superior Spider-Man supervillain Massacre approaches the manager of a big business, offering to kill a large number of people while wearing a shirt bearing her competitor’s logo. Here’s a splash page of him making his offer:

Which is all to say that Caroline freaking out about their brand being tarnished by a criminal wearing their shirt is actually fairly reasonable. Associations are created by everything from getting a particularly messy stomach bug while eating a certain type of cuisine for the first time to seeing a billboard crush three NYC tourists to death on the news. What I do want to focus on, however, is what the man in question did.

It turns out that the guy, Richard Griffin, AKA “Beer Belly Gym Shorts”, kidnapped three women and kept them trapped in his apartment for months. Now I don’t know if you remember the last few times crimes like this have been uncovered by the law, but it is always incredibly disturbing. There is a large amount of rape, is what I’m saying. The episode veers very far away from any implications that this guy was guilty of such acts, but still expects us to think that him wearing their shirt is a big deal. It’s a very fine like that the show traverses, and its success is up in the air as far as I’m concerned.

This is also a great time for me to briefly cover my whole beef with their shirt business. I’m glad the plot exists in that it’s giving them something to do, but as I mentioned in a previous review I continue to have no idea how they are allowing Barry’s hip clothing boutique to sell their shirts while also doing so themselves. Caroline even voices my confusion aloud, saying:

“Interesting, now our shirts are available at both Rodney’s, a high end Manhattan  boutique, and an apartment building that always smells a little bit like gasoline.”

Mind you, the latter was true because Max was literally giving them away for free to people in their building. I’m no businessman, but I understand a little bit about supply and demand, and that what they are doing makes the opposite of sense.

As it turns out, however, the “Cupcake Captor”, as the media has taken to calling him, as essentially ruined their apparel business. Rodney’s returns the order they were sent and suddenly Max and Caroline are back at square one. Sort of. I mean, they still have their actual business of selling cupcakes, which they rarely touch on anymore, and continue to be waiters at the Williamsburg Diner. Even still, Caroline is concerned as they still have that business loan to pay back, and their largest form of revenue is essentially sunk. With eight episodes left there are a number of directions they could head to fix this problem, though they’d probably get there faster if they weren’t spending so much money on streamers-

Please, no applause for my effortless segue. This episode also follows Oleg and Sophie’s impending nuptials, with the two girls working on throwing a wedding shower for the latter. Not much happens besides Max realizing come the end of the episode that she should get into the spirit of things and use pink decorations instead of black ones-

– which you could define as a character beat, though I wouldn’t. It also involved another great line from Caroline when she asks “Are Polish people always early, is that a stereotype I didn’t know about?” I found this funny because the last time I can remember them really getting into Sophie’s cultural heritage was when she said that “cats are the reincarnated souls of people who die outside,” a comment that raised the ire of actual Polish people in the comments section of that particular review.

Honestly, between this and former Australian Prime Minister Kevin Rudd decrying the show for a racist joke about Australian Aboriginals I singled out a few weeks ago, 2 Broke Girls is still not doing so hot. It makes you wonder why they would choose to have the “villain”, in that he threatens their livelihood, take on the implicit role of serial rapist. Though I guess it’s not something we should think too hard on.

More optimistically, I am actually looking forward to what comes next. Obviously Sophie and Oleg will have to tie the knot before the season is up [I don’t think there’s too large a chance of them backing out of that, narratively], but it will be interesting to see what effect the Sword of Damocles that is their business loan has on them.

To end with, and because I didn’t want to save this to the Stray Observations, every time she appears Channel 2 reporter Maria Alonso Gonzalez very clearly enunciates her name in a way I imagine the writers’ room would describe as “ethnic”. I hate to break it to them, but her name has absolutely nothing on Carlos Chiang O’Brien Gambe, the news anchor from the Teenage Mutant Ninja Turtles show on Nickelodeon right now- 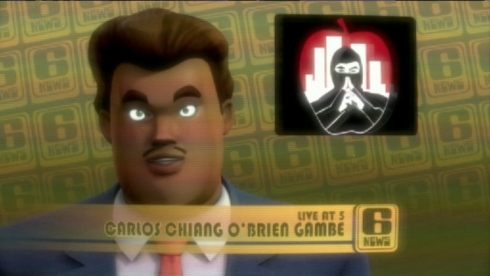 New Total: $1,475. Streamers are expensive, I guess? Maybe they also bought the food for Sophie’s shower as well.

The Title Refers To: Strangely enough, Richard Griffin’s captives, who actually don’t make an appearance in this episode.