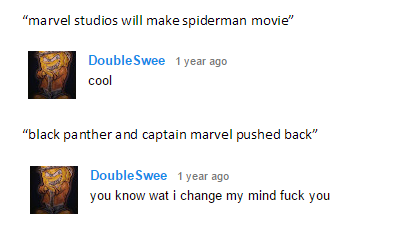 Because, honestly, this will be the sixth movie following the character, and the second reboot in five years! Spider-Man is straight-up one of my favourite superheroes but I have seen enough of him on the big screen for a lifetime. I am good with him not getting a solo movie, and I certainly don’t want to see one at the expense of Marvel’s only films helmed by a woman and a person of colour.

What hurts me more than almost anything right now is having to admit that this is all old news, and not the end of the story when it comes to Marvel Studios’ treatment of their upcoming Captain Marvel film.

“Now that Phase 2 of the Marvel Cinematic Universe has officially reached its conclusion with the release of Marvel’s “Ant-Man,” we have new details on what to expect in Phase 3!

Following our hero’s debut adventure in this summer’s ‘Ant-Man,’ Scott Lang will return alongside Hope Van Dyne on July 6, 2018 with Marvel’s ‘Ant-Man and the Wasp.’ The sequel will mark the first Marvel Studios film named after its heroine.

Additionally, Ant-Man’s second adventure will lead to a couple of other films shifting their dates, with Marvel’s ‘Black Panther’ moving up to February 16, 2018 and Marvel’s ‘Captain Marvel’ landing on March 8, 2019.”

Let’s lay out the number one fact right now, before addressing everything else: Captain Marvel, the one and only solo film in their lineup starring a female hero, has been pushed back another four months.

As for the rest of their announcements . . . look, I think the Wasp co-headlining a film is great. As they mentioned this is “the first Marvel Studios film named after its heroine,” but how are we supposed to rejoice about that when it pushes the previously announced Captain Marvel back a second time? Are we really expected to celebrate that a woman is co-starring in a comic book movie instead of just starring in it?

Again, I think the announcement is great, I think it’s exciting in its own way. It just sours when brought into context with the delay. I also want to say that hey, it’s great that Black Panther was moved up, even if it’s being moved up after it was already pushed back.

What’s particularly galling to me, though, is how Marvel appears to be downplaying what’s going on. Ant-Man and the Wasp is an obvious deflection, the studio giving us “what we always wanted” by sacrificing what we were already looking forward to. Also isn’t it convenient that on the same day the news was announced an interview with Captain Marvel co-writer Meg LeFauve dropped as well? Look, guys, this is still happening, just not for another four years.

Now’s probably a good time, as I’m wrapping up, to address those who consider to defend every single one of Marvel Studios’ decisions.

Yes, the second release date for Captain Marvel would have had it falling in direct competition with Warner Bros. new Batman flick, starring Ben Affleck. That’s a daunting task for any movie, let alone a property as unproven, thus far, as this one. My response to that, of course, is that it shouldn’t have been moved in the first place.

Another argument I’ve heard is that people calling for this movie are somehow in a rush. Someone actually responded to my complaints with the question: “You want it fast or you want it good?” Straight-up, though, as I said up above, they were already planning for this four years out. All that time and they haven’t even cast the titular character yet [Chadwick Boseman was revealed to be playing Black Panther quite some time ago].

I’ve also heard that these are “smart” moves by Marvel. A Spider-Man movie will always make them money. Sequels to successful movies will make them money. There’s no proof that Captain Marvel will make bank, so they’re just making business-savvy decisions. Hearing this we should probably ask ourselves, why make one at all? Why try to do anything?

My last point is more of a direct question to Marvel Studios as a whole, which is “Are you waiting for DC/Warner Bros. to catch up?” I already covered back in May how their Distinguished Competition are soundly defeating them in regards to casting people of colour, but now they want to let them get ahead with female characters as well? Black Widow has starred in four Marvel movies and gotten no closer to her own solo. In 2017 Gal Gadot will helm Wonder Woman. Captain Marvel won’t be released for another two years after that.

I shouldn’t have to say it at this point, but I’m frustrated. I’m tired of these safe bets with sequels, with unproven properties which just so happen to headline women and people of colour being shunted around at the drop of a hat. I want Marvel to be serious about these other characters they claim to care about. And I won’t try to explain to people how they’re really doing the right, or smart, thing until I see evidence of that.

2 responses to “Captain Marvel Pushed Back Again, Company Apologist On Verge of Giving Up”