In With the Old [And In With the New]: The Silver Lining of Intertextuality

Last Friday I asked you all to watch a short video on the concept of intertextuality, which provides the basis for this week’s post.

While Nerdwriter1, the YouTuber responsible, initially describes the device as “something in a text, in this case a movie, that is shaped by another text” he later goes a step further in making the term distinct from mere allusion. Contemporary intertextuality, which he refers to as being “weaponized”, is defined as:

To use my own visual example, successful intertextuality results in a combination of:

Being able to recognize and understand the reference is important, but equally essential is having that recognization elicit feelings, whether they be of awe, or joy, or pleasant surprise. Simply identifying a shot in a film as the replication of a comic book panel matters most if you care[d] about that original work. END_OF_DOCUMENT_TOKEN_TO_BE_REPLACED

END_OF_DOCUMENT_TOKEN_TO_BE_REPLACED

I like a lot of things, guys and girls. I like comic books, as the title of this post attests to, but I also like Marvel, and movies, and mythology. Taking all of that into consideration there is absolutely no reason why I shouldn’t have liked the sequel to 2011’s Thor. I mean, that film took The Warriors Three, consisting of Hogun the Grim, Fandral the Dashing, and Volstagg the Voluminous [i.e. fat], and cast the Japanese actor Tadanobu Asano as the former.

I should hope that you know my feelings about racially diverse casting by now, but really the expressions below sum them up pretty nicely.

From left to right: Hogun, Fandral, and Volstagg.

END_OF_DOCUMENT_TOKEN_TO_BE_REPLACED

And needless to say, we’re all just sitting around trying to figure where to go from here. Some people are saying we should just start the series over again.

And honestly, that’s not the worst idea in the world. Similar to Arrested Development (excluding the miniseries), there’s a ton of hidden symbolism and foreshadowing that definitely gives the series plenty of rewatch value. Heck- you could just try tracking down the last few stubborn heretics who haven’t seen the show yet and watch them watch it. Which reminds me- anyone who hasn’t seen the finale should probably tune out now. I’m going to try to avoid spoiling anything, but just to be safe, better add CWR to your media blackout for the next 24 hours or so.

END_OF_DOCUMENT_TOKEN_TO_BE_REPLACED

Be Thankful For Your Three Seconds of Star Trek

This is going to be a fairly short post, you guys. I leave for a college reunion in about an hour, and am running a little short on time. Maybe stay tuned for a longer one tonight, though.

If you’ve been reading this blog for a while [and really, who has?] then you probably know how I feel about movie trailers and previews. I was more excited than anything for this year’s The Avengers, but the amount of content they put out before its release was almost enough to rid me of a lot of my excitement for the movie.

On last night’s episode of Conan brought in director J. J. Abrams, and with him a clip from the sequel Star Trek into Darkness. Fans all over America huddled in front of their TVs in anticipation, only to see this:

The clip is all of three frames long.

Understandably viewers were  more than a little disappointed. Honestly, I was as invested in the franchise as the average Trekkie, I imagine I would be too. Abrams lets us know leading up to the teaser that this is a scene where Spock is in a suit of some kind and is also in a volcano. Cue scene, cue outrageous applause from audience.

That might’ve been great for the studio audience, but not so much for people in their homes. Still, it’s good that a 2013 film has the restraint to not start bombarding people with footage.

And speaking of restraint, it seems like that’s what anyone who’s into film needs nowadays. It was my own fault that I found out exactly why the armour Stark wears in Iron Man 3 is the Mark XLVII. Do not look it up, it is a huge, enormous spoiler that will let you know a major plot point, as well as cause you to curse your need to know more and more bitterly.

With the way internet and the media work today, spoilers and leaks abound. It’s up to the viewers who want to preserve their theatre viewing experience to keep a modicum of self-control and not constantly keep checking comic book movie sites [this is more a message to myself than anything else].

What I’m trying to say is, be grateful, Star Trek fans. You have over half a year until Into Darkness comes out. Three seconds should be enough to tide you over for at least another month.

The Marvel Cinematic Universe Moves On [Without The Black Panther]

We all saw The Avengers; let’s not lie to ourselves here. It’s the third highest grossing film of all time, and we are the reason for that. As of earlier this month Joss Whedon was confirmed as returning to direct the sequel, with the film due to hit theatres on May 1st, 2015.

With a bit of a wait between movies, a buffer of films is currently in the works, including sequels Captain America: The Winter Soldier, Thor: The Dark World, and, probably the most highly anticipated, Iron Man 3. Also on the docket is the spacefaring super-group Guardians of the Galaxy.

All of this news pleases me. What’s problematic is that when researching this article I found out that the Marvel Studios have a model of “releasing just two films per year.” So let’s see what we have here:

With those four films taking up the next two years a horrifying fact emerges: 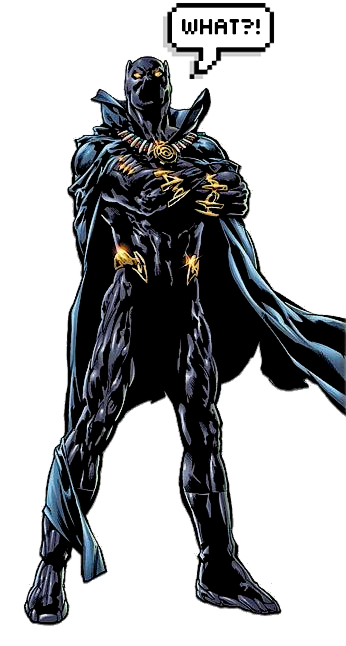 Marvel will not be making or releasing a Black Panther film before the next Avengers movie comes out.

Let me back up a little. Black Panther is, as comic book fans know, T’challa, the king of the fictional African nation of Wakanda. It is an extremely technologically advanced country, and the character himself has a PhD in physics, as well as being a master hunter, martial artist, inventor, and politician. On top of that he wears a suit made of vibranium, the same stuff Captain America’s shield is made of. He’s like if Batman were also the president and he is awesome.

Adding the Black Panther to the Avengers’ roster is not only has precedence in the comics, but it would also add the much-needed diversity that the first film was so sorely lacking. Marvel Studios co-president Louis D’Esposito discussed the possibility of a film starring the Wakandan king by admitting that:

“He has a lot of the same characteristics of a Captain America: great character, good values,”

Which is true. But he doesn’t stop there, going on to say :

“But it’s a little more difficult, maybe, creating [a world like Wakanda]. It’s always easier basing it here. For instance, ‘Iron Man 3’ is rooted right here in Los Angeles and New York. When you bring in other worlds, you’re always faced with those difficulties.”

Cue outrage from fans everywhere. The general argument against the statement above being that a sizeable portion of Thor took place in Asgard. Asgard, the mystical dwelling of the Norse gods. But playing devil’s advocate, as I try to do, perhaps Marvel execs are afraid of portraying Africa badly. Counterpoint: Wakanda is a pretty well-to-do place. Point: maybe they’re afraid of portraying the continent insincerely? Counterpoint: it’s a comic book movie. Point: but, but, but . . . Counterpoint:

Those eyes sneer at D’Esposito’s claims.

Djimon Honsou is a number of things. An immensely talented Beninese American actor is one. The guy everyone wants to play the Black Panther is another. Honsou actually voiced the character for a short-lived TV series on BET which was essentially a motion comic.

Honsou himself has said in a 2010 interview with MovieWeb.com that:

“It is true that I have said certain things about it some time ago and that I would love to play the Black Panther. Also the opportunity came to do the voice over for the animation so I did that, maybe in the hopes that one-day they would finally get around to doing a movie. We have so many super heroes, but none that really defines the African American. I thought it could definitely happen and I have tried to push that envelope before.”

And if that wasn’t enough, Stan Lee himself is on the record as answering the question “What obscure characters would you like to see adapted into a big budget film?” in an AmA [Ask Me Anything] on reddit. His answer was this:

“Black Panther. He’s not too obscure, I hope.”

If the fans, the actor, and Stan “The Man” Lee [who also co-created the character] are all pushing for this there’s really no reason it should not or cannot happen. All that’s standing in the way are a bunch of executives too willing to take the way that’s “always easier.”