The Character Assassination of Sam Wilson by the Publisher Marvel Comics

In July of 2014 it was announced on The Colbert Report that a momentous event would be occurring in the Marvel universe. The blonde, blue-eyed Steve Rogers would be stepping down as Captain America due to rapidly aging, with the mantle passing on to his partner [not sidekick] Sam Wilson aka The Falcon. As is typical for the industry the cover for Captain America #25, in which the event takes place, promised some level of mystery with a white silhouette asking readers to guess who it would be. 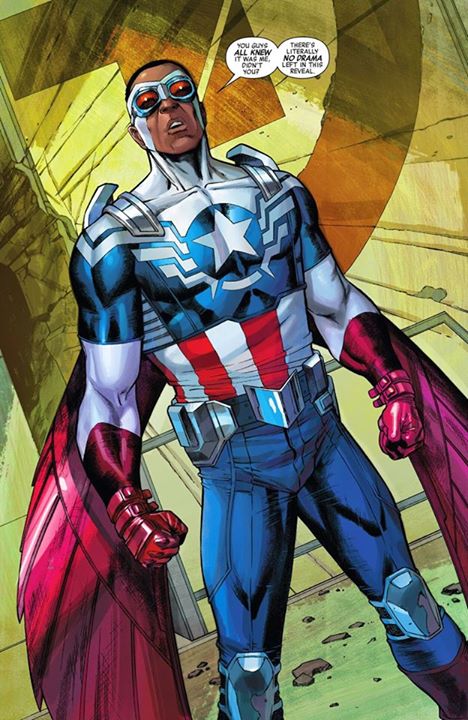 As Sam himself states in the splash page on the right [I realize that the text is far too small for you to read]:

“You guys all knew it was me, didn’t you?

There’s literally no drama left in this reveal.”

The words are particularly tongue in cheek, with the writer himself acknowledging that even without the announcement on national TV it had always been fairly obvious who would be the next character to bear the shield. Captain America and The Falcon had been compatriots since the late 60s [even sharing a title], so there were few more deserving individuals than Samuel Thomas Wilson.

Now I was, and still am, all about this. To have as high profile a role as Captain America, a title that represents an entire nation, be given to a Black man is enormous. I’d also always been a fan of Sam as The Falcon. I added the title to my pull-list immediately.

I’ll Justify the Title, But First, This Week’s Events and a Rough Thesis

Now just this past Tuesday, roughly a year and a half after the original announcement, Marvel released the news that Steve Rogers would be returning as the ol’ Shield-Slinger.

This isn’t to say that the book on the left, Captain America: Steve Rogers, would be replacing the currently running Captain America: Sam Wilson. Instead the publisher’s plan is to release both side by side. They will also be penned by the same writer, Nick Spencer, a move which there has been plenty of precedent for [Jonathan Hickman on both Avengers and New Avengers, Brian Michael Bendis on All-New X-Men and Uncanny X-Men, etc.]. Oftentimes both titles will act as separate halves of a larger story, though that hasn’t been confirmed in this case.

This announcement was met with a similar lack of surprise across the internet, largely because Captain America: Steve Rogers coincides with the release of the summer blockbuster Captain America: Civil War. A number of changes have been made to the comic books to have them fall more in line with what happens up on the big screen, and slapping an “A” back on the forehead of the face most of the world knows and loves is generally seen as a solid business move.

Now I am fully aware of how incendiary the title of this blog post is, and hope to justify it by explaining how the existence of two Captain Americas is not similar to the same being true of other heroes, with the reason for that largely being justified by the character’s recent publication history. It’s in the exploration of that latter point that I truly hope to rationalize the words “character assassination.”

As with every article I write, I’ve done my best to make this accessible to both those who do and do not regularly enjoy comic books. If you have any further questions please don’t hesitate to drop me a line in the comments far below. END_OF_DOCUMENT_TOKEN_TO_BE_REPLACED