What Would Make For A Good Christian Movie?

It seems like a lifetime ago that this blog’s editor and yours truly discussed the question “Why is Christian media so bad?”

Like there are dirty limericks carved into the side of gas station bathrooms with more artistic and spiritual merit, and for anyone who doubts me I’d challenge you to watch God’s Not Dead 2, which premiered on the first of this month.

As much as you might pray otherwise- no, this is not some elaborate April Fool’s trick. This wretched, pandering slog of garbage is absolutely real, the hellspawn of 2014’s disturbingly popular (and obliviously sacrilegious) God’s Not Dead.

Look, as much as I’d like to pour out seven bowls of wrath upon this nasty, ugly product of a nasty, ugly franchise, I’m not going to. There are people who’ve already done so with more eloquence than I could muster, and I legitimately think I’d have a stroke if I tried to convey my repulsive and rage to this unholy dreck. If you’ve got a shred of artistic judgment or basic morality, you can see what makes this movie bad.

So let me ask this instead:

Here’re some of my ideas-

The God’s Not Dead franchise has a habit of using death and disease to hamfistedly make its points. Is the prideful atheist looking down her Ivy-League nose at these simple, humble Christians? Smite her with cancer! Haha! She’s not so high-and-mighty now that she’s facing a slow and painful death! Thanks, God!

It’s OK! She converted and has been miraculously cured! Because no God-fearing person has ever died of cancer and no atheist has died of anything else!

But that doesn’t happen.

To quote my favorite book of the Bible, “In this meaningless life of mine I have seen both of these: the righteous perishing in their righteousness, and the wicked living long in their wickedness” (Ecclesiastes 7:15, NIV).

In other words- **** happens, and there doesn’t seem to be much justice behind it. 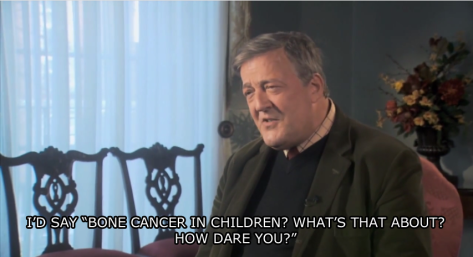 Stephen Fry, speaking on what he’d ask if he met God.

Instead of making the absurdly cruel and heretical claim that disease and suffering are divine punishment, why not actually try to grapple with the frightening and upsetting realities of sickness and mortality? Why not make an honest, heartfelt attempt to make some sense of the senseless- to provide something beyond insincerely quoted Bible verses.

Hell, it’s not like the source material doesn’t exist. Maybe you could give us a movie about a good guy who’s living the American dream- only for it all to fall apart and for him to left wondering why. Maybe his wife and a few of his old business partners could swing by his shack and converse with him about how he’s supposed to come to terms with his situation. A challenge, certainly, but with an open mind, some clever dialogue, and some character building, I think you’d be able to pull it off.

And no, before anyone starts salivating- this is absolutely, 100% not an invitation to claim that faith will heal you of their your physical or spiritual afflictions. If the movie’s going to be honest (and maybe it could be the first Christian movie ever to be so), it’s going to have to leave the ending ambiguous. Present all sides of the issue and let the audience arrive at their own conclusions- it’ll be a whole lot more effective (artistically and religiously) than using a concrete message to beat ’em into submission.

The German pastor who was executed by the Nazis for his failed attempt to assassinate Hitler- an action that remains controversial among Christians even to this day. With so many self-proclaimed believers applauding calls for war
surely a movie dealing with the difficult issue of justified violence would be appropriate.

And maybe it’d be exciting- heaven knows a bit of suspense would be a breath of fresh in in an industry where every movie ends with “and then everyone was saved and didn’t have any more problems.” Sure, everyone will know that Bonhoeffer fails- but the nail-biting tension of the conspiracy unraveling, that would make for a good movie. Same goes for John Brown- the American abolitionist who made a failed attempt to lead a slave insurrection. Were his violent vigilante actions against the government justified? Where’s the boundary between being a good citizen and being a good person? Shoot- you could even scrap the whole backwoods skirmishes and just show a courtroom drama. That would beat the smug **** out of God’s Not Dead 2.

Just imagine how metal the cover art would be…

I think that one of the greatest failings within Christian media is the assumption that every protagonist has to be a shining, sterling epitome of all Christian values. I’m talking about your all-knowing, all-wise pastors; your gentle and ever-supportive housewives, your impassioned, never-doubting young folks, out witnessing to a unappreciative and oh-so-wicked world.

The Flanders, only without the sarcasm.

Let’s stop having every single character convert during the two hours of the movie. It often feels weird and downright manipulative.

I don’t think any Christian would make anything close to a James Bond movie, and yet Christians don’t shy away from enjoying the series. And there is something so terrifically wrong about that picture right there.

“But Gordon, you vicious and unexpected inquisitor! It’s about the general theme of things. Sure, James Bond isn’t the greatest guy- but nobody is saying he is! What’s redeeming about the series is the inherent quality of the movies and the general struggle of good against evil!”

OK, so if you can enjoy a movie like that, guilt-free, then why can’t you ****ing make one?

“What? With explicit nudity and graphic sex scenes?”

Nah, they don’t have to be graphic- but there’s nothing inherently harmful about some appropriate nudity and you can’t ignore sex outright. At the very least, the topic needs to be engaged with without the ****ing director having to switch out with his actors for kiss scenes.

“But would James Bond still sleep around?”

I’d say yeah- that’s part of who he is. And while it was a shallow and often misogynistic part of earlier Bond installments, they really show Craig’s Bond’s womanizing as being a part of his broken character. All of his “conquests” leave him empty- clearly there’s something he’s missing, and he’s all the more human for it.

Though most human’s don’t drink whisky with scorpions. Unless you’re me, and you drink whisky in an apartment with a scorpion problem. Ask Evan- he’ll tell you.

So we don’t need a Christian James Bond- we don’t even need another James Bond (it’s what we have James Bond for). But what we could use are some movies that are satisfied with just being movies- that hold empathy as being as important (if not more important) than evangelism.

Game Of Throne of Thrones

It wasn’t so long ago that influential writer, megachurch pastor, and open misogynist John Piper railed against HBO’s wildly popular series, Game of Thrones. Piper likened the show to “re-crucifying” Christ, which is a strong analogy even by my standards (and I’m a guy who likes his analogies like I like my women: so strong that Piper would be intimidated by ’em).

And Piper’s complaints about GoT’s sex and violence seem a bit hypocritical, seeing as how the Bible ain’t exactly free from the old ultraviolence itself. We’ve got torture, executions, genocide, natural disasters (are they still “natural” disasters if Jehovah pelts you with ****ing frogs?). There’s incest, rape, slavery, seduction, a whole book devoted to some of the weirdest sexual metaphors you can imagine.

Look, I could go on here, but we’d be listing stuff off all day. Suffice it to say that Game of Thrones has nothing on the Bible.

So why not work with that?

Use the Bible’s stories of political intrigue, epic journeys, and bloody battles to create a what so many folks have waited for- a true-to-the-source, TVMA play-by-play of the Old Testament. And yeah- before anyone reminds me, they did try to do a take on this with a show called Kings, based loosely off of the rise of David. I really, really enjoyed that show, and I think it’s a shame it got cancelled.

Seriously- it had Ian McShane playing King Saul. How do you cancel a thing like that?

And apparently ABC is making a historical drama also based off King David (and produced by Reza Aslan). Clearly there’s a wide market for this stuff. If Christians are so convinced that they have no say in today’s culture, well, there’s no better opportunity than here.

Or maybe instead of shrieking with apoplectic horror that we have a show called Lucifier– maybe you could do something along those lines. A comedy, for a change, might do something to dispel the idea that Christians can’t take a joke.

There is show after ****ing show that deals directly with the supernatural. You’ve got Ghost Whisperer (yes, there’s at least one ghost in the Bible- deal with it), The X-Files (soooo glad they’re back), and a show literally called “Supernatural”, which is pretty much nothing but angels and demons locked in epic struggle.

So where other shows throw in drama, why not go for something more lighthearted. Like a show where an angel gets assigned to some very average Joe Schmoe and the two of ’em grapple with morality in a world where doing the right thing really isn’t as simple as folks might make it out to be. With our culture’s willingness to believe in angels and demons, you can’t tell me there’s not room for a divine comedy.

…the first damn God’s Not Dead netted over 62 million dollars.  Don’t try to tell me that money’s what’s stopping folks from upping the quality. From that faith that gave the world the Sistine chapel, Lord of the Rings, and the entire works of Bach- I cannot, I will not believe that this is the best you can offer.

This is why we can’t have nice things.

3 responses to “What Would Make For A Good Christian Movie?”