While the Overwatch League, Blizzard’s high-profile international esports endeavour, is well underway (#RiseTogether), casual players who are in tune with the ebb and flow of the game’s content await with bated breath. With the end of the month fast approaching, history dictates that sometime within the next week or so a new hero will be announced, with the latest addition to the roster going live close to the end of March (see: Orisa and Brigitte’s respective release dates).

A new hero is an exciting prospect for a number of reasons, with competitive players hoping for a chupacabra to finally kill the GOATS meta and lore fiends longing for something, anything, to forward the molasses pace of the universe’s story. It’s also an opportunity for a particular contingent of fans to ask, once again, when the award-winning shooter will finally create a playable Black woman.

Similar to my breakdown of the character of Ned Leeds in Spider-Man: Homecoming and his relationship to Ganke Lee from the comic books, I will be creating a thorough chronology that highlights select dates in Overwatch‘s history, as well as the public outcry for a Black female hero. Unlike the earlier article, however, I will also be providing my own commentary on why this is so important to some (and perhaps should be to everyone).

November 7th, 2014: Overwatch is announced at BlizzCon, an annual gaming convention that celebrates Blizzard Entertainment’s games and their countless fans, marking their first original IP in 17 years. While a cinematic trailer spotlights four key players in the universe’s lore, a gameplay trailer focuses on the 12 heroes currently available at that time.

Notably, even at this early stage the roster featured a surprising amount of diversity, with the Egyptian combat-armoured Pharah and Indian light-bending Symmetra. 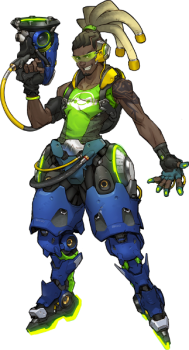 Lucio (as seen on the right), a world-famous DJ-turned-freedom-fighter, appears to be Afro-Brazilian (and originates from that country).

December 7, 2015: In one of the very first (and soon-to-be heavily memed) Developer Update videos, game director Jeff Kaplan discloses that all future content for Overwatch
(“additional maps and heroes that we’d like to add to the game”) will be free, indicating that the number would not stay 21 for long.

The mother of the aforementioned Pharah, many remark that having an older woman of colour as a playable character is unprecedented in first-person shooters.

February 21, 2017: An interview with 11-year-old Efi Oladele, a young inventor hailing from the fictional African nation of Numbani, is released on the Overwatch website.

Fans correctly speculate that this is a teaser for the soon-to-be-announced 24th hero. Players also point out the obvious issues with adding a minor to a game that, while it does so in a somewhat cartoonish manner, involves characters murdering one another through various means. Many believe that the new hero will be the long-awaited Doomfist.

March 2, 2017: Hero 24 is unveiled, with the quadrupedal omnic Orisa being the newest and (at the time) one of the most unique additions to the game.

Orisa is voiced by Black British actor Cherrelle Skeete, who uses a West African accent for her representation of the character.

The 45-year-old Nigerian terrorist is voiced by Sahr Ngaujah, an actor of Sierra Leonean descent.

June 28, 2018: After months of debating who or what “Hammond” could possibly be, Overwatch’s 28th hero is announced using the moniker “Wrecking Ball”.

A genetically engineered hamster that rolls around in a deadly mech, this was not the character that many expected.

One Twitter user pointed to two particular Overwatch agents that flashed across the screen during the animated short “Recall”:

Others joined in pointing out that Blizzard chose to add a rodent to the game instead of a Black female, while still others fire back decrying the need for “forced diversity” and admonishing the critics for being killjoys, among other defences.

November 2, 2018: Another year, another Blizzcon, and another hero to be revealed. This time it’s Ashe, an outlaw who debuts, and was inspired by her role in, the studio’s latest cinematic offering.

During her announcement her concept art is shown, which exposes the fact that at one point during her creation the developers considered making her a woman of colour.

A sizable contingent of Overwatch fans on Tumblr express their disappointment.

November 5, 2018: Over at Kotaku the first snippet of Nathan Grayson’s series of Overwatch interviews is published, titled “Blizzard Explains Why Overwatch Still Doesn’t Have A Black Woman Hero“. There are two excerpts worth highlighting, with the first being from the face of the game himself:

“I think if you look at the history of Overwatch, there’s been such a wide variety of people that we’ve represented in the game,” game director Jeff Kaplan told Kotaku at BlizzCon last weekend. “We have no shortage of heroes that we’re currently working on secretly back in Irvine. Right now I think the number’s around six that we have in development. I don’t think people are gonna be disappointed.”

The second is a comment from fellow Kotaku writer Gita Jackson, who Grayson notes has been covering this same issue on her own:

“Every time Blizzard has announced a new hero, there have been fans asking when there will be a black woman. There are so few playable black women in games in general that to be consistently overlooked by a development studio who explicitly wants Overwatch to feel diverse and international feels upsetting,” she said. “They made a hamster and a second cowboy before they made a black woman. It just feels like we’re not a priority, and while I can’t tell them what to do, I feel like they’re under-serving a part of their fanbase that clearly wants to throw money at them.”

November 14, 2018: On Polygon‘s Overwatch portal, Heroes Never Die, Cass Marshall pens an article called “Ashe re-raises questions about hero diversity in Overwatch”, in which she also takes note of the criticism that the 29th hero has garnered.

Assistant game director Aaron Keller shares some insight as to how Ashe came to be, plainly asserting ““We want to have a diverse lineup.” Marshall also mentions that “Keller acknowledges that there are fans who want more, and the team is listening to the feedback.”

January 8, 2019: Gita Jackson publishes her piece, “Overwatch Fan’s Letter To Jeff Kaplan About Black Women Gets Heartfelt Response“. The article covers Vivian Phillips, a 23-year-old Black woman who wrote the game director back in 2017, sharing her desire to see a Black female hero in Overwatch. Kaplan’s response is lengthy, acknowledging the importance and impact of art and the game he and so many developers are working on.

“P.S., we have multiple Black characters in development,” he added. “One of them is coming soon.” That character would end up being Doomfist.

Down below, in the comment section, one reader asked:

At the time of the letter you had Symmetra, Pharah, Ana, and Sombra. What the hell else do you want?

February 6, 2019: Two days after it drops, Jackson writes one of many articles to come about Apex Legends, titled “Sadly, It’s Surprising That There Are Two Black Women In Apex Legends“. Jackson never outright lambastes Overwatch‘s lack of Black women, only mentioning that “Like Overwatch, the stated backstories of these characters don’t matter much when you’re actually in the fray.”

The two playable characters are Bangalore, a military-brat-turned-soldier, and Lifeline, a combat medic.

The URL leads to a recovered strike team log that recounts a mission to retrieve (or eliminate) someone named “Jean-Baptiste Augustin”. Pronouns reveal Augustin to be a man, and the writer of the letter shares that they have “never known a medic to be such a good shot, and his adaptability to new situations is a rare talent,” among other things.

Blizzard has been known to create misdirection when it comes to announcing new Overwatch heroes, and having the focus be on whoever Augustin is doesn’t necessarily preclude Hero 30 from being a Black woman. That being said, I do want to briefly respond to any readers who are wondering why I bothered compiling this timeline at all.

In the United States roughly 13% of the population can be categorized as Black, which, according to the U.S. Census Bureau, is “a person having origins in any of the Black racial groups of Africa.” This demographic includes tens of millions of women like Vivian Phillips and Gita Jackson, every single one of whom deserves, just like anyone else, representation in media. Now this may take the form of literature or television or film, which all offer it in varying amounts, or it may be searched for in more interactive forms of entertainment. While population size should never be the sole dictator of who is offered a spotlight at any given time, surely this should be taken into account?

Reading Phillips’ letter and Kaplan’s response should be argument enough for why it’s so critical that people be able to see themselves reflected in the world around them (as well as countless articles on this very site). It also shouldn’t be necessary to have to reaffirm the fact that there are currently no playable Black women in Overwatch.

A recent thread on /r/overwatch linked to the following tweet-

Overwatch has no playable black women as of three years of updates and Apex Legends has two on the launch day. Damn I guess it wasn't actually that hard to do at all

-with the title being “Like wtf really… You are that bothered by it”. The comments section is largely made up of redditors trying to convince the original poster that Symmetra and Ana and Pharah do not count as Black women. While the term may suggest otherwise, Blackness is so more than the complexion of a person’s skin, and there is a difference between continents (see: Africa and South Asia) as well as parts of a continent (see: Canada and Mexico). Women of colour are not a monolith. While intersectionality and solidarity mean that we’re able to acknowledge strides in progress for others, that doesn’t necessarily mean that they are as effective for us, whatever our background may be.

If the past is any indication, and given that hints were dropped as recently as last Thursday, a new hero will be announced by the end of this week. A new teaser may even be released within a few hours of this being published. At this point it’s no mystery whether or not the roster will be growing in the upcoming days, but whether or not Kaplan and company will follow-through on their assertion that they are and have been listening to fans. A Black woman in Overwatch. It could happen this week, but will it?