Daphne Blake, played by Sarah Jeffery in the 75-minute film produced by Ashley Tisdale’s Blondie Girl Productions, starts her first day at Ridge Valley High by asking her smart home to turn up her pump-up playlist. She walks over to her ClotheMe Closet™ and tells it that she’s looking for “the perfect first-day of school outfit”, dresses in the robotic wardrobe’s selection, and descends the stairs while musing aloud that she hopes that it’s French toast she smells. 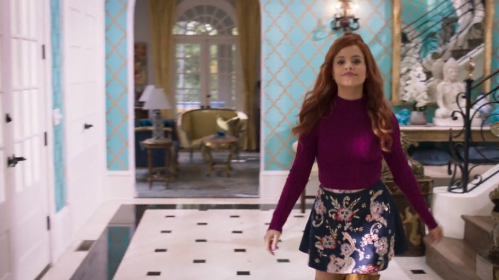 Sitting down to her accurately guessed breakfast, she makes small talk with her family before noticing a book on the table. After she asks what it is, her father tells her that “those are the moons of Saturn.” After flipping through it she addresses her parents’ concerns about the big day ahead by telling them that “School’s going to be awesome. Things always have a way of working out.”The optimistic teen’s luck continues throughout the day, with her avoiding a face-first collision with a thrown ball, having Saturn’s moons pop up in a science class, and somehow scoring sushi from the cafeteria while her friends are stuck with sloppy joes. It’s not until later when she gets home, after the outset of a mystery that I cannot get into right now, that the truth is revealed. (OBVIOUS SPOILERS TO FOLLOW)

“I so wanted your life to be perfect,” Daphne’s father confesses to her. Every single thing that has fortuitously worked out in her life has been because of him. Mr. Blake not only masqueraded as a lunch lady to serve her California rolls, he was also the musician behind the bop that scored her morning. He even did four years at the Parsons School of Design in order to effectively be the mind behind her automated outfit selection.

It’s not difficult to connect the dots between the childhood of one fifth of Mystery Incorporated and the college-admissions scandal that continues to plague our 24-hour new cycle. Like many parents Daphne’s father merely wants what’s best for his daughter, and for her to find success and happiness in her life. Yet that goal is ultimately achieved by the children in question being coddled, which in turn creates adults who, in all likelihood, are wholly unprepared for the realities that life has to throw at them.

Criticism has rightly rained down on those involved, in particular the parents as well as the organizations that allowed exorbitant amounts of money to pave the way to academic achievement. In some cases the children themselves have been targeted, and rightly so, with actor Lori Laughlin’s daughter, Olivia Jade, receiving flak for relatively banal tweets about post-secondary education that now drip with both irony and ingratitude.

Source: Twitter (for as long as it stays up)

Joining the myriad of thinkpieces as this scandal continues to unfold is one written by Will Stancil for The Atlantic, which highlights the fact that many of the students who benefited were kept entirely in the dark. In a line that feels like it could apply to young Ms. Blake herself, the author points out that:

“…it’s also worth considering how events would have appeared from their perspective. A high ACT score would have seemed like just another stroke of good fortune in a life full of it. [. . .] They mistook the secret forces working on their behalf for their own natural talent. If you can’t see the hidden hand behind your success, what other explanations are there besides luck and ability?”

Daphne begins her day at yet another new school knowing that she has flourished at every educational institute she has attended. Her attitude is one of complete confidence. There’s no fear of failure because it’s not something that she has ever tasted. Having a figure in the shadows who puts their body on the line to protect you from even the most minor accidents takes things to the extreme, but the events of Daphne & Velma are seemingly not far off from reality.

Unlike the dozens of students who have been caught up in the midst of their parents’ actions, Daphne uncovers the strings her father has been pulling before it’s too late. To start with, Nedley Blake apologizes to his daughter, seemingly remorseless that he was caught, and instead aware that his having lied to her about her abilities was a mistake. On her part, Daphne gets to the heart of the matter, shouting:

“Dad, how could you? You’ve literally sheltered me my whole life!”

When her mother comes to her father’s aid by pointing out that he was only trying to protect her Daphne reasserts:

“I don’t need protection, okay? I can handle myself.”

It’s not to say every college-hopeful whose parents had the wealth needed to access the so-called “side doors” into these schools would have reacted similarly. In fact, we know that at least one student, Isabelle Henriquez, knowingly went along with a scheme to raise her SAT score. Many have pointed out that the apple doesn’t fall far from the tree, and that in all likelihood those who blindly accepted their fortune-filled lives would probably have willingly gone ahead with these illicit boosts to their academic careers. That said, how can we ever be certain?

The issue of privilege, whether attached to one’s race or otherwise, is hotly contested by those who are said to be receiving the benefits. When advantages are pointed out they’re perceived as being attacks on their character instead of simple insights on how the world as we know it operates. What then might happen if those privileges, in this case financial, are actually exposed? While not always possible, might this be a case in which the privileged actually refuse the leg-up and attempt to succeed on their own merits and abilities? When starkly informed that their achievements are not their own how many students might have rebelled, possibly even steering their lives in an entirely different direction?

As hyperbolic as this title is, and given that Daphne & Velma is feature-length children’s entertainment that wasn’t even able to make it to the silver screen, there remains the genuine possibility that this plot line dedicated to the acknowledgement of invisible forces that equate to “good luck” might be recognized as being reflected in the lives of students, and understood by wealthy parents as being harmful to their children. In the case for Scooby-Doo being educating and teaching us life lessons, there are far worse contenders than this one.