Violence (Not) In Media

In the wake of the Aurora Shooting, the Sikh Temple Massacre, and a recent spate of gun violence across the country, the debate of the violence in media has once again reared its head. On one side, those who cite the saturation of film, music, and video games with violence and the glorification of violence as responsible for creating these monsters, or at the very least, pushing them over the edge. On the other side, the ranks of apologists, who declare that it’s ridiculous to blame movies and music for mass-murder.  I’m not here to analyze the claims of either point, or to make an argument for one side or the other- that’s already been done better by The Escapist’s Robert Chipman (check it out here).

No, I’m here to address the subject of violence and its possible contributing factors outside of film and music.

When I touched on a complaints I had with movies like Brideshead Revisited and I Love You Man a few weeks ago, I briefly mentioned goth-rock-star Marilyn Manson, whose music was accused by many of being responsible for having influenced the Columbine shooters in committing the massacre. Interviewed by Michael Moore in his documentary Bowling for Columbine, Manson had this to say regarding violent influences:

And therein really lies the crux of the issue- when tragedies like this happen, the scope of our outrage is usually so small that we fail to take into account all the other possible factors. We can cite GTA or rock or rap or cartoons as being responsible and maybe- just maybe- there’s something to that. But what about everything else? If violence in media causes violence, surely violence itself should be cited here!

That’s Marine Corps veteran Scott Olsen, moments after he was shot in the head with a gas canister from close range. Part of the brutal crackdown by police on the Occupy Oakland protests last year- back when Mayor Jean Quan decided the best way to deal with a peaceful protest was by turning her town into a war zone.

But why talk about Oakland and countless other cities being turned into war zones when we can just talk about actual war?

As I’ve mentioned in previous posts, this is the single longest war in American history. Year after year after year, it goes on, and with no end in sight. That’s got to be the single largest and publicized campaign advocating violence, yet where is the outrage against it?

And what about hunting? That’s all about guns and the glorification of killing things…

What about Civil War Reenactors? 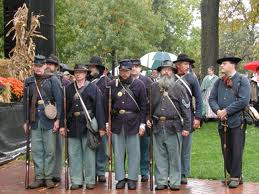 What about the national anthem? That thing is full of references to bombs. What about the 4th of July? A day when we celebrate our victory in a war by setting off explosives! 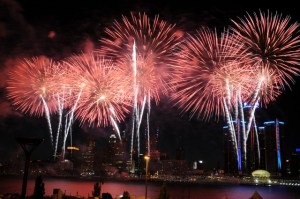 What about the very way we talk about violence? Should the Mob Museum here in Las Vegas be shut down? Should we do away with anything related to pirates? Should we stop teaching about the war of 1812 in schools?

You get the idea. Ours is a culture and history built on violence. It’s in everything–  not just our media. While I’ve got my own views on what does and doesn’t cause or promote violence, my purpose here isn’t to take a side. I’m simply trying to demonstrate that if you do want to try to get into the causes of violence, you don’t get to be selective about who you put on trial.You want to find out if there was something in our world beyond the killer’s diseased mind responsible for death and destruction, you have to look at everything- anything less is just a witch hunt, pure and simple.

Let’s face it, half the time, tragedies like these are the platform from which we get to lynch things we didn’t like to begin with…