Nolan, Jefferson, and The Batman

In the year 1820 Thomas Jefferson shared with a number of his friends a book
he had put together entitled The Life and Morals of Jesus of Nazareth. It was, in essence, the four gospels [Matthew, Mark, Luke, and John] in chronological order. What truly differentiated it from the Bible was the omission of all references to angels, prophecy, references to Jesus divinity and resurrection, and miracles.

In the year 2005 Christopher Nolan’s film Batman Begins made its way into theatres, spawning a trilogy and getting the ball rolling for dozens of “grim and gritty” remakes. In an interview with The Guardian the director said that he “[tried] to do it in a more realistic fashion than anyone had ever tried to [do] a superhero film before.”

The parallel I’m trying to make should be obvious to any Batman fan, either of the comics or the animated series. Having finally seen The Dark Knight Rises this Tuesday and finishing the trilogy, I can finally say this with confidence that Nolan has done to the Batman canon what Jefferson did to the Bible. 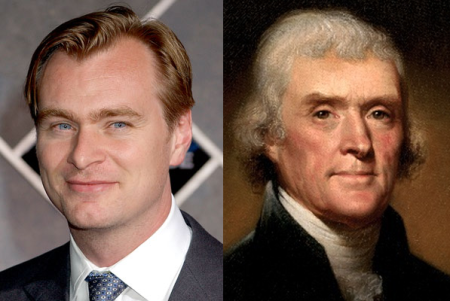 These two men have something against the improbable.

To make things clear, I like Nolan’s Batman movies. He took a concept as seemingly ridiculous as a vigilante crimefighter who dresses up like a bat and somehow grounded it. On top of that he forced us to accept the fact that comic book movies can be more than entertaining, they can be awe-inspiring as well.

An issue that I had with Christopher Nolan and his films was the staunch inability to embrace anything even vaguely fantastical. The problem with that being that the concept is, as I just mentioned, a vigilante crimefighter who dresses up as a bat. With that in mind, maybe the imagination can be stretched just a little more to accommodate a psychopath whose makeup can’t wash off, or a badly scarred man with a deeply split-personality.

Furthermore, by thinning the line between reality [that of the audience] and art [the film being watched] questions are forced to arise. If this is the real world, why didn’t the kidnapping of a Chinese national from his homeland spark an international debacle [The Dark Knight], and <SPOILERS> how is Bruce able to make the jump to escape the prison given the damage in his legs [The Dark Knight Rises]? The films lower our suspension of disbelief, and with our guard down we become quick to ask why.

In his film Captain America fought pseudo-Nazis with energy weapons and tanks as large as houses. The audience never questioned this because although the film had some sort of anchor in a real-life event [World War II], we still understood that this was a world with one foot in the fantastic. If we can believe that a scrawny kid from Brooklyn ingesting a “super solider serum” can help the Allies win the war then we can just as easily believe that Hitler’s “deep science division” is led by a man whose face looks like a red skull.

Taking the “magic” out of the Batman mythos was no easy task, and Nolan threw a lot out when he decided what his approach to the canon would be. Scarecrow’s fear gas got the go-ahead, but not the Joker’s laughing gas, or the Venom that Bane uses to grow stronger. Batman could be called by name, but not Catwoman. Batarangs can be seen, and used, but the Batmobile must be free of any visual associations with the character.

Nolan was free to pick and choose what he wanted, and in many ways simply used Batman and his world to tell the stories that he wanted to tell. This is somewhat lost in the third film due to its connections to actual events in the comics [Knightfall and No Man’s Land, though that’s a post for another time], but for the most part he co-wrote the stories and screenplays for all three films. In another interview he states that “I don’t think our Batman, our Gotham, lends itself to that kind of cross-fertilization,” in response to a question about heroes co-existing between films akin to the Marvel Cinematic Universe.

Having stated that, I must admit that I have to view Christopher Nolan’s trilogy of Batman films as- something else. Something not Batman. Batman would never kill purposefully [letting someone die, Batman Begins], accidentally [tackling Harvey Dent, The Dark Knight], or not react to the deaths of others [all throughout The Dark Knight Rises]. I guess I view them as Batman movies about as much as I view the apocrypha part of the Bible. They can be good, and even beneficial, but ultimately miss the mark somehow.