This week we have an ad courtesy of Chip Randolph, who states that although this show is poking fun those involved hope that it “helps to start an important conversation about industrial agriculture.” Then Buck Marshall and Mick Mitcherson throw tomatoes at him that are rock hard, because “that’s how [they] engineer them.” A pretty funny start to a lacklustre twenty-two minutes.

It is with a heavy heart that I must break the news that Farmed and Dangerous‘s third episode is very easily its worst, and it’s heartbreaking if only because so much is riding on it. With a four episode season this is the installment where things were really supposed to ramp up, I mean, just look at the title. Unfortunately the poop doesn’t quite hit the propeller, or at least not with the gravity you’d expect.

Part of the reason for that is because a lot of screen time is devoted to “the message”. It’s something that I’m overall behind, but I put the quote marks to imply that it really borders on preachy. Sophia visits Chip’s farm, once an industrial one, and we spend a few minutes learning about how they used to run things: “one day they were telling us to cut the tails off pigs, then beaks off chickens, then we forgot we were dealing with living things.” It’s just so heavy. I mean, thankfully it’s broken up by visual gags- 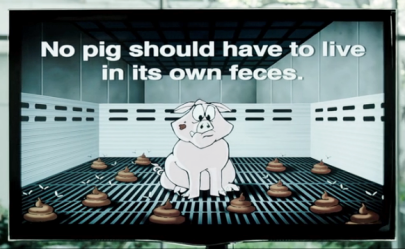 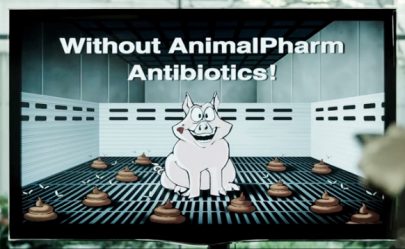 -but it’s just not enough. It’s revealed that a boar, raised its whole life on antibiotics, gored Chip’s dad. The infection was resistant to all forms of medication and that was that, there wasn’t anything they could do. Tonally it’s more muddled than even the last episode, because this time they’re adding a hint of sadness to the comedy and Important Information they were already working with.

As far as the plot as a whole is concerned, Chip receives one of many lawsuits from Joe the Skateboarder. He and Sophia have a great time at the farm, are spied on by the mystery man, the IFIB discusses with a new client, agrees to keep a planned megafarm under wraps, and one of Chip’s co-workers meets with Dr. Van Riefkind as planned in the episode prior. Unfortunately he’s not willing to be put on record and his info that PetroPellets cause tumours is useless, so Sustainable Family Farming Association doesn’t know what to do.

Then Chip gets a text from Sophia that reads: “I want to help, meet me at the megafarm at 9. Bring a camera.” One of the SFFA people think it’s a trap, but he runs over anyway. As it turns out he arrives and, seeing she’s absent calls her at the gates. When he gets her voice mail he waltzes in with a camera, and is promptly arrested.

There are a number of ways this could have been more tense and served as an appropriate “oh no what now” moment that leads into the series finale. The lawsuits are definitely Damocles’ sword for Chip, and an urgency to resolve them could have added to his desire to head to Animoil and dig up some dirt on them. The police showing up isn’t even played off for Sophie’s seeming betrayal, which it definitely should be. He doesn’t even seem upset about her backstabbing him or being in jail, it’s so strange.

I don’t know what next week’s final episode will bring, but this lead-in could have been much better. All that being said, I want to take some time to focus on “the message”.

There’s a lot being said about the problems with antibiotics and resistant bacteria, and that extends over to the  Industrial Food Image Bureau’s newest client. Their business model is plainly stated: “We produce an herbicide to kill weeds. Over time the weeds adapt and become resistant. So we create a stronger herbicide to kill those stronger weeds and so on and so on-” Their struggle with pigweed is also an actual real thing, with a certain strain being unaffected by glyphosate, a common herbicide. Basically what they [and this is real life] did was bombard the plants with even more glyphosate which killed the weak plants and left only the strong. That’s like performing genocide on your enemies and only leaving them with only the healthiest individuals to start anew.

What’s also fun is the pesticide exec’s admission that their product’s active ingredient has been licensed to the military under code name “Agent Banana”. He then says, “Orange you glad I didn’t say orange?” That’s another real thing, folks. The link is from Monsanto’s company website, but the fact that they’re admitting it outright is something to think about.

Lastly, Chip is arrested not solely due to trespassing, which I suppose he was, but due to a breach of the Animal Enterprise Terrorism Act. The cop asked him to Google it, so I did, and wouldn’t you know it, real thing. A frightening real thing. Seriously, people were arrested just for peacefully protesting outside of the homes of professors conducting research involving animal testing.

One response to “Farmed and Dangerous, S1E3 “Raising the Steaks”: A Web Show Review”