If you’ve been reading this feature for some time you’ll know that we typically laud things for being good and then some. Tom Morello is a great musician, sure, but he’s also an activist of the highest caliber. If I Were You is a podcast featuring a very funny internet duo, but it also has them tearing terrible people a new one. Today’s installment is a 60-part story that was created using the video game The Sims 3. 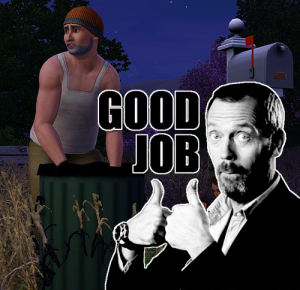 It’s also a highly successful attempt at translating a game’s playthrough into a compelling narrative that discusses the realities of poverty. That may have been a lot to take in, I realize.

Alice and Kev was created by Robin Burkinshaw, a games design student at the time, in mid-2009. He describes the outset of this venture as starting out relatively simply:

“This is an experiment in playing a homeless family in The Sims 3. I created two Sims, moved them in to a place made to look like an abandoned park, removed all of their remaining money, and then attempted to help them survive without taking any of the game’s unrealistically easy cash routes. It was inspired by the old ‘poverty challenge’ idea from players of The Sims 2, but it turned out to be a lot more interesting with The Sims 3′s new living neighborhood features.”

The titular characters are father and daughter, and Burkinshaw was very purposeful when it came to building their personalities. Kev was made to be “mean-spirited, quick to anger, and inappropriate [. . .] also dislikes children, and he’s insane.” He’s essentially described as “the worst Dad in the world.” Conversely, “Alice has a kind heart, but suffers from clumsiness and low self-esteem.” Their creator was very straightforward when he shares that “with those traits, that Dad, and no money, she’s going to have a hard life.”

Now I’m not going to give you a blow by blow of their entire lives, but what you need to know is how surprisingly difficult it becomes to read about them, Alice in particular. It’s not just that she has a father whose behaviour borders on abusive, it’s that she has such high hopes for a better life and the drive it takes to get there.

What I thought really made this deserving of our spotlight was the the 55th installment of this tale. After the usual screenshots and descriptions of what’s going on in the protagonists lives, Burkinshaw shared about how he was invited to be on a radio show called Homeless Truths. He implores his readers to donate to the program, which is itself run by the homeless/ex-homeless/vulnerably housed. While the funds were not able to be raised, starting with the chapter before Burkinshaw begins ending each one with a link to donate to a real-world charity.

In the penultimate post he spotlights Jimmy’s Night Shelter, a charity that is dedicated to housing over two dozen men and women every single night of the year. Jane Heeny, of that same organization, writes the introduction to the site’s charity page:

“Although the world of Kev and Alice is virtual, it nonetheless brings a great insight into just some of the issues facing homeless people – where is it safe to sleep? Where’s my next meal coming from? How can I get clean? These are some of life’s basics that most of us take for granted: Kev and Alice show that not everyone is so fortunate. It’s not just practical issues that are reflected in the story: in Kev and Alice we see how the homeless are often ‘invisible’ – both literally and figuratively; the inconsistencies of caring, denial and hostility shown by strangers; how lack of self-esteem can destroy attempts at moving on; how family ties are often stronger than self-preservation.”

The story ends in October of 2009, almost exactly five months after it began. It’s a heartwrenching, though often funny, tale that has touched many people online, myself included. With only 50 short parts the entire thing can be read in anywhere between half an hour to an hour, and it is entirely worth it.

This may or may not bring tears to your eyes once you have context for it.

I’m giving huge props to Robin Burkinshaw for creating this story, and for calling anyone who reads it to remember the less fortunate. Just having a roof above your head makes you so more blessed than the people you may not even notice on the street.

Do yourself a huge favour and read Alice and Kev from beginning to end. Then, if your find you’re in a good place for it, pick a charity from their page and donate a few dollars. I think you’ll find upon finishing it that you really have no excuse.