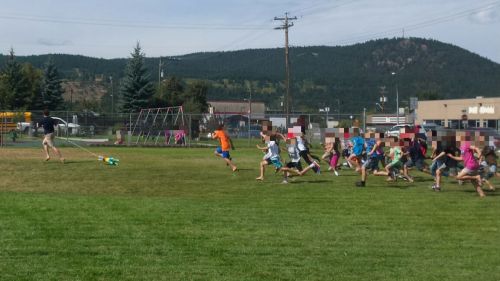 Seeing a mob of children chase my husband made me smile, not just because it was hilarious, but also because they were having so much fun. John is so great with kids, and today he saved my butt. He made a mediocre party into a party they will all remember. I mean, how often do you get to chase a guy around  a field trying to stomp on a piñata?

2) Everything becomes an adventure

It’s easy to allow yourself to become dissatisfied with your life if you always compare yourself to others. I think this is particularly relevant for my generation. We have grown up with social media, where our friends and family display only the best parts of their lives online.

I don’t usually consider myself a jealous person. I’ve never felt like objects are as important as the people in your life. However, I have discovered one thing I covet: life experiences. I may not feel remotely jealous of a friend’s new car or house, but man, do I ever drool over their travel photos, or pictures of them skydiving or scuba diving. I’ve been blessed to have plenty of my own amazing life experiences but somehow I still feel a twinge of jealousy when another friend jets off on a new adventure.

That’s the thing about marriage though. It can make the most mundane experiences into an adventure.

This past year of university was probably my most difficult one so far. I picked up an extra job that I loved and wanted to invest a lot of time into, but I also had to write my honours thesis before the end of the year. During this time John not only picked up so much slack for me (see Section 1), but he also made our breaks together feel like our own tiny adventures. Like that time we were burned out from homework so we ordered pizza and had a Harry Potter marathon. Or those nights we would walk down to the mall just to wander around or buy some sneaky snacks. Even going for a late night run or a dumpster diving date became exciting, because it was something we were doing together.

3) You are forced to become more balanced

Last year around this time I wrote a post about four things I had learned in my first year of marriage. One of the four lessons I had learned was that “disagreement is okay”. Now that it’s (almost) been two years, I would like to revise my statement: disagreement isn’t just okay, it’s great.

I’m not saying that I don’t want to deck John in the face every now and then over a difference of opinion, but having a different perspective than my own has brought a lot of balance to my life.

In what ways, you ask?

Well, for me, being married has completely changed the way I manage my time.

I used to always be late for everything. My high school secretary once wrote “too many times to bother counting” on my late slip in the section titled “number of times student was late this year”. It wasn’t just that I was late though, it was that I thought I could do more than I actually could in a given amount of time.

Before John and I were together I used to fill up my week with plans, often planning multiple events for one evening. Then I’d force myself to find time for homework and downtime somewhere in between. I felt like I needed to regularly meet up with everyone I loved so that I could maintain our closeness. However, many of these meetings were cut short, or else I would show up late, because I had (once again) overbooked myself.

When we first got together, I tried to drag John along with me everywhere I went, but sometimes I just couldn’t make him come along.

After a while, I started to realize that I didn’t actually want to be out every single night either, I often just felt like I ought to. Eventually, I stopped making plans for every single day of the week. It’s been glorious.

Don’t get me wrong, I still go out with friends quite a bit more often than John does, and I still drag him along to his fair share of events. However, being with him made me realize that I needed to book off time for myself.

4) You get to spend every day with your best friend

The Ashley Madison scandal highlights an unfortunate reality about marriage: it is always a risk. Signing up to do life with someone means that you have to weather the (social, physical, intellectual, etc) changes that you will both inevitably go through as you age.

Yet how amazing is it that you get to spend the rest of your life changing and growing with your best friend?

I get that someday things might get boring, or hard, and we might even feel tempted to throw in the towel.

I just can’t ever imagine wanting to give up my best friend.