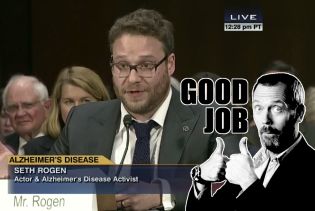 Those make up some of the closing remarks from a man who starred opposite James Franco in a hilarious parody of Kanye West’s “Bound 2” music video. An actor who portrayed a disgruntled barista whose get-rich-quick idea scheme was to create the adult film Swallow My Cockuccino. He’s the one responsible for co-writing a film that starred Jonah Hill being anally violated by a demon [spoilers for This Is The End, my bad].

Seth Rogen is all of those things, but he is also an Alzheimer’s disease activist. END_OF_DOCUMENT_TOKEN_TO_BE_REPLACED

Just a few seconds ago, I saw a picture of a time capsule embedded in the flooring of a mall in Calgary, listed to be unearthed in the year 2999. I had misread the caption at first as 2099, and thought to myself, “Huh- seems like a waste. I’ll still be alive for that.”

The full implication of that just struck me.

END_OF_DOCUMENT_TOKEN_TO_BE_REPLACED

What struck me was what exactly made this summer more heartbreaking than any other. Was it the suicide of Top Gun filmmaker Tony Scott? The passing of puppeteer Jerry Nelson? Moreover, was this summer any more “heartbreaking” than 2009, when Michael Jackson, Farrah Fawcett, Ed McMahon, and Billy Mays died? END_OF_DOCUMENT_TOKEN_TO_BE_REPLACED