Tag Archives: And the Grate Expectations

2 Broke Girls, S4E21 “And the Grate Expectations”: A TV Review 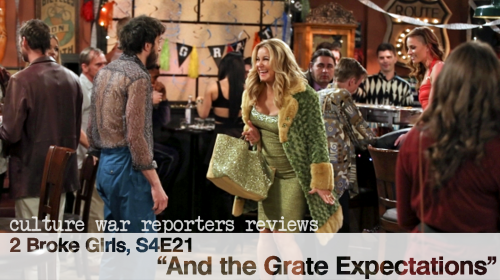 I, Evan Yeong, do solemnly swear that I will keep it together when reviewing this episode. This close to the end of Season 4 and it only makes sense that I remain cool, calm, and collected as I chronicle how 2 Broke Girls concludes its fourth year and prepares for its fifth. In retrospect, given how things have gone as of late, I was kind of a fool for not instituting the EVAN YEONG MADNESS WATCH I considered back in my first ever review of the show.

This week’s episode is the first in over a month without Nashit, a poor character portrayed by a very stand-up dude named Austin Falk. His tenure as Max’s love interest lasted all of five weeks, which doesn’t quite match up with reigning champion Deke [Eric Andre] who holds the title at eight episodes. Let’s all pour out a bit of our beverage of choice for poor Sebastian who was with us but for a single installment of the show. And no, I haven’t forgotten about Johnny, but he’s from a time before I was officially reviewing 2 Broke Girls when it was somehow worse than it is now-

-and before you remind me of the first line of this entire review you need to hold on just a sec, because this episode was actually pretty good! There were some terrible “jokes” as per usual but also some very funny ones! I’m actually in a good mood because of it! END_OF_DOCUMENT_TOKEN_TO_BE_REPLACED