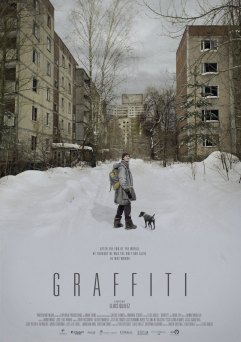 Seven years after an unnamed apocalypse, lone survivor Edgar (along with his beloved puppy, K.O) wander a urban wasteland. Edgar spends his days scouring local buildings for supplies and marking contaminated zones with spray paint warnings and signals for help.

From the first frame the audience is taken on a brutal journey of brutal isolation as we follow Edgar (Orial Pla) through the cold and decaying cityscape, both depressing and still strangely beautiful. And that, right there, is perhaps the greatest charm of the film.

Director Lluís Quílez does a masterful job at creating a stark, bitter, but still utterly believable world. Quílez captures not only the grand sense of loss but the simple, even monotonous existence of his protagonist. Throughout I was constantly reminded of the feel of first half of I Am Legend (in the best possible way). Special kudos to Quílez for his research, as Edgar’s own warning symbols bear an uncomfortable resemblance to the FEMA marking system used during actual disasters.

A fantastic job is done of showing the mundane, day-to-day “chores” of living in a post-apocalyptic wasteland. Which is something I’ve ironically always found to be one of the most interesting parts of the genre, but I’m weird like that.

Seriously- just look at this…

END_OF_DOCUMENT_TOKEN_TO_BE_REPLACED

Frozen: The Power of a Pretty Dress

I’ve been reading a lot about Frozen lately, and not even intentionally. I mean I watched it intentionally, but it was when I was having a slumber party with my niece. Okay, fine. You caught me. My niece is now a teenager and we were watching it in spite of not being the age demographic they were aiming for. Seriously though guys, why are Disney movies so appealing? There are so many things I can hate on in this movie. Like how it features ANOTHER typical white, skinny heroine whose eyes are bigger than her wrists.

Okay fine, I see you Jasmine… and Mulan.. and Pocahontas… and Tiana, but they’re still all skinny!

Or how the head of Frozen‘s animation shared about how difficult it is to animate female characters because you have to keep them pretty all the time.

Man that is tricky. I mean, they’re just all such unique characters.