For Your Consideration: The Happiness and Wellbeing of Minority Characters

This is short [and quite late] even as “For Your Consideration” posts go. While past instances have been particularly research heavy, this installment really leans into the gist of those three words. I’m here to present all of you nice people with a little something to ruminate on, and this time I don’t even have a particular stance on it myself.

Jeremy Whitley is a comic book writer that Marvel appears to be actively grooming, and who I first read due to his penning one of a handful of short stories in the Secret Wars: Secret Love one-shot [a truly excellent Danny/Misty Knight romance].

Since then he’s also written a tie-in issue of Champions, and is currently on the ongoing The Unstoppable Wasp as well as responsible for another upcoming event one-shot [this time for the summer’s Secret Empire]. Suffice to say, Whitley is swiftly making a name for himself at one of the two largest publishers in the industry. 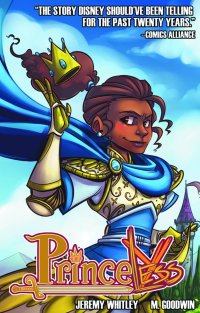 What he was once primarily known for, and which I’m positive he’s very proud of, is Princeless. Starting back in 2012, the all-ages series has released six volumes and been nominated for two Eisner awards. What’s particularly notable is how he has in part been writing the book for his daughter, with the following interview answer explaining a lot about the title hero’s character design:

“My daughter is black and while I encourage her to look for role models of all colors, girls need to be able to see girls that are like themselves in media. They need it even more when it comes to seeing them portrayed with strength. And, unfortunately, I think that’s sort of a symptom of this exclusionary tendency in the self-professed nerd culture circles. I would love nothing more than to change that culture, but barring that, I’ll help create another one.”

With that in mind it should be of no surprise whatsoever that Whitley is very concerned about diversity and representation in media, and has made a concerted effort to include that in all of his books.

Now to get to the actual meat of this post, I began following him on tumblr not too long ago where he’s very active in engaging with his fans. It was a couple of weeks back that I came across the following exchange between Whitley and two such comic readers:

END_OF_DOCUMENT_TOKEN_TO_BE_REPLACED

Seven years after an unnamed apocalypse, lone survivor Edgar (along with his beloved puppy, K.O) wander a urban wasteland. Edgar spends his days scouring local buildings for supplies and marking contaminated zones with spray paint warnings and signals for help.

From the first frame the audience is taken on a brutal journey of brutal isolation as we follow Edgar (Orial Pla) through the cold and decaying cityscape, both depressing and still strangely beautiful. And that, right there, is perhaps the greatest charm of the film.

Director Lluís Quílez does a masterful job at creating a stark, bitter, but still utterly believable world. Quílez captures not only the grand sense of loss but the simple, even monotonous existence of his protagonist. Throughout I was constantly reminded of the feel of first half of I Am Legend (in the best possible way). Special kudos to Quílez for his research, as Edgar’s own warning symbols bear an uncomfortable resemblance to the FEMA marking system used during actual disasters.

A fantastic job is done of showing the mundane, day-to-day “chores” of living in a post-apocalyptic wasteland. Which is something I’ve ironically always found to be one of the most interesting parts of the genre, but I’m weird like that.

Seriously- just look at this…

END_OF_DOCUMENT_TOKEN_TO_BE_REPLACED

“I killed my Facebook page years ago because time clicking around is just dead time. Your brain isn’t resting and it isn’t doing. I think people have to get their heads around this thing. All this unmitigated input is hurting folks.” – Louis C.K.

I had been a loyal and active member since 2006. I had posted thousands of photos, generated twice as many likes, had a business page for my photography, and met many, many incredible people from all over the place, some of whom I had never met in person until they let me crash on their couch when I visited their city. It seems a bit odd, considering all those connections, benefits, and likes, that I would just go ahead and make such a major decision like that.

Facebook, when it started, was great. It was a simple news feed layout with status updates and the ability to upload and share photos — nothing more. Maybe there was a section where you could show us your favourite shows, music, and sports, but that was about it. It was fun, innocent, and a great way to keep in touch with old friends and family. Over the course of time Facebook began evolving, as most sites do — they began adding features like additional timeline content and games. Harmless stuff, other than those damn invites to join Farmville (I still hate you Farmville and I hope you burn in social media hell!). Even at that point, it was still a place to see what people were up to. Eventually I started spending too much time endlessly browsing my news feed and becoming more and more bothered about what I was reading. It was a sensory overload of everything you could imagine. People were fighting over nothing. Trolls were out spreading incredibly hurtful comments. People were using their high friend count as a way to push their opinions on others. I was seeing some very negative content coming from people who I had thought were genuinely kind. It was coming from all directions and it was too much to take. I tried the Facebook friend cleanse and deleted well into the hundreds. That seemed fine, but eventually I started blocking others who posted annoying posts/shares — I didn’t want to delete them, because well, a few of them were family, but their posts bothered me. It got to the point where logging in just wasn’t fun anymore, so I decided to pull the plug. END_OF_DOCUMENT_TOKEN_TO_BE_REPLACED

END_OF_DOCUMENT_TOKEN_TO_BE_REPLACED

“Spectacle” is the term for it. How much is it integral to movies and the movie-going experience? Do we really lose anything by watching a movie on our TVs rather than in front of the big screen? END_OF_DOCUMENT_TOKEN_TO_BE_REPLACED

I say with complete honesty that I there are times that I feel genuine pity for those of you who don’t live in Toronto. I mean, sure, there’s the fact that it’s one of the most diverse cities in the world, is home of the 3rd highest tower in the world [underneath which is brewed some pretty decent beer], and  is the setting for pretty much the entirety of the Scott Pilgrim series-

You can click the image above to check out a whole bunch more.

No, the reason for that, dear readers, is The Grid. A weekly publication, this newspaper describes itself on its website as:

…a weekly city magazine and daily website providing a fresh, accessible voice for Toronto. Our goal is to capture the vibe and energy of a city in ascendance, largely by rejecting the glossy, doggedly aspirational vision of it you see in so many other publications. END_OF_DOCUMENT_TOKEN_TO_BE_REPLACED

I and TV often find ourselves at odds. More often than not, what you get on television is hours upon hours of sensationalist news, vile game shows, and talk shows that swing between glorified bum-fights and thinly veiled infomercials. Sure, every once in a while you can find quality along the lines of Arrested Development or Ugly Americans or Scrubs or whatever wildly popular and inventive new show that NBC will cancel because **** you, but for the most part there are plenty more weeds out there than roses.

However, one such exception to the norm is- believe it or not- Court TV.

Now you might be trying to wrap your heads around why on earth these shows are any good, but that’s probably because of the general skepticism you have about daytime TV (and not without just cause). Think about it. Really think about it. What do we see on this show? Glamorization? Perhaps, but for all the strange cases that show up, the majority of them seem nevertheless perfectly plausible. And that brings us to the second point: sympathy. Who among us can say we haven’t had a situation, or haven’t known someone who had a situation, which would constitute a conflict without going so far as to be criminal? Who hasn’t had some petty yet long-running dispute with a neighbor? Who hasn’t had some tiff about splitting up a dead relative’s possessions? Again, Court TV has it all, and what’s more, shows the real-life consequences of all this (usual) pettiness and greed. We actually get to see some positive arbitration, and get educated on not only our explicit laws, but our social contract, our culture, and our state as human beings in general. However hyped up it might be played, the “hollywoodization” of the shows still can’t rob them of their core essence, which is genuinely interesting and relatable conflicts and the ways we resolve ’em.

I’m not saying you don’t have better things you could be doing with your time, but if you’re gonna be watching TV, there’s plenty worse to watch than this.

And just one last note. I understand that “Court TV” also used to be the title of the TV channel now called “TruTV”. Obviously what I’m talking about and that are two unrelated things. Just a heads up.