Early this week I was perusing Marvel’s solicitations for May 2013, and came across the following cover for Avengers #11: 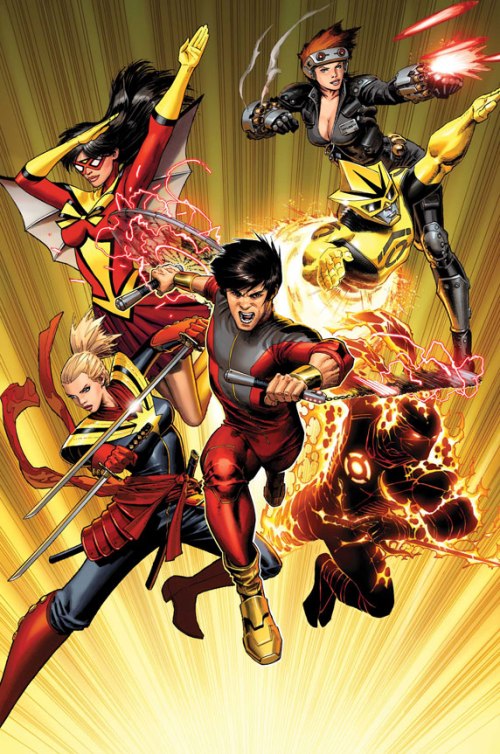 The first part of the issue’s description [and the one I thought was most relevant] was the following:

As Shang-Chi battles an ancient enemy, the Avengers hang out in Hong Kong’s swankiest casino.

I was initially very confused, since from what I could tell the outfits the Avengers are wearing appear to be very heavily influenced by Japanese culture and they’re supposed to be visiting Hong Kong. Adi Tantimedh on Bleeding Cool [when you choose to write on a topic three days after you think of it don’t be upset when another website beats you to it] helps fill in what each hero’s outfit is in reference to. From top left, going counter-clockwise:

Armed with [most] of the above information, I took to the subreddit r/comics a few days ago to ask my fellow comic enthusiasts what they thought. One of the first commenters [and one I respect highly within the community] ran to the cover’s defence, saying that covers rarely reflect the interior of the book. Soon after that, however, we began to discuss the representation of Hong Kong by Japanese imagery, and whether or not this was valid and right.

Click here to open up a link to the entire thread and the image above to open it up larger in a separate tab.

Eventually what his argument boiled down to was “what else could they do?” coupled with the unfortunate “I can’t tell the difference.” The latter was in reference to the streets of Hong Kong being indistinguishable to him and others from the streets of another large Asian city, such as Tokyo. The issue is that whenever this argument is used someone can always tell the difference. I know the difference between Chinese, Korean, and Japanese writing, and many others can too. Furthermore, his assertion that Hong Kong has no distinctive landmarks was refuted by another redditor, who brings up the fact that its “unique and exciting skyline” was used to great effect in The Dark Knight.

You can also click this one to open it up in a new window as a larger image.

For the most part [and this was a unique experience for me on reddit] people backed up my conclusion that this was fairly racist. Japanese culture and imagery are widely recognized around the world [and America, in particular], but does this mean that it should be used to depict any Asian country? A friend of mine likened this to the Avengers visiting Canada and having them appear as cowboys or rednecks because North America is [as we all know] all pretty much the same.

Bleeding Cool [I am still bitter, but they conducted research I couldn’t have] revealed that Dustin Weaver, the cover artist, is “a massive Japanophile,” which would explain the imagery used. My problem isn’t simply that it throws Japan at you expecting it to communicate China, but that it’s the lazy way out. Going with the thought that “this what people know so let’s give them what’s most easily digestible.” It’s incredibly disappointing.

That disappointment is exacerbated by the fact that this is a great comic. It’s written by Jonathan Hickman, one of the most masterful of Marvel’s scribes, and he has been using his time with the Avengers to build a far-reaching epic narrative. Not only that, but he made Shang-Chi an Avenger. Shang-Chi. He’s awesome.

Besides being awesome, Shang-Chi is also a master of kung-fu.

When this comic comes out [in trade paperback form, so I’ll be waiting until July] I will be buying it, and I can almost guarantee that I’ll enjoy it immensely. This situation sucks in that it’s attached to a fantastic title, and the only positive thing I can take away from it is that the writer [Hickman] and interior artist [Deodato] rarely have anything to do with the cover, and I am positive that that’s the case here.

I’m also very pleased that I’m not the only one who’s come to these conclusions, and it’s my hope that the higher-ups at Marvel [or really, whoever is responsible for signing off on this] picks up on the reactions to this cover and thinks more deeply about their decisions next time. Depending on how it’s viewed it can be taken as extremely racially and culturally insensitive.

I end this with an excerpt from comic book website The Outhouse, who noticed the same thing I did and addressed it with a solid dose of humour:

I guess this does open up the possibility that the cover shows Shang-Chi running away from all of his embarassing white (and Brazilian) friends before they embarass him with their stunning lack of knowledge about Chinese culture.