Newer readers may not know this, but this is actually the third post about World War Z on this blog. I first wrote about the way the film was to deviate from the book back in 2011, while former CWR writer [who I dearly miss] Elisa briefly explored their prevalence in pop culture the year after.

So two days ago I saw the movie, and I’m not going to write the logical continuation of my first post, complaining about how the movie could have been “so much better if only. . .”

What I’m going to write about how I wasn’t in the movie.

I drew this over two years ago for an all-comics weekly publication I used to run.

And no, I don’t mean why wasn’t there a zombified version of me in the movie, because seriously if you guys didn’t know I am deathly terrified of any sort of biting reanimated corpse. What I mean is why, when I watched this movie, weren’t there any dang Asians.

To catch you up really, really quickly on the differences between the book and the movie:

The first person interviewed in the book is Kwang Jingshu, an elderly Chinese doctor. Other Asians include a South Korean intelligence agent, a Japanese otaku, and an Indian lance corporal.  That’s in addition to characters from Palestine, France, and South Africa, adding a great deal of colour and diversity to the book. All of these characters tell their story; they are fleshed out, living, breathing people. 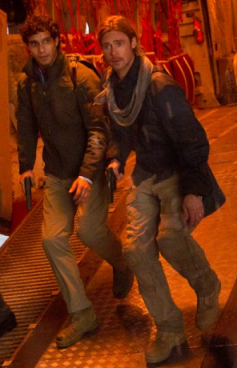 He may look pretty spry and well-armed here, but I assure you that he is not long for this life.

By my count, and believe me, I was paying close attention, there are really only two Asians in the film. Elyes Gabel plays Dr. Fassbach, an [what I assumed to be] Indian virologist with a British accent who trips and shoots himself soon after being introduced and spouting some wisdom on mother nature and disease. Song Xuan Ke plays a character only known as “Korean Doctor,” shown in a flashback. Of the two I would only consider the former to be a speaking role, since the latter whispers something in Korean before being bitten on the ear and, presumably, dying.

And really, that’s it.

Like I said, I was looking pretty hard, and I didn’t even see any Asian characters in the large scale scene of general pandemonium in Philadelphia that had hundreds of extras milling around. Nor did I see any on the floating military HQ that Pitt’s character and his family stay at. Here’s the kicker, though, what really, really gets me-

Brad Pitt flies to South Korea with Dr. Fassbach to find “patient zero.” They land on a rainy night, on a US military base, where they do not lay eyes on a single Korean. The flashback with “Korean Doctor” has him near a bound Korean young man, the one who ends up biting him, but I just can’t really count him because he starts out dead. Oh, and all of the soldiers on the base are white.

Look, I didn’t expect to be wowed by this movie. I didn’t expect a well-documented series of interviews which covered the horrors of the Zombie War before giving way to the hope of a life where we can, and do, win. I likewise didn’t expect a lot of globetrotting, and was surprised the film hit three countries as it was [South Korea, Israel, Wales].

What I did expect was a little more attention given to the largest continent on the planet. The closest thing we would’ve gotten, given the original third act footage of the film, was a large battle scene in Russia. Let’s be fair, you guys- Russia is geographically Asian, but it is by most standards fairly culturally European. Even if you want to disagree with that, they’re at least aesthetically European.

Why couldn’t Brad Pitt’s Plan B Entertainment work out rights to film in Asia? I mean, Iron Man 3 had a Chinese edition specifically made to tap into that box office; they made almost $100 million in two weeks. Honestly, it makes almost no sense to me from a purely business-minded standpoint.

I mean, let me just mention very shortly that the film is not a great one, but I really do think it could have been improved by emphasizing the “world” in World War Z. The book aside that’s what’s really missing. Don’t get me wrong, I think it’s great that we get to hang out in Jerusalem for a bit of the film, but don’t  tell me we’re going to South Korea and give me a dark, rainy airstrip. Don’t tell me that we’re in South Korea and show me a bunch of white American soldiers.

Honestly, I don’t think I’m asking too much to ask for a speaking role, however small, in a movie called World War Z. I definitely don’t think it’s too much to expect to see an honest-to-goodness Asian in South Korea.