I like a lot of things, guys and girls. I like comic books, as the title of this post attests to, but I also like Marvel, and movies, and mythology. Taking all of that into consideration there is absolutely no reason why I shouldn’t have liked the sequel to 2011’s Thor. I mean, that film took The Warriors Three, consisting of Hogun the Grim, Fandral the Dashing, and Volstagg the Voluminous [i.e. fat], and cast the Japanese actor Tadanobu Asano as the former.

I should hope that you know my feelings about racially diverse casting by now, but really the expressions below sum them up pretty nicely.

From left to right: Hogun, Fandral, and Volstagg.

So there I was, sitting in the movie theatre excited to see The Warriors Three mix it up with some bad dudes, and I was rewarded almost immediately. There they were, thrashing generic-looking fantasy enemies in impressive fashion. This was the best; I was enjoying myself.

I didn’t post SPOILERS above because this is incredibly minor, but be warned, I guess. After Thor et al. clear the realm of all evil our titular hero turns to Hogun and tells him that he should stay with his people [in the Marvel Cinematic Universe he apparently hails from Vanaheim, which does not line up with the comic books]. Hogun gratefully accepts his offer.

This bothered me. I was willing to give this film the benefit of a doubt, though, because certainly they wouldn’t just leave this character out of the entire rest of the movie, right?

They wouldn’t feature The Warriors Three in a big action scene at the beginning and not reunite the gang later on, right?

There’s no way they would bring in Asano just to film what’s essentially a single scene, right?

“You guys aren’t going to just sideline me in the sequel, right guys? Guys?” [Source: kibbitzer.deviantart.com]

Hogun does not return except for a brief second [it really is that short] near the very end of the film.

In retrospect, perhaps I should have paid more attention to the promotional materials they were releasing. What follows are all of the Dark World posters dedicated to secondary characters [basically omitting Thor, Jane, and Loki]:

So up top we’ve got Fandral and Volstagg, both members of The Warriors Three, as mentioned. Below we have Lady Sif on the left, an unofficial member of the group, if you will, and next to her Heimdall, who had a slightly larger role this film. We all know who’s missing, so I’m not even going to spell it out for you. What I am going to do, however, is present a snippet of an interview where director Alan Taylor explains why Hogun got the short end of the stick:

Can you explain why Hogun was written out of the film so quickly? Was the actor just not available for the whole shoot?

No, isn’t that funny? That was something that we thought of and then, not sure if it was the right thing to do but I’ll tell you the intention behind it. In Thor 1 the Warriors Three – they are called “The Warrior Three” in the comics, but it’s almost The Warriors Four because Sif is kind of an honorary member – Thor’s always had the group as a sort of chorus, and I think part of trying to delve more into Asgard was trying to give these characters moments where they could shine on their own a bit more.

Again, it was quite reduced in the final film, but we saw Volstagg briefly in the pub. In the original we saw his family, we saw his kids, we saw where he comes from. It was all by way of a long, laborious build-up to the idea that we thought it would be cool to go to the home world of one of our characters.

So that became Hogun. So rather than having all of our Warriors Three present all the time, we thought we would give each of them a singular moment. So we saw Hogun fight, defend his world, and being sort of… It was not a scheduling thing, as it may feel like, as though we had to get him out of the movie. It was more we felt it was important to have Thor say something like “Stay here where your heart is, Asgard can wait. Asgard doesn’t need you. You need to be where your heart is.” Because that’s a theme in the film.

Look, I get that Fandral is supposed to be sort of this fun swashbuckling Errol Flynn-inspired hero, Volstagg is big and has an axe, people [not the racists]
really liked Heimdall, and Sif is a bad-ass good-looking lady fighter. I get that, I really do, but why is it the actor of colour whose “time to shine on [his] own” literally consisted of him being on his own? 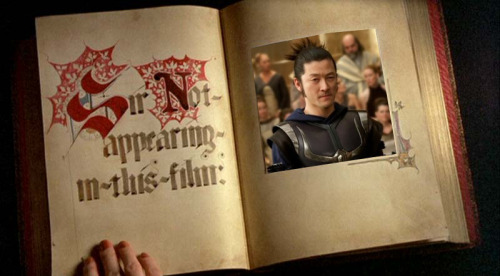 Could it maybe have to do with the fact that out of all the secondary characters mentioned Hogun is easily the least marketable?

Ultimately Alan Taylor’s answer is a disappointing one, and doesn’t really explain why it was Hogun in particular who was singled out and separated. If anything, as some have mentioned, they character they should’ve benched is Fandral seeing as it could have made the casting shift from Josh Dallas to Zachary Levi a little less jarring.

As it stands, this was my number one biggest problem with the film, and one that I can’t find any satisfying justification for. I entered the theatre expecting to get a healthy dose of fantasy superheroics, with the added bonus of one of the characters involved looking, well, like me. My first expectation was met, but the abruptness with which the second was denied made it hard for me not to judge the entire film by its exclusion.