I really like watching TV, you guys [and girls]. To be more specific, sitcoms in particular are my absolute jam. Their format is one that garners fanbases as rabid as Breaking Bad [okay, maybe not that intense], and just because a piece of art’s main purpose is to make us laugh doesn’t mean that it can’t have just as much of an impact as more humorless fare.

In all seriousness, though, I’m going to be writing about racial representation and how New Girl and Brooklyn Nine-Nine, two of my favourite sitcoms, are doing great things in that regard.

From top to bottom: Wayans, Morris, Braugher, and Crews.

What got me thinking about all of this was a post on the AV Club titled “Fox is changing the landscape for black men on TV“. The article specifically outlines how the network has “managed to quietly introduce some of the most well-rounded roles for black men in the last decade,” with many of them stepping outside of commonly established racial stereotypes.

In terms of New Girl the show brought back Damon Wayans, introduced in its pilot episode but absent due to other television commitments, as his character Coach. He joined his “replacement” Winston, played by Lamorne Morris, as another Black cast member and will actually be sticking around for the rest of Season 3. Over on Brooklyn Nine-Nine are “two well-rounded black characters . . . the buttoned-up, openly gay precinct captain, played by Andre Braugher, and the histrionic, gun-shy father, played by Terry Crews.”

And let me tell you, that’s just great. You know what’s even greater, though? That the diversity doesn’t stop there.

Way back in 2012 I wrote a three-part series comparing New Girl and 2 Broke Girls, the show I currently review on the weekly, and was actually surprised when I re-read the third installment. It concerned how both sitcoms handled race, and I had completely forgotten about how in the pilot episode the guy who stands up Jess is Asian. Not only that, but in the third episode of Season 1 the gang goes to a wedding, and it is an interracial one. Yes, everyone, interracial relationships and weddings happen and they are a perfectly normal thing- 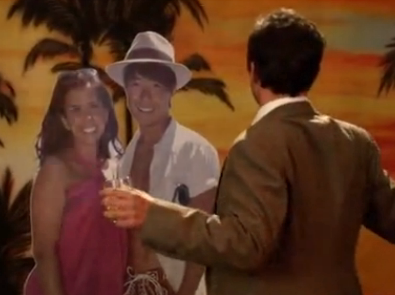 Look at Nick not making a big deal out of it.

That’s all in addition to the fact that the titular character’s best friend Cece is played by the multiracial Hannah Simone, which means that this current season is actually split down the middle between White and non-White. That is absolutely nothing to scoff at. She’s also all sorts of easy on the eyes, which can only ever be a bonus, I think.

But I think it’s time to head over to the 99th Precinct of the New York City Police Department nowabouts. While Braugher and Crews were already mentioned above [and the former is a comedic powerhouse in his own right], it took talking to a friend about the 2013 sitcom to make me realize how its balance may actually tip moreso than New Girl‘s.

Of the seven cast members billed during the opening credits, only three of them, Andy Samberg, Joe Lo Truglio, and Chelsea Peretti are what the average person would call White. Joining the aforementioned two Black men are Stephanie Beatriz [credited second!] and Melissa Fumero.

Beatriz plays Detective Rosa Diaz and her parents are, according to Wikipedia, a German-Dutch Colombian American and a Basque-Spanish Bolivian American. Fumero is Detective Amy Santiago, and is adorable. She is also of Cuban descent. Two Latina actresses joining two Black actors on a sitcom that is specifically targeting neither demographic.

That’s two shows, people. Two shows where non-White cast members actually outnumber White cast members. That is an enormous deal; that is something that is worth applauding. Honestly, that can only be buoyed by the fact that both shows are the funniest thing this side of the Mason-Dixon line. Also on the other side of that line. They’re so funny that they exceed the bounds of Civil War dividing lines, and I look forward to their Tuesday night comedic goodness every single week.

I highly recommend you watch them, but also that you recognize a good thing when you see one. FOX may not have the best track record when it comes to delivering the new, but they can put out a quality sitcom, I will tell you that. These are shows that are more accurately representing the world we live in, and that’s worth some small amount of fame. Oh, and congrats to Brooklyn Nine-Nine for the Golden Globe; I’m going to pretend that award was for Best Comedy Series and for the stellar job you’ve been doing with diversity. New Girl, I’m going to pretend the same thing about your Golden Globes.