Girls: 2 Broke and One New – A Retrospective, A Eulogy, and An Announcement

Way back in early 2012 I posted a three-part series about two sitcoms that had premiered the previous fall. Covering 2 Broke Girls‘ and New Girl‘s respective casts, styles of humour, and approaches to race, these posts exist as a window into their first seasons as well as an unfortunate snapshot of some embarrassingly unrefined writing from yours truly [with some unrefined opinions as well, as my perspective on Morgan Freeman and Black History Month has certainly shifted since then].

All credit where it’s due, both have come a long way since their inceptions, and in generally positive ways. While not shying away from their trademark “classy-dirty” style of comedy, 2 Broke Girls eased off of the racist humour and began giving their secondary cast members more screen time and character development. New Girl had Hannah Simon’s Cece join the primary cast, with Damon Wayans Jr. even returning for a lengthy stint after his departure following the pilot. I feel fairly confident in saying that neither show every truly dipped in quality, which is saying a lot for the medium and genre they share. I would even go so far as to say that both managed to improve with each passing season.

Now, in 2017, there were a few weeks where the fate of these two sitcoms was in question. To address them consecutively…

After months of reviews in which I mused on the future of the show I finally penned a post in April asking “Is 2 Broke Girls Cancelled?”. It has since garnered more comments than anything else on this blog. In it I catalogued what the creators and industry insiders had to say about its future, as well as my personal opinion as someone who has reviewed 101 episodes of the show. I felt like, as someone who stuck with 2 Broke Girls longer than the contributors to its very own wiki even did I was allowed some say.

It was Deadline that pulled back the curtain on the fact that CBS was airing a sitcom that was produced for Warner Bros. That same outlet also broke the news that the network had axed 2 Broke Girls. CBS scheduling director Kelly Kahl is quoted as saying that, as far as she knows:

“it was a creative decision more than anything else. It was not a show we own but we picked up (new comedy series Me, Myself & I and By The Book) from Warner Bros. So I don’t think it was a business decision, I think it was creatively we felt it was time.”

It’s noted that the show made Warner Bros. a very significant amount of money per episode. In spite of being a key players in their weekday lineup, CBS appears to be searching for something else they can wholly own, distribute, and profit from. Kahl even says in the same breath as “was not a show [they owned]” that it was “a creative decision”, but as with all art it comes down to profits.

In an interview with The Daily Beast way back in March Jake Johnson, who plays Nick, admitted that, as far as he knew, “I think after this season it’s done.” The outlet very reasonably took this to be a good sign that the sitcom was coming to a permanent end, titling their article “Jake Johnson: ‘New Girl’ Almost Definitely Ending After Season 6”.

Then, just one day shy of Fox announcing their 2017-2018 schedule, it was announced that New Girl would be receiving a final shortened season. It was Johnson, who again introduced the idea that things were likely wrapping up, who ended up confirming the remaining number of episodes left on Twitter:

#NewGirl has been picked up for 8 final episodes! Very excited to be able to finish what we started. Also Happy Mother's Day, ladies.

Deadline also points out that throughout its entire run New Girl was the network’s highest rated comedy, which certainly helps position it against 2 Broke Girls, which had The Big Bang Theory to contend with. As far as further reasons for its renewal, there was the mention that the show is “a legacy series for Fox”, and as a result “will be getting a proper sendoff”.

Given that both shows were seemingly on the chopping block and only one made it out alive, I looked to see what the reactions were to 2 Broke Girls‘ cancellation.

Who Cares? The Stars, For One

I’ve never hidden my deep appreciation for Beth Behrs, who plays Caroline, and her knack for physical comedy. More often than not she was the bright spot that could save an episode for me. While it’s currently unknown what she has lined up, my hope is that she eventually finds her way back to TV but on a much better show. Her response was seemingly optimistic:

Kat Dennings’ was, well, appropriate to her character Max. Enjoy, if you can, her rendition of Semisonic’s most popular tune:

Behrs had more to say, tweeting a message from both her and Dennings to their fans, a hugging gif to her co-star, and lastly, and hilariously, stated that she [and others] would miss the horse the most:

Goodbye Chesnut. Thank you for being the catalyst for my love affair with all things horses. We'll miss you the most. pic.twitter.com/zD2FPbLhXv

Who Cares? The Critics, Apparently

Perusing the internet it wasn’t difficult to find fans mourning the loss of a favourite sitcom, and presumably many of them are the very same people who commented on that post I wrote regarding its possible cancellation. That said, there were also a few voices who definitely don’t hold themselves among that number, yet still had something to say.

Over at The Boston Globe Matthew Gilbert requests that readers “send [their] prayers [his] way” in an article that wonders “What will this critic use as a punching bag if ‘2 Broke Girls’ is canceled?” He asks a few more things in the following block quote that accurately sums up his take:

“Now what bad comedy can I kick around with abandon and name as a handy symbol of the worst of network TV comedy? What title can I use to signify all the many qualities of a thoroughly banal show without having to detail them each time? A critic needs a punching bag, you know.”

Emily Yahr of The Washington Post also wrote an article with a question in its title, this one about its actual content. For those who might be unfamiliar with the comedy she provides the context and setting for the vast majority of 2 Broke Girls‘ raunchy jokes, allowing her readers to come to their own conclusions [i.e. it takes place in a diner, yes, a diner]. While Yahr never outright states her opinion it’s fairly easy to determine it by reading between the lines.

-as I thought it would be appropriate to provide my own personal opinion on last month’s announcements on these two shows.

To start with, regarding 2 Broke Girls, I largely echo Gilbert and Yahr’s sentiments. The number of episodes I reviewed just barely broke into three digits, and I began watching with the pilot. Not only does its cancellation mark the end of a pretty crappy show, it also indicates an end to a job of sorts.

Those who have been following my reviews since the beginning will remember that I took on this assignment once The A.V. Club dropped their coverage, more than eager to fill the gap that had just been vacated. As the four years passed I found myself wondering each spring if I would need to pick things back up after the summer, which up until now had always been followed by disappointment.

In the end I’ll admit to appreciating how 2 Broke Girls made me a better writer over the course of its running. I will always appreciate the moments, few and far 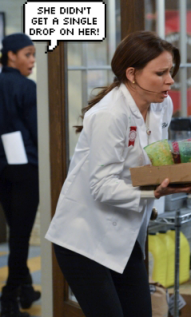 between, when I was able to photoshop a little something together for my reviews. I want to remind readers that this show featured Sam Hart’s “Mario Kart Love Song” in one episode, and honestly how incredibly cool is that? And, lest we forget, there were the many features over the years. Searching each and every episode for the same Maxoline fodder the shippers were, keeping tally of how the showrunners leveraged the sex appeal of its stars so that I could make note of it in the “2 Broke Girls Cheesecake Menu”. It’s been a ride, and much of it has been incredibly bumpy, but overall I don’t regret the experience.

As a peek behind the curtain, and a final point, let it be known that 2 Broke Girls reviews have for quite some time taken up the lion’s share of hits on this site.

Contrast all of that with how I felt after watching Season 6 of New Girl come to a close. There was such an air of finality to it that even before reading any of what Johnson had to say I was certain that things were over. As that realization sank in I came painfully close to having an anxiety attack, which I avoid outright stating if only to be respectful of those who have for a fact had to weather them in their own lives. I truly felt that there would be no more New Girl, and actively struggled with a sense of profound loss.

After calming down and dwelling on it I realized that New Girl was and is the last show I began watching with friends during college, which was a pretty great time. I’ve long connected screen media with specific places and people, and thinking that I was seeing it go was hard. When talking about this show on this blog it’s more often than not been about its approach to diverse casting, but it’s also a painfully funny sitcom that has always treated its characters and their relationships with love and respect. I had an emotional reaction to both pieces of news, but an objectively stronger one for the latter.

Which unearths a topic we’ve covered here time and time again, about art, the artist, and the consumer. How engaging with entertainment is a tricky and often problematic and ultimately complex task that we all undertake on a daily basis. To put it another way, it’s a conversation that lies at the heart of Culture War Reporters.

Those who continue to tune in week after week may have been wondering about what’s happening to this blog, and the truth that I’ve neglected to share is how little time I’ve personally had available to devote to it in recent months. At this point there are still a handful of posts I want to get to, and have already decided that CWR will always remain up with the url you’re all so familiar with, but it’s been a long six years. Hopefully before the month is up I’ll have more concrete answers for those of you who want and need them, but until then thanks once again for tuning in.