I tried Grammarly’s check grammar free of charge because, well, let’s just say that I’ve been skeptical of any sort of program that claims to be able to assist or improve writing. Sure, I write a fair amount as you’ve probably noticed, but I edit quite a bit as well [every post that goes up on this blog, for one, so any mistakes you may find are unfortunately all on me]. Suspicion of any product that may eliminate the line of work I’d like to be in is warranted, I think.

Not only that, but back when I was still working as a copywriter I was asked to try out some software that would be used to “spin” articles, turning old content into fresh, new content that would draw search engine attention to our company. Unfortunately the program [the ironically named The Best Spinner] only served as a sort of glorified thesaurus, providing alternatives to words used, something that any accomplished writer could handle themselves, while rearranging sentences as well.

So I tried out Grammarly with equal parts skepticism and trepidation- would this be an online platform that would make me, and others editors to boot, obsolete?

Right off the bat I was impressed.

Look, I won’t lie to you nice people, I was approached by someone from Grammarly to partner with them [by writing about their product and beginning this blog post with “I tried Grammarly’s check grammar free of charge because [insert clever/funny reason here].”] with the result being that I would receive a $10 Amazon gift card. Even after taking them up on it, though, I resolved to be as honest as possible, because you can trust me when I say that there isn’t a purchase of $10 or under from the world’s largest online retailer that would be able to force me to type the words “wow, what an easy-to-use service they are providing.”

For example, I took a paragraph from Gordon’s post yesterday and pasted it into the “writing-enhancement platform” to see if I missed anything-

-and was informed of a number of things. For one, that it is a wordy sentence, which I already knew, but also that there is some incorrect tense form in the dependent clause, the word blah was repeated, and there are some issues with the passive voice. As you can see from the screencap below they suggest “the incompetent government absorbs it” which really should be “absorb” instead; it’s still a good point nonetheless.

And it’s in that last bit where I regain quite a bit of confidence. While Grammarly is most certainly able to direct you to areas that may require a closer look or rewrite it’s not fully capable of providing the proper alternative. It’s fantastic for eliminating wordiness [it seems to hate the word “really”] and working through tenses, but it has its limitations.

Not only that, but if you’re not assured that Grammarly has done all that it can for you there’s even the option to send your article to their very own proofreaders, who will correct your mistakes for mere pennies a word! If that’s not assurance that the human editor will be around for at least a few more years to come I don’t know what is. 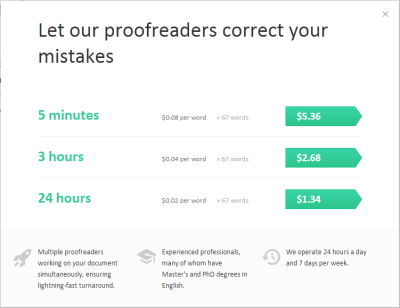 Now it’s no secret that all programs and online services require constant patches and so on to keep up to date, but with English’s rapid rate of evolution how will the tech people and grammaticians at Grammarly manage to keep up? Similar to MS Word you are able to add words to their dictionary, but what about changes in grammar?

Surprising me a second time, the program appears to accept the word “because” as a preposition, which was by no means acceptable even a decade ago. It’s only within the past year that linguists have begun referring to it as the “prepositional-because” or “because-noun”. This of course doesn’t cover all the nuances the English language begins to accumulate, but that’s literally the most impressive thing about it.

As a final point, this online proofreader cements its place as a product for the internet by featuring a freaking [apparently not recognized as an inappropriate colloquialism] plagiarism checker, down to the percentage. It even shows you how to cite whatever source you may have quotes, which makes it perfect for students writing research papers.

All in all, Grammarly is an extremely impressive program with many applications, allowing you to specify whether you’d like proofreading for an academic essay or just a casual email. Most importantly for yours truly, however, is that at this point in time I machines are not yet capable of replacing me. That’ll help me sleep well tonight.

Grammarly is a subscription-based service. Options range from:

This entry was posted in advertising, internet, language, review, writing and tagged because, editing, editor, english, evolution of language, grammar, Grammarly, I for one am not yet ready to welcome our computer overlords, internet, literally, plagiarism, program, proofreading, review, software, writing, writing-enhancement platform. Bookmark the permalink.