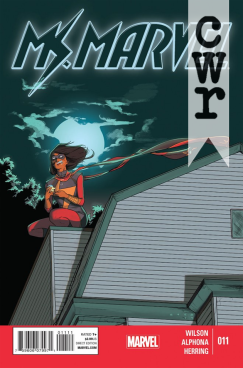 As predicted in my last review, this issue does in fact feature the downfall of the villainous Inventor. What I did not foresee, however, is how Alphona would be bringing his A-game when it came to illustrating our shapeshifting heroine’s triumph over evil. Seriously, there are some jaw-droppingly beautiful splash pages featured here.

For the most part my recaps of Ms. Marvel are exactly that, short summaries of what went down in addition to some exploration of any themes therein, so I feel it only fair to take a few paragraphs to focus on the art itself. To begin with, a “splash page” is:

Issue #11 features three such pages, which would be more than overdoing it according to J. Caleb Mozzocco, one of my favourite comic book journalists. The reason for that being when you only have twenty-ish pages of comic [21 in this case, including the recap page] having one of them taken up by a single panel can make it feel like you’re not getting enough bang for your buck. Rest assured that that could not be further from the truth in this case-

While the entire page is indeed taken up by a single illustration there’s a strong sense of movement, with readers being able to trace Kamala’s journey through the innards of the deathbot with ease. The word boxes help to anchor a start and end point, and the intricacy of the gears as well as her cartoonish contortions keep you from turning the page even after you’ve finished reading the words. I could go on praising Alphona’s work, though, so as to the actual narrative- 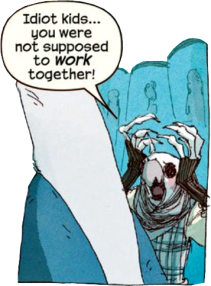 Continuing [and potentially concluding, as this is the arc’s last issue] the theme of youth’s potential and its dismissal by general adulthood, The Inventor’s former fuel sources continue to rail against him. Kamala’s bravery is infectious, and the fact that they remain inspired in the face of an avian cloned inventor and his destruction-dealing construct speaks for itself. In relation to that, this issue is all about support.

Even before she shrinks down and crawls into the murder-mech Ms. Marvel has the realization that so few other heroes do until it’s far too late:

“All the heroes I’ve ever loved work in teams. I get why that is now. Even the most embiggened person needs help sometimes…”

She gives Bruno a call, and he deduces by the coded number of rings that he needs to call the cops and send them to her location. She isn’t a heroine who believes in doing things on her own; pride is not her fatal flaw. It’s the police who arrive and, after The Inventor’s deathbot has been dismantled, attempt to arrest him. It’s the officer from Issue #4 who thanks her for her hard work, mentioning-

“There’s worse things on the streets of JC than a crazed bird guy, and now that you’ve made yourself obvious, they’re gonna come lookin for you.”

-words that clearly make up a warning, but that also bear his blessing in that he doesn’t tell her to stop what she’s doing. There’s an implicit amount of trust in his words, that she’s going to help them in their work to uphold justice and fight crime, that she is capable of that responsibility. It’s in stark contrast to the birdman who has been her nemesis, an adult with the understanding that the young can do what needs to be done.

I suppose I should also mention that The Inventor is presumably crushed by his very own killing machine, and that it’s his “sidekick” who outright asks the question: “Who do they think cloned Thomas Edison? Who invented the Inventor?” He’s a threat that remains at large, but probably won’t be appearing in the issue dropping two weeks from now because it’ll feature Loki! If that doesn’t get you excited we would probably not be friends.

To end with, roughly one year ago was the debut issue of Ms. Marvel #1! That’s twelve months and over ten issues of a stellar comic book some people didn’t think would make it out the gate! Diversity allowed for a fresh, unique story that wasn’t being told anywhere else by anyone else, and of course Wilson and Alphona [with a little help from Wyatt] have devoted some of the best work of their careers to the title. Here’s to many, many, many more!

The Ms. Marvel Visual Gag You Shouldn’t Have Missed: Bruno’s amazing
t-shirt aside [it advertises the SCHOOL OF KUNG FU
TREACHERY], I couldn’t ignore this amazing callback to the riverbed debris from the second issue. Yes, Sal’s Used Cheese boxes really do get around.