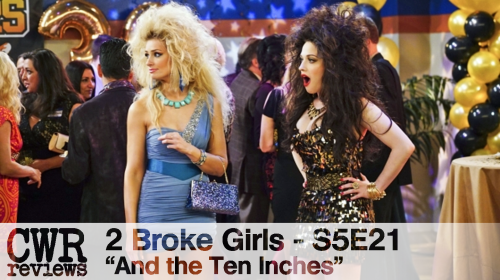 It’s weird to type the words “home stretch” without having my mind wander to how the the Raptors are doing in the NBA playoffs. To stick with illustrations involving my hometown’s professional sports team it doesn’t matter if the Raps beat the Miami Heat tonight, tying things up 1-1, since the goal is actually [and I’ll admit, implausibly] winning the entire thing. In a similar fashion it doesn’t actually matter if 2 Broke Girls delivered a spectacular episode or crashed and burned comedically [as per usual, it landed somewhere in the middle] since it’s the season finale that will [or won’t] draw audiences back this fall.

Choosing not to waste time on filler like last week’s episode, “And the Ten Inches” begins to actually move forward with the Dessert Bar idea that Max came up with four episodes ago. Construction is actually underway on what was once Max’s Homemade Cupcakes, with their first hiccup being that there’s definitely not enough room for both the bar and seating [more on that in “The Title Refers To” section below].

Angie, played by insult comedian Lisa Lampanelli, is one of the owners of the pizzeria next door and threatens to sue do to the very obvious visible damage that the renovations are causing to their back office. Randy is once again very pivotal to the plot of this episode, as he first charms his way into her letting the work to continue and then seeks to convince her to actually rent out the space by agreeing to be her date to her high school reunion.

There’s a potentially fresh conflict between Max and Caroline as the latter is the one who most supports what is essentially pimping out the Hollywood lawyer. While she’s definitely not happy about it, the backlash isn’t significant enough to really affect their relationship and instead Max directs all of her fury towards Angie. Even that is wrapped up quickly as a terrible former classmate rears her ugly head and causes the two girls to pity their adversary and continue the facade for her sake.

I could keep writing about the nature of conflicts in sitcoms and whether they can even be significant or long-running, but I feel like I need to return to Randy once more. Trust me, I’m very well-aware that much of last week’s review was dedicated to the character, but I just don’t know what to do with him! He’ll obviously feature in the season finale, but will he reappear in 2 Broke Girls Season 6? Could we possibly return to the show with Max still in a relationship and with her and Caroline running the completed Dessert Bar?

With questions as big as these surrounding 2 Broke Girls it makes sense that Sophie and Oleg’s pregnancy B plot has barely been simmering in the background. This episode even shelves Jennifer Coolidge’s character, with her doctor actually confining her to bedrest. With her being five month’s pregnant in “And the Ten Inches” [with the baby already at 15 lbs] I suppose it’s unlikely that she’ll finally give birth in the finale, but does that also mean she’ll be pregnant with the show’s return?

That’s a lot of questions, I realize, and pretty much all of them will be answered in part in next week’s season finale, “And the Big Gamble”. As it stands Caroline finally spent some of that sweet, sweet movie money, and by making that investment in her business with Max the audience is likewise being asked to care about yet another entrepreneurial endeavour [preferably while laughing laughing along the way]. While I can’t promise the latter, consider me as on board as I possibly could be for the former.

The Title Refers To: Randy takes a look at the blueprints that have been drawn up for their Dessert Bar and observes: “see the two dashes after [the ten]? Those are inches, not feet. You got ten inches.” If only Caroline hadn’t hired an architect from the casual encounters section on Craigslist.