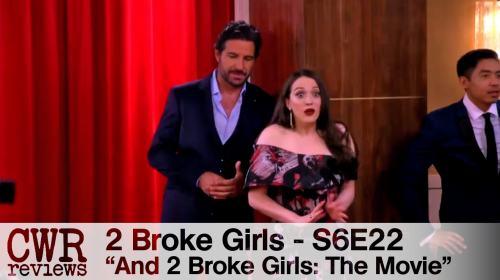 This is the fifth I’ve reviewed, so in addition to what’s expected of a typical season finale it’s also worth considering how 2 Broke Girls in particular tends to wrap things up. For the past few episodes what can only be assumed are the profits from Max and Caroline’s Dessert Bar have been climbing, but without any indication as to why that number is important. Now that the season is coming to a close tradition dictates that money come back into focus. END_OF_DOCUMENT_TOKEN_TO_BE_REPLACED 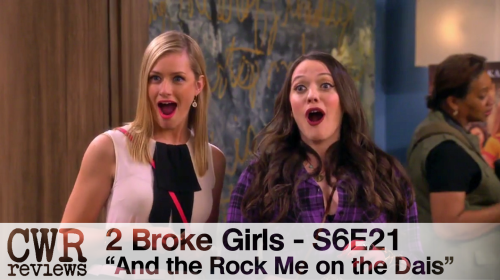 Look, at this point pretty much everything is pointing towards 2 Broke Girls not getting a Season 7. I have a Google Alert set up for any related news, and week after week I’m sent articles tracking its flagging viewership and overall ratings. At 4.6 million, last month’s “And the Alley Oops”  marks the smallest audience the show has ever had throughout the course of it airing. What’s more, at the time of this writing CBS still has yet to renew the sitcom for its 2017 fall lineup.

With all of that being said, and this very likely being the penultimate episode, I’m definitely realizing very late in the game that this show is all about Ms. Caroline Channing.

It’s an odd prospect to consider given how much the sitcom has focused on Kat Dennings’ Max Black. Dennings objectively has the larger personality and star power, given her minor role in the Thor franchise. Considering how much 2 Broke Girls has doubled down on their crass humour and one-liners, Max shares the title role but commands a larger portion of the spotlight. So what do I mean when I say it’s really all about Caroline? END_OF_DOCUMENT_TOKEN_TO_BE_REPLACED

I mentioned not too long ago that chances are Season 6 of 2 Broke Girls will be 22 episodes. That means that “And the Alley-Oops” is the antepenultimate installment, and you would hope that at this point the showrunners would begin lining things up in preparation for the finale. Nope, this is just an episode about bowling.

Caroline and Bobby have some mild conflict, but even it describing it that way feels hyperbolic. Max is very much a footnote to the episode, and on the outskirts the rest of the diner gang get up to their own light shenanigans. In other words it’s pretty par for the course, as 2 Broke Girls has been lately, but at Episode 20 we should expect a little more. END_OF_DOCUMENT_TOKEN_TO_BE_REPLACED

It’s funny, because with a title like “And the Baby and Other Things” you would think that this episode would be centred on little baby Barbara and her parents, Sophie and Oleg.

What’s also funny is that I wrote that opening line before watching this episode, and hey, I was exactly right. The “Baby” in question actually has nothing do with the daughter of the most-cheered-for couple on prime time television. That being said, Sophie and Oleg were actually one of my favourite parts of an episode that continues the trend of Season 6 being heavily back-loaded with Caroline-centric plots. END_OF_DOCUMENT_TOKEN_TO_BE_REPLACED

I couldn’t believe my eyes when I began watching the promo for this week’s 2 Broke Girls. Max meeting her father, really? Typically any references to her upbringing are about her extremely neglectful mother, and the last time that was touched on in any major way was literally three seasons ago.

That episode was the Season 3 finale, “And the First Degree”, and it’s impossible for “And the Dad Day Afternoon” not to be compared to it, for better or for worse.
END_OF_DOCUMENT_TOKEN_TO_BE_REPLACED

2 Broke Girls, S6E17 “And the Jessica Shmessica”: A TV Review

Caroline won’t shut up about her boyfriend Bobby. You know, that cute guy Bobby, her boyfriend? Given their burgeoning relationship, and the fact that he also mentions her in the same way, it makes perfect sense that this would be a Caroline-centric episode. With how few and far between these moments are, however, it doesn’t seem like the writers’ room is as comfortable with the setup as they probably should be.

That being said this is just about as linear a narrative as you can get, and while the premise is tried and true the actual scenario presented is a little harder to swallow.

Meeting your significant other’s family is such a comedic staple that it spawned an actual trilogy [everyone forgets Little Fockers], so Caroline being invited to Bobby’s childhood home, which he moved back into after his father died, is pretty standard fare. His insisting that Max go as well also makes sense, since he considers her Caroline’s family. What’s far less plausible is the entire diner staff being able to just tag along with them. END_OF_DOCUMENT_TOKEN_TO_BE_REPLACED