I need to state upfront that this post is not an all-encompassing response to the Black Lives Matter movement [which I will be shortening to “BLM”] and the concept of White privilege. The title instead refers to a blog post titled “Black Lives Matter and White Privilege”. Written by Ghanaian-Canadian Samuel Sey and appearing on his site Slow to Write, the article delved into his opinions on both topics.

Regular readers of the blog will know that I don’t often respond to other blog posts in this manner; the last time I did so was back in 2014, to the article “Meet The Poster Child For ‘White Privilege’ – Then Have Your Mind Blown”. I wasn’t able to read it without addressing, and outright dismantling, many of the arguments presented, and having read Sey’s post I found myself in a similar position.

It should be mentioned that Sey and I have vastly more in common with one another than I do with Tal Fortgang, the writer of the aforementioned article. He is a fellow Canadian, POC, and Christian, actually attending a church in Toronto [although he lives just outside it]. Sey and I also, and I believe I can say this with confidence, care about the wellbeing of the Black community in North America. With all of those similarities in place it made it that much more difficult to read his post and find myself disagreeing with so many key points.

Sey begins the article by listing a few statistics about the Black community in both Toronto and Canada, seguing into the origins of the term “White privilege” [“White Privilege and Male Privilege”, an article by Peggy McIntosh published in 1988] and agreeing that the advantage is “in [his] opinion […] unquestionable.” So far so good. Where things get a little touch and go for me personally is a large chunk of the following paragraph, which reads:

“The problem with these concepts of privilege [heterosexual, cisgender, and Christian] is not necessarily with their validity—as there is some truth to them—the problem, however, is that so few are willing to admit that these privileges largely exists because of self-inflicted wounds by the unprivileged. White privilege is not the exception.”

Directly stated in the following paragraph is the perspective that BLM’s “adamant refusal to embrace the truth ensures that the self-inflicted wounds within Black Canadian and Black American communities will remain uncared for and untreated.” This is also the reason “why [Sey hates] Black Lives Matter.”

The primary evidence used concerns the BLM protest in Charlotte that occurred last month over the shooting of Keith Lamont Scott by a police officer. In particular the fact that Justin Carr, a Black man, was shot and killed by another Black man at the gathering. Sey decries BLM for a lack of outrage over this happening and mourns Carr as “seemingly just another unimportant victim of what Black Lives Matter considers a myth—Black-on-Black crime”.

-which listed the first of its “11 Major Misconceptions” as “The movement doesn’t care about black-on-black crime.” I’ve tried to pare down their explanation as much as possible, but only managed to cut the final three sentences [emphasis mine]:

“The idea that black-on-black crime is not a significant political conversation among black people is patently false. In Chicago, long maligned for its high rates of intraracial murder, members of the community created the Violence Interrupters to disrupt violent altercations before they escalate. However, those who insist on talking about black-on-black crime frequently fail to acknowledge that most crime is intraracial. Ninety-three percent of black murder victims are killed by other black people. Eighty-four percent of white murder victims are killed by other white people. The continued focus on black-on-black crime is a diversionary tactic, whose goal is to suggest that black people don’t have the right to be outraged about police violence in vulnerable black communities, because those communities have a crime problem. The Black Lives Matter movement acknowledges the crime problem, but it refuses to locate that crime problem as a problem of black pathology.“

Also worth noting is what exactly BLM is and was created to be. As laid out by co-founder Alicia Garza, its very inception was in response to both when “17-year-old Trayvon Martin was post-humously placed on trial for his own murder and the killer, George Zimmerman, was not held accountable for the crime he committed” and “the anti-Black racism that permeates our society and also, unfortunately, our movements.”

As “an ideological and political intervention in a world where Black lives are systematically and intentionally targeted for demise” the focus of the organization is violence perpetrated by those in power against Black people. It’s not to say that intraracial crime isn’t a problem, but that it’s not the issue they’re working on addressing. Cue the [now hopefully classic] analogy in the face of “All lives matter” of someone racing down a cancer ward yelling how all diseases should be eradicated and extend it to a person accusing a diabetes fundraiser of not caring more about influenza.

My response to Sey’s follow-up comment about BLM and reverse-racism is easily summed up by a bit of stand-up from comedian Aamer Rahman:

To wit, Rahman explains that in order for reverse-racism to exist we would have to live in a sort of alternate timeline where people of colour have, throughout history, become the social, economic, and political powerhouses, leaving people of European ancestry lacking any and all of the privilege they have in this world. In other words, racism is more about power than merely disliking a particular group of people. To draw a parallel, it would be like straight people complaining about being victims of “heterophobia” in spite of the fact that they still make up the vast majority of the world’s population, as well as having accurate and positive representation in media both today and spanning back centuries.

Sey’s next point is actually the one that he dedicates the most space to, likely because he’s able to relate to it on a personal level. His assertion is that [emphasis his] “white privilege largely exists because Black lives do not matter to Black fathers” is supported by his own childhood in which he “never experienced the privilege of ever laying eyes on [his]  father”.

His statement that “absentee Black fathers produce self-inflicted wounds that cause so much pain for Black Canadians and Black Americans” isn’t really one that I can disagree with. Many studies have shown single parent households to have a negative effect on childhood development. That said, Sey never once delves into why the statistics he lists regarding family demographics are what they are.

Could the fact that there are less Black Americans born into two-parent households than White Americans bear any connection to the fact that “more than one out of every six black men who today should be between 25 and 54 years old have disappeared from daily life”? That’s 1.5 million Black men and potential fathers that are absent from the Black community, begging the question of whether or not there’s a connection between impoverished living conditions, crime, and two-parent households.

I would like to think that that factor joins a slew of others in lieu of simply laying the blame at the feet of the Black fathers who “Black lives do not matter to”.

Sey ties this back to BLM by claiming that the organization “knows [about the absence of Black fathers] too” and that “it doesn’t matter to them.” He points towards the “Black Villages” section of the Guiding Principles page on the BLM website, which reads: 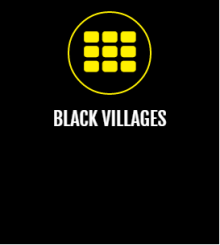 “We are committed to disrupting the Western-prescribed nuclear family structure requirement by supporting each other as extended families and ‘villages’ that collectively care for one another, and especially ‘our’ children to the degree that mothers, parents and children are comfortable.”

My assumption, which very well may be wrong, is that Sey noted the absence of “fathers”, while “mothers” and “parents” are listed, and took it to mean that the organization doesn’t care about them. That said, I don’t see why they wouldn’t be counted among “parents”. What’s more, the idea of a community being like a village brought to my mind the early church in Acts, which was described as being “together and [having] everything in common,” their communal living emphasized by the fact that they “[sold] their property and possessions to give to anyone who had need.” Why shouldn’t the Black community, or any other, choose to live in this manner?

It’s somehow fitting, given the last time I wrote one of these blog posts, that Sey closes by using a variation of the phrase “check your privilege”. Instead of asking his White neighbours to do so, he shares that he would,

“rather encourage them to count their blessings. And while I’m at it—I’ll count mine too. Considering where and what I come from, I’ll never stop counting.”

While he elaborates on the problems both in the Black community and BLM, what Sey doesn’t do is offer any solutions. His only course of action is to encourage White people to “count their blessings”, which doesn’t at all draw back to the problem of police brutality against members of the Black community. Furthermore, he believes that the lack of privilege the community faces is largely due to “self-inflicted wounds” as opposed to any outside forces. “Physician, heal thyself,” Sey appears to be advising, to which BLM asks: “How can I heal at all while being actively beaten?”

3 responses to “Re: “Black Lives Matter and White Privilege””