Move over, 2 Broke Girls, Superior Donuts owns the 9 PM Monday time slot now! The half hour delay of gratification for fans of the sitcom may have been frustrating, but it’s far from something to worry about. After all, it’s not like CBS has moved the show to Friday evenings, where programs go to die.

This week feels like things are back to basics, although the showrunners do try something new within that framework. What’s notable is the absence of an expected Sophie and Oleg B story, with the two narratives instead belonging to the title characters. That’s right, while we get our regular dose of Max we’re also treated to much more Caroline than usual!

Not to be cynical regarding their treatment of one of their two stars, but the reason for that is clear: Caroline now has a love interest. Two weeks back we finally closed the door on Max and Randy’s relationship, or “Rax”, as I liked to call it. We’re now firmly in the era of . . . “Cobby”? “Baroline”? They don’t have good names for cute couple portmanteaus, but that’s life I guess. The Caroline and Bobby pairing off is also what ends up temporarily separating the roommates/best friends.

As someone who has been running this blog for going on six years now, as well as a college publication prior to that, I know how important it is to be on top of things as well as how difficult it can be to relinquish control. It turns out that the reason Caroline and Bobby have a day date scheduled is not because of the latter actually being married, but because the alternative would mean Max taking charge of the Dessert Bar by herself. To be clear the reason for Caroline’s hesitancy is not because she wants to be with her and keep her company, but because she doesn’t trust her.

I described Caroline owning the B story, but in reality her and Max own two halves of a single narrative this episode. Sequestered in a cushy new movie theatre the former heiress wrestles with anxiety over the Dessert Bar still standing when she returns, while the latter has to manage the stress of running a bar solo [they’re embarrassingly understaffed, and probably should’ve kept that bartender]. It’s really not about progressing Bobby and Caroline’s relationship or Max’s ability to handle things on their own, but instead about one trusting the other. Their friendship is familiar territory to be sure, but it’s nice to have their conflict be centred more around their business again.

Caroline’s concern skyrockets when, right before she leaves, a number of sorority girls start flooding in, and to be fair Max is nearly overwhelmed by the co-eds vomiting, passing out, and, worst of all, requesting separate cheques. Ultimately everything works out, however, with Earl and Han acting as impromptu servers and Max using her years of experience as a Negotiation Expert [I have no idea where that came from] to create an agreed upon payment method involving PayPal, Venmo, a manicure, and the rental of a gay friend named Dave for a sister’s wedding.

While on the surface the newfound trust and corresponding responsibility seem pretty straightforward, the show also establishes that Max and Caroline are not always a package deal. Yes, they’ve split off in the past, but never in regards to their shared enterprise. The line “Is it strange that I’m a little sad you don’t need me?” is meant to establish a quick emotional beat, but it also promises that their reliance on one another is less strong than it once was. This could be a step towards spending more time apart, and I’m curious to see if anything more happens with that.

New Total: $3,145. The Dessert Bar was really poppin’ this week. Profits are good, I guess.

The Title Refers To: Caroline explains to Bobby that “turtles can sense if their turtle best friend is stuck upside down on its shell, its turtle legs all wiggling in the air”.

She saw the dancing hotdog, too. She really has no excuse. 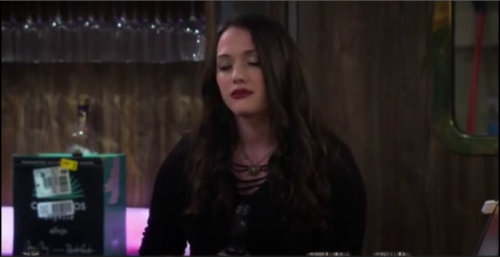 “I was in a sorority once. Until they found me.”

Bobby, played by Christopher Gorham, is the latest love interest to grace 2 Broke Girls, but I noticed a little something about him, in particular because of how quickly he followed on the heels of Ed Quinn’s Randy. With that being said a new feature this week is focused on the men in Max and Caroline’s respective lives, and is a little something I like to call:

“And the Turtle Sense” was written by Michael Glouberman, who also penned “And the Sophie Doll”. Although these are the only episodes that he’s able to take the majority of credit for it’s worth noting how seamlessly it fits into the 2 Broke Girls installments that precede it. The show’s cast is made up of very distinct voices, such as they are, and a line for Han would feel wrong coming from, say, Earl or Sophie. When it comes to Bobby, on the other hand…

His lines are written and delivered with a tone that’s flirtatious and, importantly, only lightly jokey. Given the penchant for Max and co. to deliver the zingers both Randy’s and Bobby’s lines are more grounded, providing comedy but only in moderate doses. The following line has a bit of humour to it, but it’s more sweet than anything else.

“Okay, I know you’re talking about me, but I get jealous.”

-as he runs towards the bathrooms is ludicrous on the surface, but he’s responding to the actions of other characters, namely Sophie and Oleg engaging in some poultry-assisted lovemaking. What’s more, both lines could easily have been said by Randy and you wouldn’t think twice about it.

At this point Bobby’s only starred in two episodes so far, but we don’t know anything about him besides the fact that he’s attracted to Caroline. I’m not saying that he needs to be fleshed out to the point of becoming a primary castmember, only that having him become his own character can only help audiences to become more invested in his and Caroline’s relationship.