2 Broke Girls, S6E14 “And the Emergency Contractor”: A TV Review 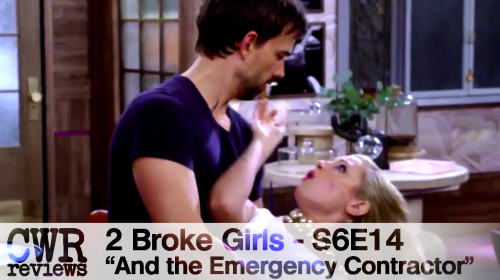 First off, I want to apologize for the quality of the header image. As some of you may know I had to switch over to screencapping previews on YouTube some time ago due to CBS’s refusal to update the photo section of the 2 Broke Girls section of their website. Most have turned out okay, but this one is not very good. I really am sorry and will try to do better next time.

Yet another point I’ve touched on again and again is whether this is the last we’ll see of Ed Quinn’s Randy, and I think I can finally  say that this is the case. Unless, of course, the show’s ratings [which I’ve been keeping a close eye on] end up tanking 2 Broke Girls Season 7, in which case his return seems both inevitable and justified.

There’s a lot going on in “And the Emergency Contractor”, and to my delight it’s pretty solid narratively, as well as comedically. To immediately address the most significant event, Randy is back! Max and Caroline return from their three-episode road trip and before they know it they find that the hunky Hollywood lawyer has landed himself in the hospital! Max is still his emergency contact! They rush to go help him.

Discomfort has played such a large role when it comes to Max dealing with her breakup with Randy, and I’ve spotlit her emotional vulnerability a few times now. What we haven’t seen in a few weeks, however, is her displaying that weakness while interacting with him. Up to this point it’s mostly been babbling to Caroline about how this is all just a “dance” her and Randy go through, and that they’ll get back together before you know it. I actually believed that in last week’s “And the Stalking Dead” hearing Randy tell his client that he’s doing all he can to get over her was the final nail in the coffin, no pun intended. Yet there she is, standing by his hospital bed, musing aloud about how he’s come back for her.

“Max, what are you doing here?” are the first words out of his mouth.

When she asks if he’s there to visit Randy ruefully admits “I was trying not to see you.” Max tries to explain that their breakup over the phone wasn’t real, also revealing that both she and Caroline followed him to Texas. It takes a bit, but eventually they both state that the two of them together may not be the best idea-

“Max, look at us. I ran to the airport and got hit by a cab trying to get out of here ’cause I was tempted to see you. And you broke into a hospital not to steal drugs!”

“Maybe this relationship is bad for us.”

Yet that doesn’t stop Randy from asking, one final time, for Max to move to California to be with him. He can’t leave his firm but he wants them to work out. Her response is that at one point she would’ve agreed without hesitation, but that now she cares, about stuff and people and the life she’s built there. She follows up her statement by asking “So what happens now?”

“I think we kiss good-bye.”

But they don’t. A hug is also off the table for similar reasons, i.e. him being shirtless and their sexual chemistry being of a particularly explosive nature. Notably it’s Max who decides against it both times. They settle on a handshake, the least sexual form of physical contact.

It’s not often that I’ll write up a blow-by-blow like that, but I thought it was important to go through each step of what is most likely their final breakup. Dennings once again exhibits her impressive emotional chops, while her character displays an admirable sense of self-control. That’s where Max’s character growth truly lies, not in her reasons for turning him down, which are nothing new, but in how she handles the entire situation with so much maturity.

That theme of maturity runs throughout the B-plot of this episode, with Sophie joining a mommy support group with the intention of becoming a better parent to her daughter. She’s surprised to find that the gathering is really meant to be a place for moms to “trade pills, to get trashed, and to fantasize Gone Girl-ing our husbands.” Given the contrast between her exaggerated personality and the seemingly normal American women speaking unaccented English, surprisingly she appears to be the most functional caring mother present.

There’s a lot of peer pressure to conform to the mommy support group, with Sophie repeatedly asking if she should be doing the same things they are serving as a punchline to highlight the awfulness of their actions. It all culminates in the Dessert Bar, when she’s accused of “secretly taking care of [her] baby while [they’re] having mom’s group”.

“I love my baby!” she exclaims, to which one mom retorts: “Then why don’t you marry her?” Sophie unfailingly responds with her go-to “Should I?”, but she doesn’t consider it too long. She roars back at them, loudly and proudly: “I’m a good mom, and a good mom doesn’t marry her baby!”

I’ve dragged Sophie for being a bad parent in the past, but seeing her abstain from engaging in hedonism to nurture her child is a pleasant and somewhat unexpected change, and yet another example of 2 Broke Girls caring enough about its characters to have them progress.

Finally, we have Caroline. Her flirtation with Bobby, the “Emergency Contractor” in the title, garners a few decent comedic moments, such as her realization that when it comes to quipping sometimes less is more-

-but ultimately their romance pales in comparison to what’s going on in both Max and Sophie’s lives. While her plot carries more jokes, and her being with someone/anyone is certainly a step forward, it feels insignificant by virtue of taking place in this particular episode. Caroline’s most important role this week is closing things off, telling her best friend “I wouldn’t leave you, either.” The studio audience cheers and we at home are left knowing that this is a bond that won’t be broken, no matter what. It’s a reminder that in spite of groundbreaking change the core remains the same. 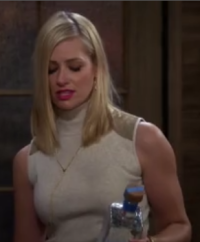 This blog is in no way sponsored by Olmeca Altos Plata tequila, but if they wanted to throw a few bucks my way I wouldn’t be mad about it.

New Total: $2,372.00. Considering that the mommy support group walked out without paying after Sophie’s outburst, you’d think that their profits would actually be less, especially since one of them ordered a bottle of Olmeca Altos Plata tequila to go with her flantini. I brought that stuff to a party once, it’s pretty good.

The Title Refers To: Bobby, the emergency contractor that Oleg needed to hire since he kicked the last one off the premises as a means of affirming his own masculinity.

Scrubs has long-been lauded by actual doctors as being a stellar example of their day-to-day lives, particularly when it comes to the accuracy of medical jargon and coping with the loss of patients. If upcoming episodes of 2 Broke Girls have them returning to a jargon then you’d better believe you’ll see more of this recurring feature simply known as:

Max and Caroline dress up as nurses to get to Randy, and the latter is pulled away by a woman declaring that “[they’ve] got a 41 in here and he’s a squirter.” The latter must leave to assist what sounds like an emergency, buying her friend the time she needs. When Caroline returns she reveals that:

Unfortunately I couldn’t find anything in several lists of hospital slang, lingo, and jargon referring to what a “41” might be. Emblem Health, a health insurance company, does however have a page explaining that:

2 responses to “2 Broke Girls, S6E14 “And the Emergency Contractor”: A TV Review”