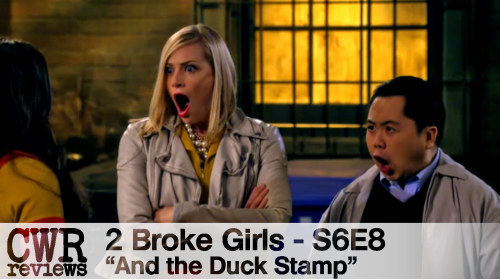 While it’s certainly disappointing to have to write, a run of two decent consecutive 2 Broke Girls episodes is really not bad at all. I thoroughly enjoyed “And the Rom-Commie” as well as “And the Sophie Doll”, and even though they weren’t incredible or even the best the show has ever been, their airing one week after the next felt like an encouraging change of pace for the CBS sitcom. It’s unfortunate that in spite of the season’s eighth installment continuing to land successful physical gags and better utilizing their cast neither are enough to prop up a paper-thin plot.

Which doesn’t mean that those two points are unappreciated, by any means. Han is actually the driving force of this episode, and while he’s been the focus in past seasons this week he manages to participate in the joke without necessarily being the butt of it. Also notable is the fact that, besides being POC on ensemble comedies, this is the first connection I’ve ever made between him and Sergeant Terry Jeffords on Brooklyn Nine-Nine.

The clue lies in what he’s holding.