I watched the Mayweather-Pacquiao fight.

Every punch that Pacquiao landed was satisfying, even though having watched it makes me feel like a terrible person.

While I disagree with Pacquiao’s hard line stance against birth control of any kind, it was easy to root for a guy who consistently pours the money he wins back into his community and a variety of charities. Reportedly, Pacquiao will even be giving away half of the prize money he earned from his fight with Mayweather.

Let’s also not forget how awesome it was that Pacquiao invited Jimmy Kimmel (dressed as Justin Bieber) to join him for his grand entrance.

END_OF_DOCUMENT_TOKEN_TO_BE_REPLACED

Giving Money [Minus the Ice Bucket]

I’d say there’s no better time than right now to discuss what we do with our money in light of the hundreds upon thousands of Ice Bucket Challenge videos that have been taking up most of the internet the past few days [FYI, Emily Blunt’s is the best]. Just yesterday my youngest brother posted one to Facebook, so it’s gotten just about as close to home as it possibly can.

Now there’s been a lot of discussion about how this appears to be just the latest trend, which probably has a lot to do with the sheer number of celebrities who are getting in on this. What can’t be argued with, though, is the fact that in a very short time this challenge has resulted in over $50 million being donated for ALS, which is roughly 80% of what the organization raised last year. That’s big, that’s worth applauding. I’m going to end this paragraph on that note.

What else it is, though, is fun. It’s fun watching people like Bill Gates and Nick Offerman get soaked in frigid water and calling out their peers. It’s fun when our peers do it to us, and when we in turn choose to douse ourselves in glacial H2O. That makes it easier to give, I think, there’s this pervasive lightheartedness about it that makes us more inclined to reach into our wallets and give howevermany dollars towards ending Lou Gehrig’s Disease [an ailment I only very recently connected to these shenanigans]. Giving gets infinitely harder when there’s none of that fun involved.

Here’s my favourite scene from a pretty bad 2004 Jackie Chan movie [no offence to Steve Coogan, but we weren’t watching it for him]:

END_OF_DOCUMENT_TOKEN_TO_BE_REPLACED

These are some of the kids at the Place of Rescue orphanage in Cambodia.

The reason I want to talk about these kids is because on June 20th one of my best friends was evacuated from her home in Calgary, B.C. due to extensive flooding. 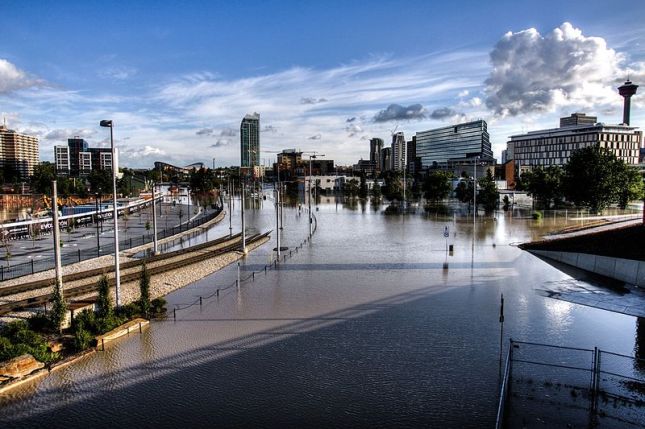 There was actually a lot of cool stories I began hearing after the flood. Like the time the city asked for a few hundred volunteers to come out and help clean out flooded homes and a few thousand showed up instead.

But the coolest story I heard was actually about those kids at the orphanage in Cambodia.  About six days after my friend was evacuated kids and staff at the place of rescue pulled together and sent a total of $900 to help with flood relief in Calgary. Apparently they had each been given the equivalent of about $12 Canadian money by the Cambodian prime minister’s wife not long before the flooding here in Canada. When they heard about the damages they decided to send some of the money they had been given to help with flood repairs. The reason I find this so exciting is because here in North America we tend to think we don’t actually have any real problems.

I’m not saying these horrible things aren’t happening. I’m not saying there isn’t a real need, or even that we shouldn’t send money overseas. All I’m saying is that we need them just as much as they need us. When the discussion of poverty is constantly framed in a way that leads us to believe we have the power to save lives it tends to lead to a bit of a god complex.

Not to mention that it also allows us to forget that often we are part of the problem. According to Blaine Sylvester, director of the Calgary-based Canadian

Foundation Place of Rescue, the kids at the orphanage don’t feel like they are so  poverty stricken that they can’t share with their Canadian friends: “The children may live in spartan conditions and sleep 10 to a house with a house mother, but they’re safe, they’re secure and they’re loved.” While Canada and the States are ranked well below countries like Fiji, Nigeria and Ghana on the Global Happiness Index we still assume North Americans need to teach countries we perceive to be “3rd world” how they ought to live.

But while more and more North Americans begin to suffer from donor fatigue, the kids at Place of Rescue seem more than happy to teach us how to give. 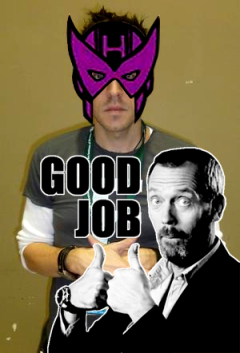 Imagine my joy when I found out that Hawkeye #7 is being released on January 30th, making this post both contemporary and relevant. Redundancies aside, Matt Fraction is a man who’s worthy of a fair amount of praise.

First of all, he’s a man who clearly loves comics. Secondly, as the current writer of Fantastic Four he’s basing the Reed family on his own wife and two children. Thirdly, he’s married to extremely talented comics scribe Kelly Sue Deconnick, who has revitalized Captain Marvel in a huge way. Fourthly, he is also the writer of Marvel’s new-ish Hawkeye title, and it is fantastic.

Fraction’s take on the character is through the lens of a man who, when not rubbing elbows with super soldiers and Norse gods, is just a guy. Take the following panels into account:

Okay, that about just sums up what I said. Check this one out, too: 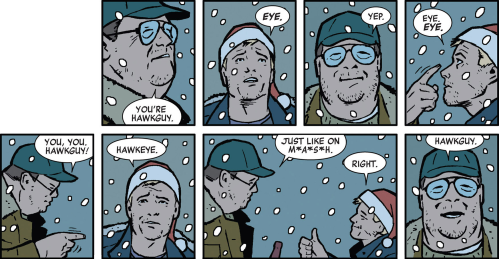 So now, we’ve established that Matt Fraction’s writing is great. David Aja, who illustrates the title, is also great [at drawing]. Greatness all across the board, you guys [and girls], this is a comic that you should be rolling your eyeballs across.

That’s worth a Fame Day. But you know what’s even more worth that? The cover on the left. It’s for, and the title of this blog post is pretty self-explanatory, Issue #7 of Hawkeye. Why is this a big deal?

For one thing, Fraction is taking time off of his current storyline to explore what happens when Hurricane Sandy hits Clint Barton’s neighbourhood. The real world affects Marvel’s that’s pretty neat.

Here’s something else that’s neat: Matt Fraction will be donating all of his royalties from the issue to Red Cross, which will work towards relief efforts for Sandy’s Victims.

That’s right, ladies and gentlemen, this man will not be making a cent off of the issue. It’s the story about “a girl trapped at a function that she can’t get out of when the hurricane comes, and about a guy helping his buddy move his infirm dad to safe ground” [check the above link]. It’s a story that, for every issue it sells, will benefit those who lost their homes due to a tragic natural disaster.

If you are a person who thinks they might want to get into comics, this would be a great place to start. It’s a smart, funny title written by a talented man, and it’ll be $2.99, a fraction [pun not intended] of which will go towards people that genuinely need it. Think about it. And at the very least, give the man some credit.