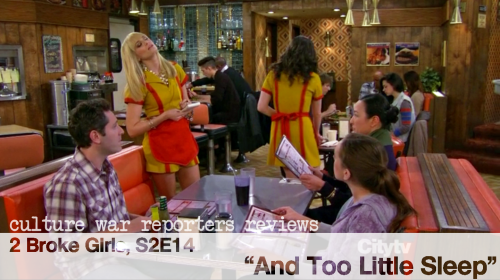 This episode begins with Caroline reminding Max [and the rest of us] that “this isn’t the diner where everything comes with attitude and E. coli.” The fact that the cold open takes place in the cupcake shop doesn’t stop her from snarking at a drumming customer in overalls, though. Insert comment from me about how the show’s centre seems to be moving further away from the diner.

Soon enough Andy shows up, forcing Caroline into hiding [they broke up, remember?]. It also kicks off a fairly decent running joke about how Max doesn’t recall having slept with the guy at the record store. Kat Denning’s delivery of the following line actually made me chuckle out loud:

Andy:  Oh, by the way, the guy at the record store says hi.

This conversation also reveals one of the big concepts in the episode: your friends keeping in contact with your ex. Max and Andy have bonded over texting each other pictures of unlikely animal couples, and you can rest assured that it’s going to cause some sort of trouble later on in the episode.

Ah, sorry, I forgot to mention that in this episode Max and Caroline are tired. Tired enough for Max to pull down her pants in the middle of the cupcake shop and for Caroline to doze off while taking orders. This creates complications, of course, when her sleep deprivation causes Caroline to remember that they have an order for 1000 cupcakes due the next day at 10 a.m.

So the girls race out, leaving Han hanging, only for Caroline to kick the shim out from under their oven, rendering it unusable. Fun fact: a shim is “a thin and often tapered or wedged piece of material,” and not a pronoun for transexuals like Caroline posits. Seconds later and the girls race back to the diner they abandoned to use the oven/kitchen there. Instead of being understandably upset, Han and the others are actually really cool about it, offering to stay up late and help finish their order. They’ve really tried to push the idea of them being a more-or-less happy, dysfunctional family, and this approach is more heavy-handed than most.

Also allow me to say that Matthew Moy, who plays Han, kills it this week with the material given to him. Max reaches around his body to show him how to properly ice cupcakes only to have him squirt the sugary glaze all over the place [haha, premature ejaculation joke, we get it]. Moy’s distressed cries of “Oh, oh, I’m humiliated!” really lands here. Check the “Stray Observations” below to check out the other one.

The girls are alone, and just about done with the order when it turns out that Max has lost an earring, presumably in the batter. This forces the two to start destroying the cupcakes to find them, and soon, with bits of baked goods underneath every fingernail, the two are throwing down over Max still talking to Andy and “girl code.”

The scene really stands out due to their argument, which holds a lot more emotional sincerity than most of the feel-good moments on the show. There’s screaming and cupcake throwing and on some level, in spite of the audience laughing and cheering, it feels strangely real, like the two actresses are actually upset at one another.

Anyway, Andy shows up to help and defuses the situation. Him and Caroline end up in the kitchen and talk about how they “glove” each other [why can’t we all use kitchen safety to properly express our feelings?] and while they don’t get back together they ultimately end up in a pretty good place. Another breakup takes place when Max and Andy talk, realizing that they should probably stop texting for Caroline’s sake.

Back at the apartment the girls realize that they had switched aprons, and that Max’s earring was in her apron [on Caroline] the entire time. This is really weird, because this discovery is caused by Max finding Caroline’s phone, which doesn’t jive with her texting with her own phone earlier. Anyway, it’s not really worth picking apart, just generally kind of clumsy on the writers’ parts.

The show ends with the usual ka-ching of the money counter, which I suppose now tallies up the profits from the cupcake shop, shooting up from $900 to $4900 due to their huge order. I’m not sure what they’re aiming for, or what their overheads are, but right now it doesn’t seem all that important to the show as a whole.

As a parting note, did anyone else feel like this episode had a lot of dated references? Sure, hipsters were also a topic sort of addressed in CBS’s other Monday sitcom, How I Met Your Mother, but Max also references James Cameron’s Avatar and the 2010 TLC series Sister Wives.

Tune in next week to read my reviews of a show The A.V. Club gave up on a long time ago!