It’s been almost 60 years since The Ten Commandments, and I want to say we’ve come a very long way since then. Again note that that’s something I want to say. To be truly and completely honest there is almost nothing I want more than to be able to write to you all and tell you that in six decades we are so, so far from the time when Charles Heston and Anne Baxter were cast as Moses and Nefertiti, respectively. You know what they say, though, you can’t always get what you want. 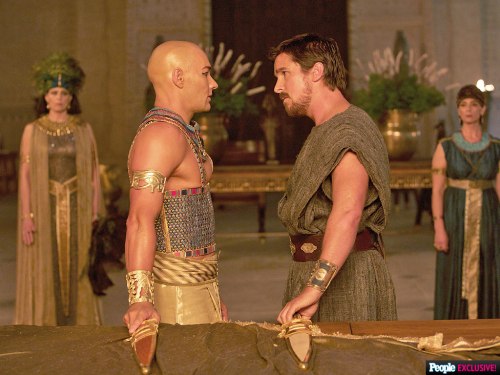 That picture above, ladies and gentlemen, is Joel Edgerton and Christian Bale as they will be appearing in the upcoming Exodus: Gods and Kings. I know what you’re thinking, and no, they are not playing European diplomats visiting ancient Egypt, the two actors are Ramses and Moses.

I can only assume that director Ridley Scott and any others involved in casting took a page from Ari Handel’s book, who co-screenwrote Noah with Darren Aronofsky. When asked about the decided lack of diversity in their film he responded with [emphasis mine]:

“From the beginning, we were concerned about casting, the issue of race. What we realized is that this story is functioning at the level of myth, and as a mythical story, the race of the individuals doesn’t matter. They’re supposed to be stand-ins for all people. Either you end up with a Bennetton ad or the crew of the Starship Enterprise.

You either try to put everything in there, which just calls attention to it, or you just say, ‘Let’s make that not a factor, because we’re trying to deal with everyman.’ Looking at this story through that kind of lens is the same as saying, ‘Would the ark float and is it big enough to get all the species in there?’ That’s irrelevant to the questions because the questions are operating on a different plane than that; they’re operating on the mythical plane.”

I think I do a pretty good job of steering away from Gordon’s usual brand of vitriol, refraining from posting gifs of various people flipping the bird, but this? Handel just straight-up told me that White people are “stand-ins for all people”, aka “the everyman”. The best thing I can say about him, and it’s not like I want to, is that he’s blatantly stating how so many people already view the world. 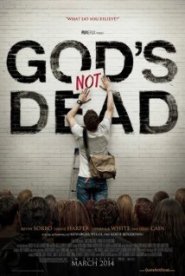 Or rather, how so many Westerners view the world. To bring this back around to the topic as I introduced it, the Christian community [particularly in the United States] is huge. They’re the reason God’s Not Dead, a film which was almost universally panned, garnered a box office of $62 million on a budget of less than 1/30 of that. Rest assured, the studios would not be greenlighting films like Noah and Exodus: Gods and Kings if they didn’t think they had the potential of tapping into that market.

Sure, flicks like Heaven Is for Real [another movie for that very specific audience] are great, but there’s nothing Christians like more than seeing stories that are important to them created by Hollywood. People are going to see Exodus: Gods and Kings because they want to see an epic movie about Moses, and no amount of convincing is going to keep them from it. I mean, it’s not like the whitewashing in the film is going so far as to actually alter one of the ancient Wonders of the World or . . .

Ah, I see. Well, at the very least this is a production that has provided acting opportunities to minority talent, even if it means they’re not in the lead roles . . .

This is pretty awful by almost anyone’s standards, but it borders on parody the more you take a look at the promotional images. I like Sigourney Weaver well enough, but Queen Tuya, let alone an Egyptian person, she ain’t-

It’s bad enough knowing that actors chose to become involved in this film without shuddering at what they were going to be asked to do, but it’s something else that so many Christians are going to be flocking to theatres all across America to watch them. Yes, those adherents of a religion that played a significant factor in the Civil Rights Movement in the United States are going to be taking up seats because on some level they believe this is being made for them.

What I’m calling shame down upon is a blind, zombie-like support for what I’m going to dub “utter garbage”. It’s eating up what’s been presented to you because God forbid we have standards of quality for what we’ll accept, give us anything. 1 Corinthians 8:13 says: “therefore, if what I eat causes my brother or sister to fall into sin, I will never eat meat again, so that I will not cause them to fall” which essentially boils down to “I won’t do what might offend other people because I am considerate and care about them.” NEWSFLASH: when you pay money to watch a movie that whitewashes minorities you are greasing the wheels of a system that directly affects the self-esteem of non-White people.

It’s being compliant and accepting of the idea that thousands of years ago the Middle East was populated by the people with the same skin tone as Joel Edgerton. There has to be a refusal to let it bother you that all of the darker men and women in this film are, among other things, thieves, assassins, and lower class citizens. That’s not just silly, it’s the sort of thing you shouldn’t accept in the year 2014.

Consider this a matter of beliefs. Watching Exodus: Gods and Kings fuels the belief that White people are are “the everyman” and can be cast in any role, a practice that deprives minorities both work and the chance to see themselves in the media. Not watching Exodus: Gods and Kings affects your belief in the Old Testament in the stories not at all.

Don’t watch this movie. Do yourself [and more importantly, others] a favour and look around for a copy of a certain 1998 animated feature instead. The list of reasons you’ll find by clicking below are all the convincing you should need- 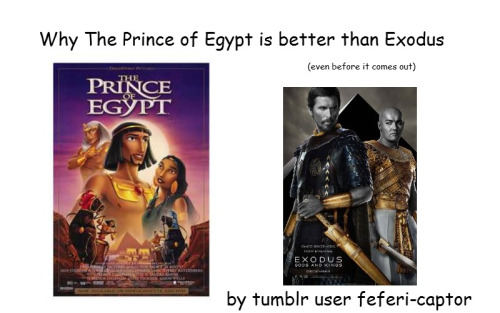 Clicking the image will lead you to an entire powerpoint of sorts, and while only seven slides long it is very effective.

13 responses to “Shame Day: Whitewashed Bible Movies and the Christians Who Watch Them”