Welcome again readers, to Culture War Reporter’s second installment of “Explaining American Politics to Non-Americans” [Part 1 here], in which yours truly attempts to explain the chaotic carnival that is our great democracy.

This week, we’ll be looking at the Republican party. Or parties, if things keep progressing as they do.

But let’s dive right in.

I won’t pretend I don’t have my own bias but I will try to be as fair as possible.

To say that the “Grand Old Party” has made itself unpopular abroad would be an understatement. The Bush-era wars, sanctions, and seemingly indiscriminate use of military force has created an international image of Republicans as blood-thirsty imperialists. While Obama has been far more liberal (pardon the pun) use of drone strikes, others point to the Republicans shaky relationship with environmentalism, science, and women’s issues to cast the GOP as backwards and puritanical.

But how fair are these assertions? If they’re true, where do they come from?

The “Grand Old Party”, as it was once called was established in 1854, just prior to the American Civil War. Evolving from a number of groups, the Republican party came to stand largely for federal power and industrialization, contrasting with the emphasis on state’s rights and agriculture that the Democrats had (who we’ll get to next week). Indeed, while now struggling now to rid themselves of the accusation of being an “old, white guys’ party”, the Republicans of old were actually the more progressive, liberal and inclusive of the two parties. Although racism would remain an issue across the political spectrum, it was Republicans who could often count on the African-American voter demographic throughout much of the late 1800s.

Exactly when and why that stopped being the case is still a matter of heated debate.

Some would cite that the “Red Scares” (anti-communist witch hunts) of the 1950s pushed the party increasingly towards aggression, militarism, and social conservatism. Others might argue that as issues of civil rights, poverty, and the war in Vietnam caused many African-Americans to shift towards the Democrats, leaving the party almost exclusively in the hands of the white tycoons.

In spite of this shift, Republicans nevertheless have consistently managed to gain and often dominate American politics, the Reagan-era in the 1980s seeing massive cuts to government spending while increasing intervention in Latin America, the Middle East, and Afghanistan. The short-lived presidency of H.W. Bush, however, would see the abrupt end to the Republican Golden Age, with economic downturn and issues from within the party leading to Democrat victories in the 90s.

Taking power after a bitterly contested and to-this-day controversial election, Bush nevertheless gained popular support as a “wartime president” following the attacks of 9/11. The increasingly Orwellian security measures rolled out by the administration, including the wildly unpopular Iraq war, the Patriot Act, torture, and the authorization of the indefinite detention of Americans believed to be associated with terrorism led to the characterization of Bush as a warmongering despot.

Combined with revelations of the false justifications for the Iraq war, the devastation of Hurricane Katrina, frequent gaffs, and the economic collapse of 2008, Bush’s approval ratings dropped as low as 19%. Many were left to wonder if the Republican party hadn’t impaled itself on its own bayonets, and if a recovery could ever be possible.

And as we shall see in a moment, there’s a good chance that it hasn’t.

Originally arising as conservative protests against the perceived fiscal irresponsibility of the Obama Administration, these gatherings quickly became a vehicle for a wide number of right-wing complaints, extending to including immigration, healthcare reform, the role of religion, and much more. In spite of critics’ arguments that the Tea Party movement was largely manufactured by wealthy, corporate interests (the Koch Brothers being the villains most often cited here), the grassroots element of the drive cannot be discounted.

Regardless of origin, the Tea Party movement (at it’s outset, at least) seemed to Republicans like a godsend- a much needed revitalization of conservatives after their massive loss to the Democrats in 2008.

But as the old story goes, a demon summoned up is not so easily put back down, and the very group that helped restore the balance of the Republicans now threatened to tear apart the party from within.

While the Tea Partiers have tended to view themselves as “reclaiming” a party crippled by institutionalism and compromise, others have worried that this vocal minority has hijacked the establishment; installing a hopelessly extreme agenda and purging moderates from the rank and file.

A silent yet vicious war has taken place behind closed doors, with establishment and hardline politicians and members desperately vying for control of the party. It would appear that hopes for unity are being placed now in the election of a new Republican president, able to channel both factions’ energy in a single direction and restore order.

But that’s just not going to happen.

That comment was directed towards the then-raging civil war, in which Northern and Southern states battled in one of the bloodiest and costliest conflicts in American history. That mentality, however, seems to have been adopted as a unwritten law. The idea that “Republicans don’t vote against republicans” has been a mainstay in American politics, Republicans typically viewed as less likely to cross party lines, regardless of the issue at hand. This sense of party discipline has been used repeatedly by the Republicans (who are currently at a mere 25% of the population) to consistently route their larger Democratic rivals in both local and national elections.

Or at least, that was the case.

The past years have seen increasingly vicious competition between establishment and radical candidates, as well as the slow fracturing the party as a whole. Why? Well, just look back at the party’s history.

The Republican Party was founded by the merger of two major groups: Industrialists and Abolitionist Christians, both reacting against the use of slavery, agriculture, and rural life in the South. In following years, Capitalism and the Church would find themselves united again in their response to the threat of Socialism in the US and the eventual rise of the USSR abroad. Godlessness and Marxism kept both the social and fiscal conservatives in lockstep with each other for much of the 20th century. But with the fall of the Wall and the loss of their common enemy, both sides have seen themselves grow increasingly distant from each other. Worse, both fiscal and social conservatives see themselves as being the true heirs to the Republican legacy. Indeed, the role of the church in the Republican party has even been called a “marriage of convenience” by influential right-wing author Andrew Sullivan. Conservative Christians, alternatively, have accused Republican politicians of “abandoning” such key issues as combating abortion and same-sex marriage.

And these are fundamental difference we’re talking about here- nothing that’s going to go away with political power. Just the opposite.

Take, for example, a local convenience store stocking pornographic magazines. The socially conservative republican would be horrified- demanding a boycott or perhaps even legislation against this sort of thing. The fiscal conservative would contrastingly argue that the store owner is simply exercising his right in addressing the demands of the market, and to regulate him would be tantamount to murder.

So this is basically the Republic party right now. The yellow guy is the Libertarian, though if this GIF were more accurate, he’d just be getting the **** kicked out of him by both sides.

What the Republican party would seem to need is the emergence of another common enemy, capable of uniting its many factions, but such an enemy has failed to materialize- even in the form of Al Qaeda and the self-titled Islamic State. 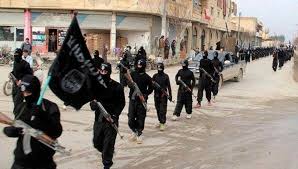 Largely because the IS is too busy murdering other Muslims

Right now, the ever-combatant Republicans have no one to fight but each other, and the term RINO (“Republican In Name Only”) is being batted around like never before. The only way the party is going to be able to survive is to evolve. But in which direction?

It’s possible that the social conservatives will attempt to wrest control, and perhaps even influence the party to endorsing an openly religious agenda.

And with such a substantial number of republicans hailing from religious backgrounds or citing social issues as their chief concerns, that’s not unthinkable. It is, however, untenable.

I mean, what would happen to the Mormons?

(Those would be the red dots you’re seeing)

While the Mormon population of this country tends to be more conservative, Mormons are still viewed by most Protestants as non-Christians, if not outright heretics. Same principle extends to Catholics, who often get snubbed by their Protestant brethren as deceived. Calvinists and Arminians can’t stand to share pews, how are they going to split a whole country?

Or the shift of power very well might swing towards the fiscal side of things. That’s certainly not beyond imagination, especially with the financial crisis of 2008 continuing to drag miserably on. And while that might be appealing to plenty of folks who still believe in the free-market dream, the domination of the party by massive corporations is probably going to dry up support among small-business owners.

And while it’s probably just a Libertarian pipe-dream, the party could shift it’s roles back to its more individual-freedom/Capital-L-Liberal roots. With the Democrats becoming more and more cozy on the throne that Bush made, it’s not inconceivable that the Republicans might try to make defending the rights of the individual more than just empty rhetoric.

Not inconceivable, but still not likely.

Who knows? With the primaries rapidly approaching and the public immensely underwhelmed by their prospective candidates, maybe the mighty elephant is coming down at last.

Not that we’ll be complaining.