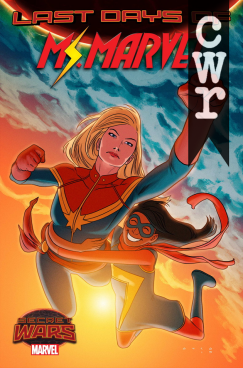 I’ve been waiting for this issue to come around since Ms. Marvel first hit local comic book stores roughly two years ago. Kamala Khan fights crime under the moniker that once belongs to Carol Danvers, and idolizes her to the point that the first ever usage of her powers was actually to transform into the blonde, blue-eyed superwoman. While she’s since realized a lot about her own identity as a hero [and as a person] the fateful meeting between the two is nonetheless a momentous event.

If only it wasn’t being overshadowed by, well, the end of the world.

That’s not to say that it’s being poorly handled, only that this isn’t the way many imagined the two would see each other face to face for the first time. Kamala sees Carol at what is hands-down the lowest point of her short career in vigilanteism. The world is, as mentioned, ending, but more importantly to her Jersey City is in danger. That’s only compounded by the fact that her brother has been kidnapped by her “ex-crush” AKA Kamran. And you thought your teen years were overwhelming.

She first spots Captain Marvel in the monochromatic costume she can first be seen wearing in Avengers #35, published last November. For anyone wondering why her look differs so much from the cover to this issue . . . Long story short, this was when Danvers was part of S.H.I.E.L.D.’s Avengers during a time when the Earth’s Mightiest Heroes were split into multiple factions, with one striving to prevent the apocalypse in secret, another trying to apprehend the first, a third with the aim of bringing everyone under one banner . . . 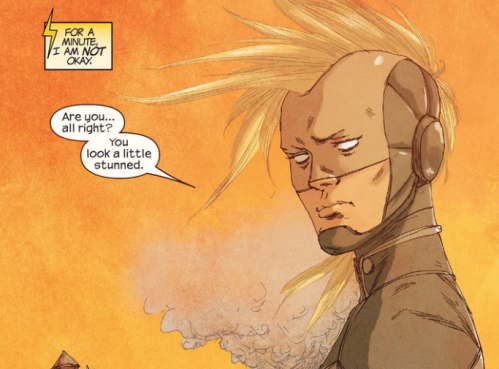 It’s a complete narrative that you would need to read two separate titles to fully understand [Avengers and New Avengers] and that was told over the span of a few years. And that’s why Captain Marvel is in grey! The more you know.

Carol agrees to stick around and help Kamala for one hour before jetting to New York. While there’s a brief detour with the vandals who were chased off by Loki’s ward of protection, the moments to really pay close attention to are when Ms. Marvel gets to learn about heroism from Captain Marvel in person.

Wolverine taught her that more often that not in order to help people you have to hurt people and that a secret identity hurts those you keep it from, but the lesson that Danvers delivers is a different one. On their way to rescue her brother they come across a bunch of abandoned kittens. Concerned for their well-being Kamala picks one up asking if they can somehow take them along the way even though she already knows the answer-

“You don’t want to pick and choose. You want to save everybody.”

You can’t save everybody. You can only stretch yourself so far, and you need to remember to take care of yourself. On the surface it looks like generic, run-of-the-mill advice, but when viewed in context it’s a minor issue that reveals a larger problem. Saving Aamir means leaving Cole Academic High School and her friends and parents behind for a while. Carol’s words are meant for her just as much as they are for the teenage girl, she can set aside an hour to help but the rest of the Avengers need her to try to save the world. 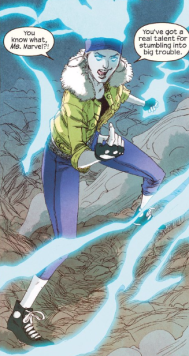 What proceeds is a minor scuffle with Kaboom, who I still think should’ve been named “Kilowatt”, drawn beautifully here for the first time by Adrian Alphona. The way her design translates so beautifully between artists is evidence of a solid character design, and it made me wonder how large of a presence she’ll have going forward in Ms. Marvel. Anyway, that’s not the point-

The point is that Marvels Ms. and Captain find Aamir unconscious and floating, seemingly by his own power, amidst a cloud of Terrigen Mist. What this means is seemingly obvious, but not what it could mean for her adventures moving forward. What sort of powers will her brother manifest, and what will he use them for? Lineage and the rest of the Inhuman villains are eager to conscript him, but will he be so easily swayed?

Contrary to what I said in my last review the final issue of Ms. Marvel Vol. 3 will actually be #19, after which a new Issue #1 will be hitting stands as a brand new jumping on point. Ms. Marvel is dead, long live Ms. Marvel!

The Ms. Marvel Visual Gag You Shouldn’t Have Missed: There were a lot of really fantastic ones in this issue, particularly in the panels where Ms. Marvel and Captain Marvel leap and fly, respectively, over the city. With that in mind I decided to keep this one pretty low-key and spotlight the cat food that was left behind. Nermal is, of course, Garfield’s adorable nemesis from the popular comic strip by Jim Davis. The food is also “Great 4 Kids!” which is a big plus. 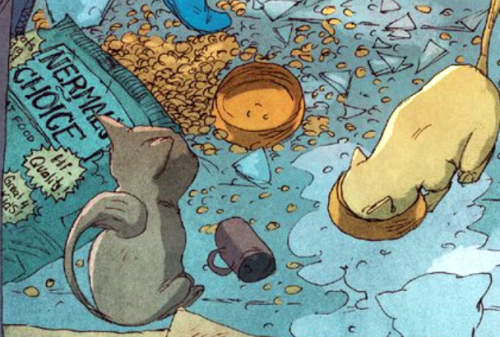