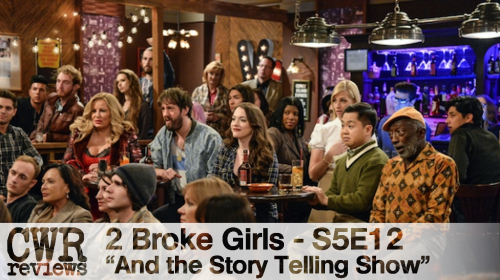 Midway through its fifth season and 2 Broke Girls has finally done it; Max and Caroline, and consequently the show itself, now have a brand new direction. Ever since Season 4 ended with them remembering their dream of owning and running their own cupcake business things have been pretty shaky, narratively. For the most part the two girls have just been killing time, not even really trying to make any extra money.

The best part about the apparent arc they’re going to be starting on come next week’s episode is how far out of left field it is. It doesn’t have anything to do with raising a certain amount of money and isn’t connected to their cupcake business at all. No, this is a fresh, surprising take, and one I’ll get to after I go through the usual recap.

Just this past month I saw through Facebook that a friend of mine was attending an event called “Grownups Read Things They Wrote as Kids Toronto” which is, after further research, exactly what it sounds like. Upon mentioning it to yet another friend they recommended the documentary Mortified Nation [which you can find on Netflix] which is essentially the same thing on a much larger scale. It was the first I had ever heard about this deeply personal form of entertainment, though to be fair I haven’t heard of most things.

Mortified Nation came out in 2013, so it’s no real surprise that 2 Broke Girls began to tap into this particular brand of live performance [especially taking into consideration how long it took them to cover escape rooms]. That being said, it actually leads to some of the most entertaining moments of this episode.

It all begins with Caroline being asked out to see a “storytelling show” where men and women share their childhood experiences to an audience. Her date, Adam [Miles Fisher] is the first performer we get to see, and he is, well-

“Rachel Mooney, a popular girl, pulled down my pants. That’s right, I got dance-pantsed!”

-he’s bad and he should feel bad. Max ends up tagging along, which sets the two of them back $40. When Adam ends up flaking on the rest of their date, ostensibly only asking her out to put more bodies in seats for his part of the show, Max begins recounting how much more terrible Caroline’s life is when the emcee tunes in and asks that she share her life story.

After the woman before her wraps up her story-

“And, after it was all said and done, I looked at my vagina. And my vagina looked at me. And we shared a knowing glance. It was as if she was giving me permission to tell her story.”

-while also allowing us a beautiful panning shot that exhibits the entire cast’s reactions, it’s time for Caroline to take the stage. It’s here where the extremely small conflict presents itself. Due to the young Ms. Channing living such a truly horrific life [it’s not that bad, but anyway] her story is a gigantic bummer. Max helps her lighten the whole piece by interspersing jokes, and standing behind the mic Caroline has to decided whether or not to include them.

There’s a brief moment, pre-cringe, when you think she’s actually going to use her roommate’s material, but thankfully it never happens. While her attempting comedy and ultimately bombing this show may have had more entertainment value, 2 Broke Girls ultimately opts for a more sincere and genuinely touching moment, which is actually a move I can’t fault them for. The writers’ room has gotten a lot of comedic mileage out of Beth Behrs’ ability to botch anything to great effect, but here they allow Caroline to have a win for once. 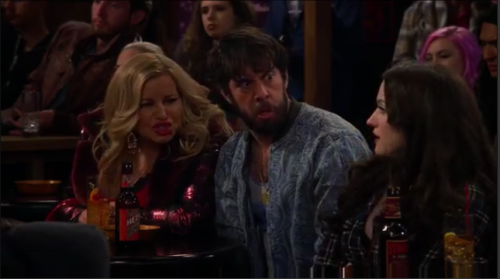 While it’s expected that the live audience be moved by her tale, the rest of the cast is likewise impressed. Not only that, but so is Nina Spiegel, a studio exec for Warner Bros. who believes that her story could actually become a feature length film.

Max helping Caroline with her story, and perhaps even wanting to be a part of her performance, never ends up being addressed well. That said, when Caroline is to be flown out to Hollywood in first class she trades in her ticket for two in coach, asking her best friend to join her. Just because they couldn’t tell a story together doesn’t mean that they’re not going to try to keep moving through life side by side. It’s a really exciting turn of events, and even if the end up back in the Williamsburg Diner by the end of next week’s episode they’ll still have been offered another opportunity at success. Things will have changed for them, and will hopefully affect the rest of this season.

As for Sophie and Oleg, due to not being able to conceive [not for lack of trying] and failing to find a suitable surrogate mother for a paltry $200, they’ve decided to adopt. It’s been legitimately interesting watching their attempts to become parents, and having them turn to this option is another pleasant surprise.

New Total: $390. $40 for both of them at their first show, with Caroline earning $50 for her performance, accounts for the $10 bump. What it doesn’t take into account, however, are the drinks they had. Though maybe those were included with the price of entry, which I sort of doubt given the kind of gig it was.

The Title Refers To: Storytelling shows. They’re all the rage now, really.