My Problem With Ghost in the Shell (In A Nutshell)

I don’t think there’s anyone here who’s unfamiliar with the term “whitewashing” at this point.

It’s been a frequent topic of conversation here on Culture War Reporters, and while certainly not a new issue, it has been gaining wider and wider attention in recent years…

Most recently, the problem reared its ugly head in the form of Scarlett Johannson being cast in the live-action remake of anime classic Ghost In A Shell. Once again we’re seeing a traditionally non-white (in this specific case, Japanese) role being given to a white actor out of fear that audiences won’t watch movies with non-white leads. And if that were the only issue, I might have stuck with my usually political tirades and left this topic alone. But in the past few days, a shocking development has emerged in the story. Allegations have surfaced that the remake’s producers (and I quote) “Tested Visual Effects That Would Make White Actors Appear Asian“.

Or, as my best friend and this blog’s editor recently put it on Facebook:

“We think so little of you that we’d consider changing a White person’s appearance before entertaining the thought of casting an actual Asian.”

So yeah, I’m feeling compelled to write about this…

And let me tell you what really convinced me to submit the following rant.

It was Sunday morning, with yours truly browsing Imgur, when I came across a reference to this scandal. And by “reference”, I mean “a lengthy attempt to justify the whitewashing in Ghost in the Shell“.

Seriously, an attempt at justification.

Not the lazy, half-apologetic attempt to deny whitewashing. An actual, barefaced argument in favor of whitewashing.

We live in a demented world, after all.

-Y’know what? Read it for yourself. 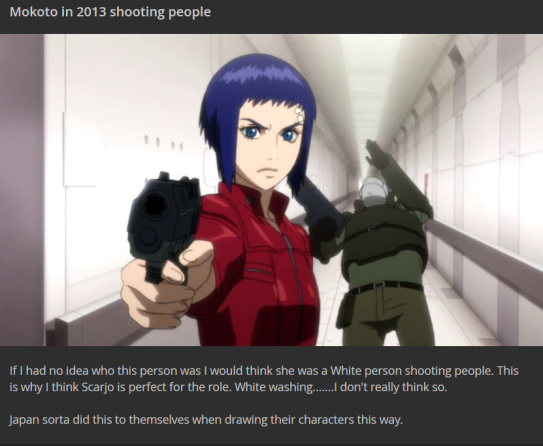 That’s right! It’s not us being racist- it’s Japan’s fault for not drawing their characters Japanesey enough! 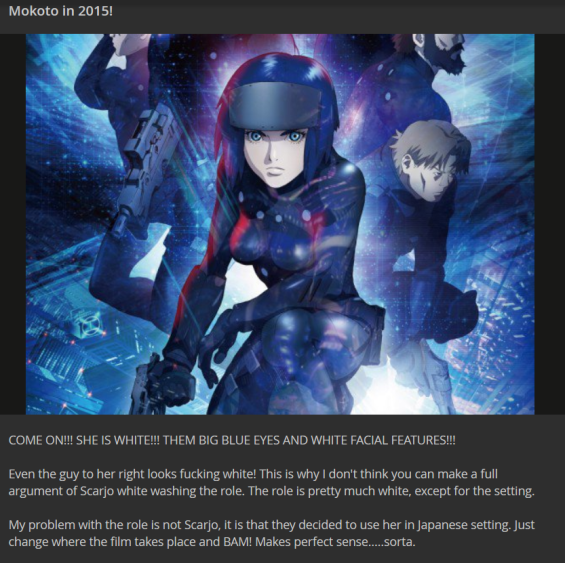 Have you ever wanted to have a role so bad that you told the creators what they really meant?

I **** you not, that’s an actual argument someone made, and which was apparently popular enough to reach the front page on Imgur- which is saying something. Seriously- the crux of the argument is that a Japanese anime dealing with a very specific period in Japanese history and the Japanese national psyche written in Japanese and presented first for a Japanese audience didn’t have any Japanese characters in it. 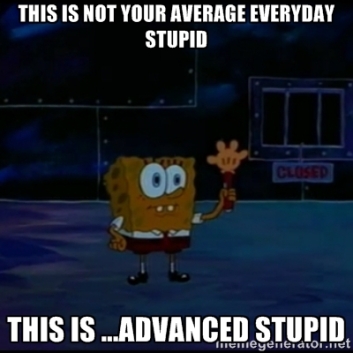 Because, according to the author, the character is drawn “white”- and let’s start things off right there.

First, it’s a cartoon. You can draw things with a certain degree of artistic liberty- it’s one of the greatest conveniences of the medium. Would you expect a live action remake of The Simpsons to only have actors with jaundice? 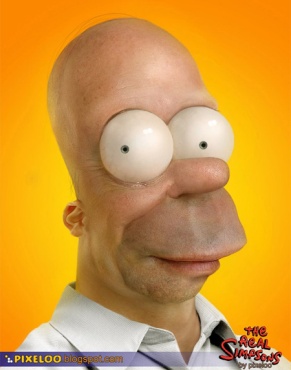 I don’t want to put a picture of someone with jaundice, so here’s an different kind of horrifying instead

I’m not sure how it happened, but Westerners have gotten it into their heads that they are the only fair-skinned people in the world.

Look at how Arabs are portrayed: 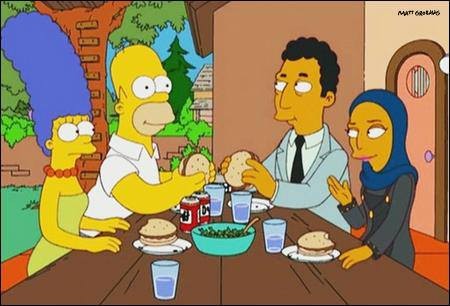 By the way- imagine how crazy people would go if Homer and Marge were portrayed by a couple Asian actors in real life.

Consistently they’re presented in cartoons as having dark skin. In television and movies, many folks would rather hire Indian actors than Arabs, because Arabs don’t match their own stereotype. 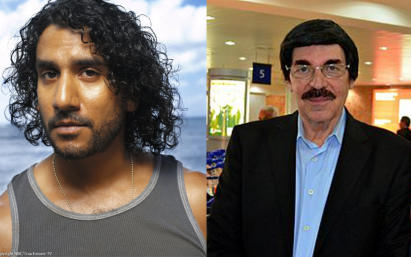 Let me show you what a lot of Middle Easterners actually look like: 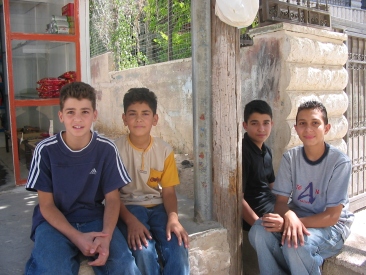 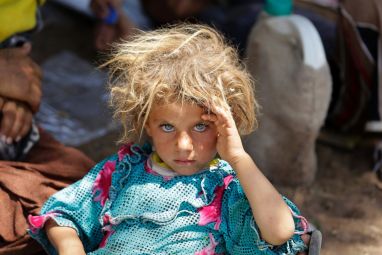 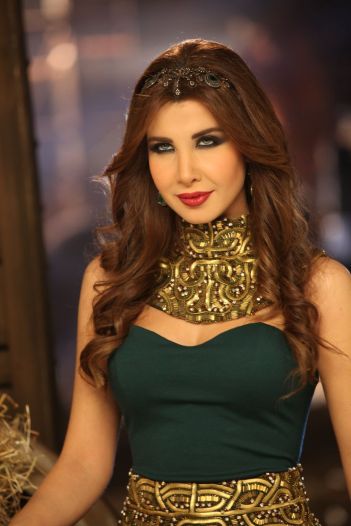 Probably not what pops into your head when you think of Arabs. For ****’s sake, even the folks who are the supposed bastion of cultural appropriateness can’t seem to get it right: 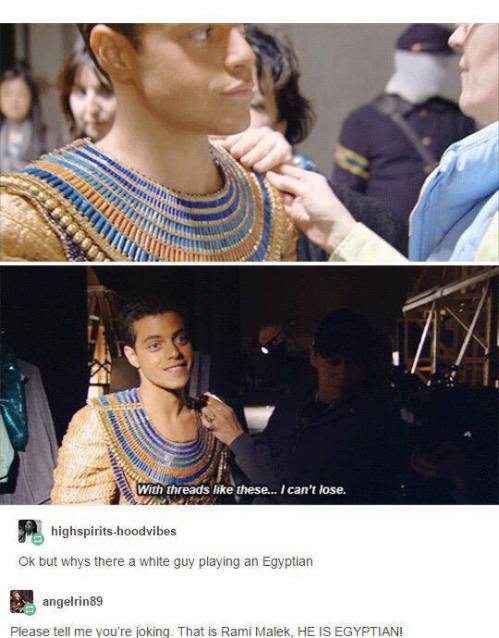 Think about for a second.

Think about how insane you sound.

“You can’t be Asian, your skin’s too fair. And there are rules about this kinda thing, apparently.”

But that is the issue.

The pathetic attempts at justifying whitewashing are pretty diverse (often more so than the movies), but this– this is just plain ugly. It’s more than just appropriation, it’s a colonization. It’s creating an image of what other people are and then penalizing ’em when they don’t match your ****ed up stereotypes.

Arabs are dark and wear turbans!

Let’s make a movie with Arabs in it!

Uh- ok. Here’s a bunch of Arab actors who’d be perfect for the part.

These guys? Where’s the dark complexion and the turbans?

Again- lots of Arabs are relatively fair and they don’t wear turbans.

What? Nonsense! Of course they do! I’ve seen it in all the movies!

Let’s say that you’re living in Japan, and a Japanese film studio has decided to remake American classic The Adventures of Huckleberry Finn. Only instead of it being set in the antebellum American south, it’s going to take place on the outskirts of Tokyo. Sure, removing the story from its context absolutely destroys any meaning it has, but hey- it is what it is.

So the casting call goes out. Someone needs to play Huck Finn and you, being an American from the American south, figures that this is finally your chance for a major role. Only when you get to the audition, you’re turned away. You don’t look “white enough”, they say.

“What’s that mean?” you reply.

“It means what it means,” they reply, showing you this picture. 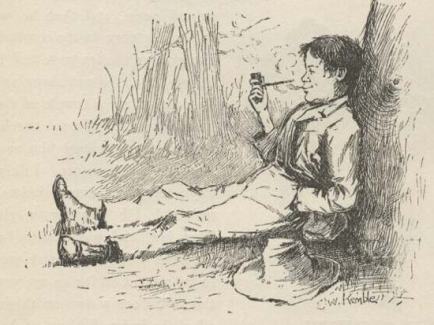 Image retrieved via Britannica.com, fair use.

“See?” They say, “In this picture, Huck has absolutely white skin. And you clearly are a little darker than that.”

Rightfully perplexed, you suggest that the reason Huck Finn has such white skin is that it was a stylistic choice on the part of the artist. Also, because it’s a black and white picture- but they aren’t having it.

“Obviously Huck Finn as a character wasn’t a Caucasian American.”, they say.

“Are you serious? The main character of a book largely addressing a serious race issue wasn’t a white American?”

“Did the author ever actually establish that Huck Finn was white?”

“We’ll… we don’t remember that. Anyways, Huck Finn is suuuuuuper white, and you just don’t match the part.

Now that you mention it, we can’t think of anyone who perfectly matches the preconceived identity we’re placing upon the part.” 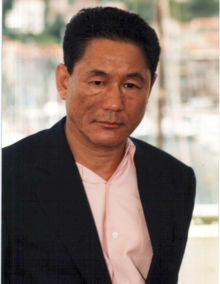 Fun Fact: Takeshi Kitano will also be in upcoming travesty Ghost in a Shell. Because we can get Japanese actors- just not for lead roles, apparently.

“-Don’t worry, we’re going to use CGI to make him look American. Well, the way Americans are supposed to look. And we’re paying him an estimated $10,000,000 dollars– because we would rather pay a ****ing fortune than even consider giving the part to a non-Asian.”

“Look, we’d love to cast the part authentically. It’s a great story with universal themes- something we imagine our audience will really be able to get behind, regardless of its origin.”

“No way- our audience isn’t going to be able to handle a non-Asian lead. They’d have no way to relate. Thank God Mark Twain didn’t write the book with an American protagonist in mind.”

Doesn’t feel so good, does it?