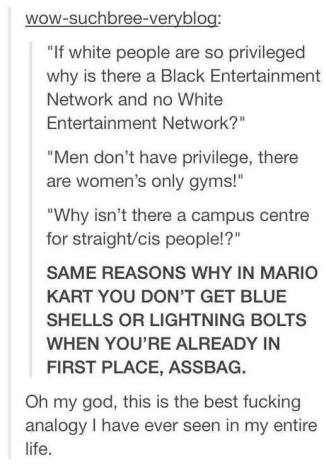 Make no mistake – the implicit message here is that things like women-only gyms and the BET network are consolation prizes. Bonuses apologetically handed down by the enlightened, sympathetic elite. Not what they truly are – the results of decades of grassroots activism and struggle by the very groups who created ’em. Black folks and gay folks and women have these things because they fought for them, not because they’re “allowed” to have them.

We clear on that?

Stow your horrified gasps people – hear me out a second.

Again, there might be folks who’d be tempted to claim that it’s because they’re minorities. Because they need to have these “blue shells and lightning bolts” to compete. Because they’re allowed to have such things in the interest of “fairness”. And to give White people the same things wouldn’t be “fair”.

But of course, that’s still just the same patronizing racism and prejudice wearing the mask of inclusivity. The real reason we have groups like this is because there exist unique challenges, histories, and issues facing these groups in the US. These unique groups attempt to grapple with the unique issues of whoever they represent – be it folks studying the intricate and lengthy history, culture, and politics that arose from the Black experience in America or the continued effort for positive representation in the Asian-American community.

So why not White folks?

“Because White people neither have been nor are presently oppressed!”

But that’s not historically accurate, now is it?

Well, you might have heard of the Armenian genocide…

…Or the Holocaust, which saw millions of Jews slaughtered by their fellow Europeans… 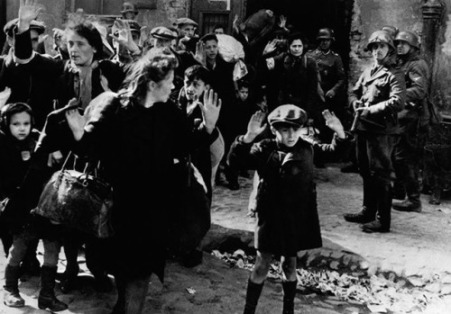 The same goes for the Roma, who continue to face persecution to this day. Hell, even the term “gypped” is fundamentally a racial slur and the only portrayal a Roma is likely to get is as a wizened old fortune teller.

…And let’s not forget Bosnia… 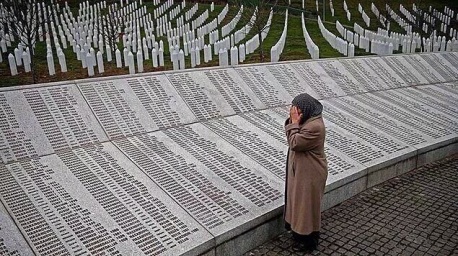 And what both liberals and White supremacists alike seem to forget is that there are groups out there dedicated to obtaining justice on behalf of their respective backgrounds. The National Italian American Foundation, the Polish American Congress, the Ancient Order of Hiberians, the Armenian National Committee of America – just to name a few.

“But those are all old examples. Anti-immigrant sentiment (against Europeans, at least) is nowhere near what it was at the turn of the last century, and most people aren’t treating Catholics like subversive agents of the papacy! And sure, there was the whole Srebrenica thing, but that was over twenty years ago!”

I’m going to debate some of that, but I don’t think it’s the point, which is that these “blue shells and lightning bolts” both do exist for White people and should exist. It’s almost like people have the right to unite and organize over a shared cause or grievance. And I’m going to take things a step further and say that there oughta be more.

Until comparatively recently, the Appalachian region of the US was so impoverished that many have likened it to a third-world country. While conditions have marginally improved for these folks, they continue to struggle. Coal mining is one of the largest employers in the region, but it’s incredibly environmentally destructive and cited as the root cause of the obscene cancer rates among the locals. Allegany County, located at the northern end of the range, is one of the single poorest communities in New York. Back in the late eighties, the county was selected to be the site of a nuclear dump, and it was only after a hard-fought, grassroots battle that the people of Allegany kept nuclear waste from being dumped in their woods. These same people would find themselves coming together again in recent years to combat fracking.

This, of course, is just a single instance of a much wider problem. For decades upon decades, rural (and overwhelmingly White) Americans have continually received the short end of the stick.  Despite having largely voted for Trump, the present administration has been even more brutal in butchering the last pieces of infrastructure left to these folks.

Appalachia: Come for the astonishing beauty, stay because the rural airports had their funding eliminated.

Look – I’m not going to stand here and pretend that I have the authority to declare the inhabitants of Appalachia a “race” (that word being essentially useless to begin with), but what I can tell you is that, regardless of the complexity, an identity has been foisted upon the rural, White inhabitants of the South and Midwest. A distinct “otherness” meant to distinguish “us” from “them”.

“It’s funny because prom dresses aren’t supposed to be camo print. Don’t ask me where that rule is, just take my word for it and laugh.”

Let’s look at the characterization of these folks.

While the popular series The Beverly Hillbillies might’ve been affectionate with their titular characters, it never missed an opportunity to show how backwards, uneducated, and superstitious – ever quick to turn convent the mansion’s pool into a still or brandish a shotgun at the mailman.

Same goes for the Darling family in the Andy Griffith Show.

And that’s been at least addressed in shows like It’s Always Sunny In Philadelphia, with lines like:

• “No, Frank. They are always armed to the teeth. They will hogtie us and hang us out on the front lawn or burn us on a cross!”

• “You’re right, man. You got to be careful. You know, anytime you find out, like, some dude’s got a crazy torture basement or something, it’s someone from the South. It always is.”

To say nothing of their resident inbred Appalachians, the McPoyle family…

Which is rough because the McPoyles are some of my favorite B characters.

…Or even Cletus, the slack-jawed yokel of The Simpsons.

You can see how it starts adding up, right?

“Again – how is that racist? It’s messed up, sure, but what’s any of this got to do with ‘Whiteness’ or whatever? Budget cuts to rural America can hardly be classified as racist in origin…”

I’m not so sure about that.

“Classism!” you may cry, “Not racism! Classism!”

But racism and classisms are inextricably linked. Classism, continually focused on the same impoverished, disenfranchised groups, eventually festers into a simple, unquestioning fear and disdain, and if the examples above aren’t enough, I’ve got plenty more.

We have a website called “People of Wal-Mart” where folks can post pictures of dirt-poor people who look “freakish”.

Just this year we had Meryl Streep speak at the Golden Globes, loftily declaring “Hollywood is crawling with outsiders and foreigners. If you kick ’em all out, you’ll have nothing to watch but football and mixed martial arts, which are not the arts.”

And it’s hard not to take that as a snooty swipe at this country’s rural, White population – the “NASCAR-loving, gun-toting bumpkins who can’t tell a Monet from a Manet.” 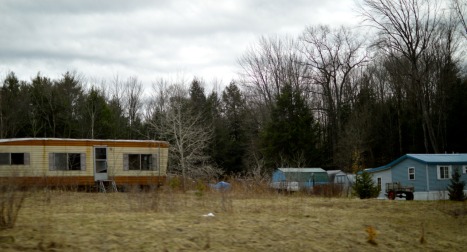 “I’ll bet they don’t even have an opera house…”

Far from being defended by the self-declared champions of equality and tolerance, rural White Americans seem to have their issues routinely ignored and their very existences looked upon with derision and contempt.

There’s this one comedian who I think does a great job of saying it:

“I tour the South, though, I do. I love touring the South. Some people up North are afraid of the South, it’s weird. I’ll do a show in, like, Alabama. I’ll tell someone I did a show in Alabama and they’ll be like, “Oh my God! What was that like?” Oh, you know, chairs, a microphone. Oh, I’m sorry, I know what you’re looking for. I’ll tell you what it was like. Well, I flew into Birmingham. The Imperial Wizard from the Klan picked me up at the airport. Rode to the club on the back of an old mule. Tried to get a joke out over the shouts of “jewboy go home.” At the end of the night I go “Where’s my check?” They go, “You’re not gettin’ a check. You’re gettin’ this bag of porkrinds.” Is that the answer you were looking for, you narrow-minded fake-liberal fuck?”

I don’t think there can be any denial at this point that there exists within this country a sizable, distinct underclass historically and routinely targeted by the powers at be for being a distinct underclass. For being “White trash”. “Hillbilly”. “Redneck”.

Which isn’t to say these folks are all saints.

There is undeniable racism within these communities. There’s no shortage of crime, violence, and drug abuse. But I’m not of the belief that people have to be pure and blameless to deserve to be treated as people, not some voting block for conservatives to exploit for for liberals to ignore.

Now is the discrimination directed at these folks the same as the discrimination directed towards Arabs or Muslims or gay folks? I’d venture to say it isn’t. Have the White people of rural America had to fear lynchings? Not so much, no. Do White folks – even poor, rural White folks – still often enjoy the softer side of a double standard? Absolutely.

But I don’t believe the implication of that picture up above. I don’t believe there’s a finite amount of justice, and not enough to go around. “Death by coal mine cancer” or “death by inadequate rural medical care” is still death, and it’s still unfair. I would defy anyone to challenge the rights of these people to get together and organization for the improvement of their condition.

But we still feel uncomfortable about it.

And you’re not incorrect, oh imaginary strawman. That is something these dense ****wits don’t get.

In spite of the whiny complaints of White nationalists like Richard “the-human-punching-bag” Spencer, “White power” and “White pride” are simply calls to reinstate segregation, Jim Crow laws, and White supremacy. They are calls for benefiting White people at the expense and exclusion of all others.

The answer is still “yes”.

Which is made even more ridiculous and vile by the fact that it was White supremacists who historically attacked the Irish, the Italian, the Polish, the Germans, and Scandinavians.

I’m not saying Gangs of New York was historically accurate, but it did showcase the bizarre racist hatred so many immigrants experienced.

But we still need equality and justice for all, and that’s never going to happen so long as we have this absurd “all-White-people-are-the-same-and-we’re-all-in-first-place” mentality.

Join us next time for our third and final installment as we explore the strange issue of Whiteness.

It’s gonna be a weird one.

All images retrieved via Tumblr – fair use.