GORDON: Moved by your incessant letters, as well as tearful pleas from more than one head of state, yours truly has returned for this and only this installment of Evan and Gordon Talk

EVAN: Truly, you are too gracious. [Also, we cater to an international readership].

This week the two of us will be discussing men and manliness [or masculinity]. Which makes perfect sense since we are, after all, men.

GORDON: MANLY men. We once made an axe using nothing but things we found in the woods. On the very same day, we built a grave for a drowned beaver.

EVAN: He is not lying. But, moving forward, one of the reasons I brought up this topic is because it’s loaded with possibilities. There’s the idea of the, for lack of a better term, the “Barney Stinson,” the fratbro who watches Spike TV day in and day and out, and this recent ad that appeared in The Times of India due to the gang-rape and murder of a 23-year-old woman [click on the image to visit an article on it].

GORDON: Well, let’s narrow down some the of core qualities that make a man a man. Or at least, commonalities in all cultures and subcultures of what “manliness” is.

EVAN: How about- the ability to provide for one’s family.

GORDON: We’ll take it. Ability to defend oneself, with either words or deeds?

EVAN: I think we could expand that to simply being physically able. Physicality means both being able to defend oneself and loved ones as well as attack others for whatever reason you might have.

GORDON: Assertiveness- that’s it. Not taking guff from any of these swine.

EVAN: Who exactly “these swine” are aside, I’d also like to suggest that, in essentially every culture out there, manliness is directly associated with heterosexuality.

GORDON: The Spartans, actually, were unbelievably gay. Heck, the entire basis of western civilization is pretty gay. I want to strike that one from the record; highly sexual would probably be a better statement.

EVAN: I’m gonna have to stick by it. The majority of cultures out there use the term homosexual derogatorily, I think it’s hard to look past it.

EVAN: That sounds pretty good to me. Want to total them up? Really just list ’em all out for us.

GORDON: [AND THEN GORDON LISTEN THEM ALL]

Scratch that last one and you have the stereotype of a black woman.

EVAN: Okay, now rate yourself by that list of qualities.

GORDON: I realize that there are billions of people out there who have hellish existences, but taking in what I’ve dealt with in my own life, I’d say I’m pretty tough.

GORDON: I don’t have a family, but I certain provide for myself, proud proletarian that I am.

I’ve yet to be in a situation I’ve been unable to diffuse diplomatically, but I certainly have my limits and lines that I will not allow to be crossed.

And I view my sexuality as my own business. I ain’t exactly good with the ladies (see the emotionless bit), but I also think anyone who judges a man’s worth by his sexual activity isn’t worth the time of day anyhow (see the “no taking crap from anyone” bit).

Yeah, I’m a man. Or a woman. It kinda falls apart.

EVAN: A man is tough: I’m a pretty emotional dude. I distinctly remember crying after I saw A Walk To Remember. I was also 13, but I guess that’s neither here nor there.

A man provides for his family: Like you, I don’t have a family. I live with my granddad, though to be fair I do take care of him, so I’m good in that area.

A man don’t take none: I am not a confrontational person. I also can’t say I’ve been in a fight-or-flight situation, though, This remains to be seen, I guess.

A man get it on: Since I live by a certain religious standard, I have not yet gotten it on. See my post on virginity. I am a virgin.

A man don’t take none: I am not a confrontational person. I also can’t say I’ve been in a fight-or-flight situation, though, This remains to be seen, I guess.

So how do we stack up as men by most cultural standards?

GORDON: I think we stack up well, all things considered.

EVAN: Okay, I just remembered why I wanted to discuss this topic in the first place, and it pertains to the last manly attribute on our list [the one that we both happened to fail]: 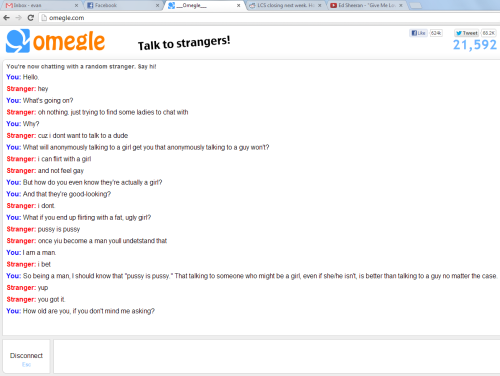 Click on the image to read it in a new tab.

How exactly does one respond to that?

EVAN: I’d say an ellipsis sums it up pretty well.

GORDON: Yeah, I’m going to call BS on that. I couldn’t begin to list the number of men who were celibate and achieved more in their lives than this guy ever will.

EVAN: Which I agree with completely. It is pretty messed up, though, how many people [guys] live by this rule of thumb.

GORDON: I think the point remains that this isn’t any reasonable way to spend one’s existence. Nikola Tesla accomplished more than a week than I imagine this guy fishing on Omegle will in his lifetime.

EVAN: To take a line from your book, touché.

GORDON: Going back to the original list, the issue is that most of this could just as easily be said of a woman. I work with people who are in pretty rough situations. Many of the women I work with a single mothers, living below the poverty line, struggling to provide for their families. Pride is really the only thing they have left. They don’t take crap from anyone, and they can’t allow themselves to be dragged down by their circumstances. Are they “manly” woman?

EVAN: I’d say that they fit three of the four categories, but it depends largely on how you want to view the word “tough.” I felt like we sort of defined it as having to do with emotions, which, and I don’t think I’m spouting insanity right now, are something that women seem to be pretty in touch with. Which would then put them at 2/4, or half the qualities.

GORDON: Certainly we can agree that these women quietly endure crap that would have most white-collar executives curled up in the shower weeping.

Barring the issue of promiscuity, everything we’ve covered would be- by our standards today and most standards the world over- “womanly” characteristics.

EVAN: Including the predilection towards physicality and violence towards others?

GORDON: You ever fought a woman?

EVAN: You know neither of us have ever fought anyone.

GORDON: Speak for yourself. I studied Judo for five years, and I had my share of matches against female opponents.

EVAN: We’re talking actual fights, though. Not martial arts matches with set rules and moves without the added chaos of scratching and biting [which I would probably carry out with gusto].

GORDON: Believe me, I got my butt handed to me plenty of times. There’s nothing but prejudice keeping women from being just as effective at fighting as men.

EVAN: Right, but that’s not a cultural expectation, is it?

GORDON: Not in this culture, no, but in other cultures this does exist. I’d point to the high numbers of women in the militaries of countries affected by leftist ideology- Nepal, for example

EVAN: We are talking the majority of cultures, though. Just as I don’t think I’d
equate homosexuality with “manliness” because the Spartans [who were very manly] engaged in it, I’m likewise not willing to accept that most societies placed women in that physically aggressive role.

EVAN: But I get what you’re saying.

My entire issue with contemporary feminism is that it tries spin traditionally “feminine” (i.e. submissive, weak, emotional) traits as being equally as healthy- if not more so- than traditionally “masculine” traits rather than trying to divorce itself from the old “feminine” trait set entirely.

EVAN: Don’t worry, I took it at face value.

And, since we’ve successfully transitioned away from a discussion on masculinity towards more of one discussing feminism, I’m forced to admit that we are well past our time limit.

GORDON: That we can agree on.

Until we get internet, it’s radio silence on my end.

EVAN: So I suppose you’ll have to say good-bye to these nice people until then, while I scramble to maybe find a replacement writer for the next little while.

EVAN: And I am going to recommend . . . okay, this is ridiculous, but our ideal girl. Just because I know your answer is something everyone wants to read.

That is all for today, folks. I’d like to thank Gordon [who left before this conversation could end] for heading over to his grandparents’ and getting online for this, he’s a real champ. Thanks for reading!

EVAN: Ladies and gentlemen, boys and girls, welcome to the first installment of E&GT where Gordon and I try to uncover the magic that was lost. The last post we did fell a little flat, so we’re here to casually discuss a subject we both know is awesome: DEADLIEST WARRIOR.

GORDON: That’s right- Deadliest Warrior, a show 90% about mutilating ballistic gel dummies, and it was STILL too intellectual for Spike. At least, that’s my version of why they cancelled it. You can probably tell we’re a little bit bitter about the whole thing.

EVAN: Ugh, Spike. Have you seen the little bits of footage they slot in between shows to fill up the space?

GORDON: I have not.

Readers, the following is kinda PG-13. I kind of apologize for embedding this, but it’s just too ridiculous not to: