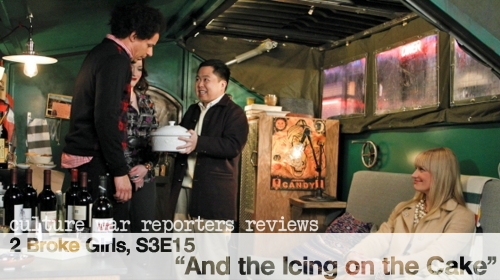 I don’t know if I made it clear last week, but I really like Deke’s dumpster house. It evokes the whole Tiny House Movement that’s going on which actually helps make it appear less cartoonish, and it also proves just how much I loved The Boxcar Children when I was younger. All that being said, the prospect of there being a wine and cheese party in such a small space just oozes with promise, sort of like how the garbage outside of Deke’s place oozes with . . . other things.

In the hands of a more capable director and more creative writers, I’m ideally thinking the crowd from fellow CBS sitcom How I Met Your Mother, the majority of this episode could’ve taken place in the green dumpster no problem. There were so many interactions to work with, what with the whole diner crew plus Deke and Chef Nicolas and Bebe. Unfortunately the focus was pulled to the two title and the Pastry Schoolers don’t really mix in with the Dirty Diners [those are their gang names now and I stand by them].

Anyway, these reviews aren’t about me harping on how the show could be better [at least I’m trying to stay away from that] but really about how this has turned into one big rom-com. I suppose it could be argued that that’s all most sitcoms are in general, with the aforementioned HIMYM being a primary example, but most don’t fall on these tropes as heavily as 2 Broke Girls has. I mean, this week Deke has a secret and oh no, it’s a huge obstacle that Max will have to overcome [if she does, I mean, I don’t know if she will].

See, it turns out that “that cute mochachino homeless guy with the jew fro” is rich.

And it’s not like Max has learned over the past 3½ seasons that rich people can be good people coughcoughCarolinecough, but I suppose it’s valid because Deke was sort of lying by omission. Ms. Channing figures it out because a) his “adult grape juice game is on point” and b) he once visited a very expensive resort. Nice work, Nancy Drew.

As always, credit where it is absolutely due. This is all prefaced by the fact that while at pastry school Deke told Max he loved her and she reciprocated. Most shows take entire seasons to get to that point, and it’s definitely strong proof that they’re getting along really well. That’s what makes his lie seem so much like betrayal, and why she refuses to forgive him at the episode’s closing. It’s certainly an accelerated version of most relationships, but I think it’s working, so good for them.

To cap this part of the review on the most negative point possible, Bebe is leaving. This is after my being absolutely thrilled that she showed up at the wine and cheese party [with Velveeta, I think?] and psyching myself up for the prospect of seeing much more of her. How dare they do this to me? Mary Lynn Rajskub, you were truly gone too soon.

You may have left your medication, but you took this reviewer’s heart with you-

The Title Refers To: Well, they ice cakes at one point, and then Deke being rich could sort of ironically be referred to as “the icing on the cake” as far as Max is concerned. Conversely it would still work from Caroline’s POV. You could also really read into it and say that sugar is slang for money, and icing is made of sugar, then . . . yeah, you know what I’m getting at I can stop.

This is new, and I saw another 2BG review do this, but here is a poll: