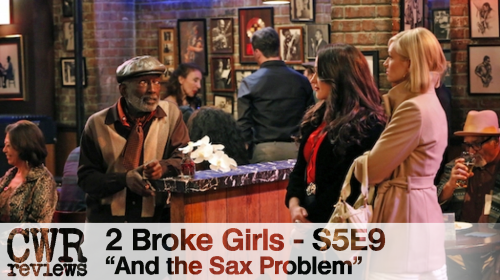 “The Sax Problem” that’s of concern this week is strictly Earl’s, and in much the same way Sophie and Oleg got the most character development in “And the Basketball Jones” last Wednesday he takes centre stage [no pun intended]. Given how often Morris has been relegated to the sidelines I was actually apprehensive about how he would do being given so much heavy lifting, but I never should have doubted him. END_OF_DOCUMENT_TOKEN_TO_BE_REPLACED

2 Broke Girls, S5E8 “And the Basketball Jones”: A TV Review 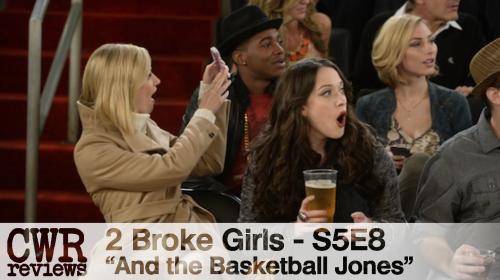 I’m gonna start by reminding all of you nice people that this show’s creators were paying so little attention to last week’s episode that they didn’t even bother changing the “Current Total” or the “New Total”, features that were once the entire crux of 2 Broke Girls. Once upon a time this show was all about Max and Caroline saving up for something big, and it’s very telling that this once important detail was recently overlooked.

As for this week, well, it’s another one of those episodes. And by “those episodes” I mean that not a lot happens. I was going to add more to that description, but it says it all. At this point the overarching narrative of the season appears to be Sophie and Oleg’s efforts to have a child together, and to that effect they take a significant step forward while the titular characters just live their lives as usual. END_OF_DOCUMENT_TOKEN_TO_BE_REPLACED 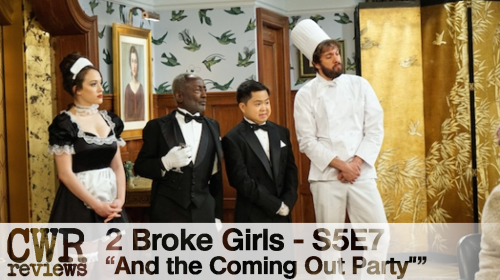 Honestly, it’s been so long since the show has referenced the fact that Caroline Channing is a formerly wealthy heiress that it’s weird to think about how classism was once the foundation the show was built on. Now obviously the premise of the show is found in its title, a pair of young women struggling through near-poverty, but the first season really capitalized on one of the two leads having been filthy rich.

That also means that it’s been a very, very, very long time since 2 Broke Girls has decided to retread the plotline of Caroline ending an episode with a realization about her new life being, in some ways, far superior to her old one. Until this week, that is. END_OF_DOCUMENT_TOKEN_TO_BE_REPLACED

2 Broke Girls, S5E6 “And Not the Regular Down There”: A TV Review 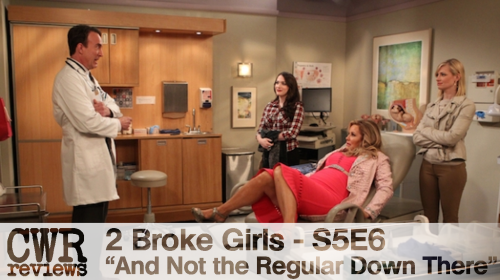 Before we get right into the review, I want to spotlight a fact you may not be aware of: there’s a chance 2 Broke Girls may be cancelled. According to the aforelinkedto TV By The Numbers the CBS sitcom has recently received ratings below Mike & Molly, another three camera show from the same network that was axed in 2015.

On the flip side of things, it’s been reported that over in mainland China the show is actually doing quite well. 2 Broke Girls is actually the number one most-searched American TV show on Baidu, the search engine of choice for people living there. Following behind it are such programs that you would expect to top the list, like Breaking Bad and Game of Thrones. Unfortunately a Chinese audience is not going to convince CBS to keep the show around, which is why I’m going to start approaching these reviews from a particular angle, specifically: what can 2 Broke Girls do to save itself? 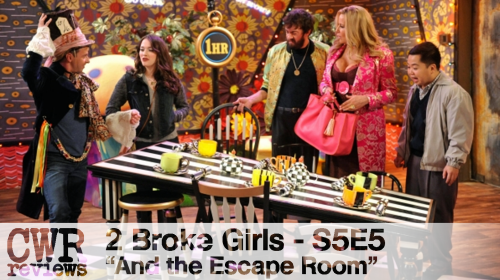 With “And the Escape Room” 2 Broke Girls continues its penchant for covering topics long after they first rose to relevance. That’s not to say that the concept of escape rooms has faded from the public consciousness [I’ve seen new ones popping up in downtown Toronto], only that they’re not exactly newsworthy anymore.

Having reviewed one such establishment for this blog, and having gone to other vastly better places since, I was actually excited to review this week’s installment of the show, primarily as an actual escape game. Things actually started out pretty well in that regard, too, with the diner staff [this entire scenario is a team-building exercise cooked up by Han, which is not an uncommon event] entering into an almost completely dark room. Over on the wall they see the following: 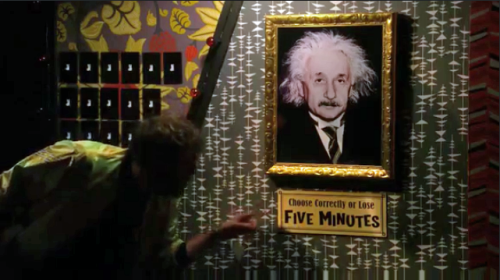 Oleg didn’t recognize the man in the portrait, surprising no one.

With 26 light switches on the left the gang connect that number to letters in the alphabet. Han surmises that the right one might be “L”, for “light”, but Caroline more accurately suggests that it might be related to the equation Albert Einstein is most well-known for. They flick the fifth switch and the room is bathed in light. As mentioned, a promising start. END_OF_DOCUMENT_TOKEN_TO_BE_REPLACED

2 Broke Girls And the Interview with Federico Dordei, Part 2 – Behind the Scenes at Stage 21

AT THE REQUEST OF FEDERICO DORDEI HIMSELF I HAVE TAKEN DOWN THIS ARTICLE. APOLOGIES TO ANYONE INTERESTED IN READING IT. 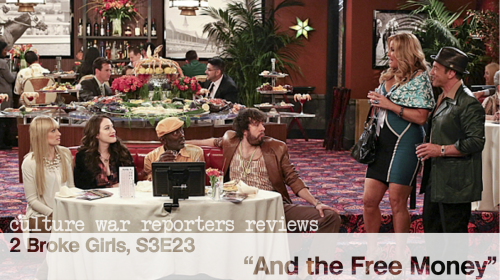 It is fine to have a cold open which revolves around the girls paying their bills and doing shots. Ain’t nothing wrong with that, not for a second. The issue is that Caroline tells Max [and us] that there are “only a couple bills to go and only $149 to pay them.” Ms. Channing, that could not be further from the truth. At the end of the last episode you had $2,614. END_OF_DOCUMENT_TOKEN_TO_BE_REPLACED