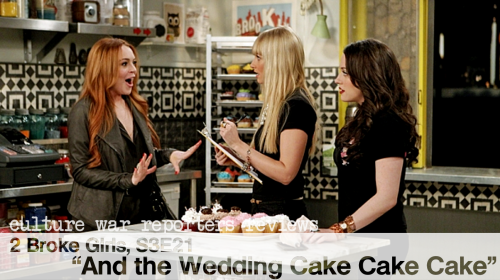 I had written this entire intro prior to watching this episode about how we should probably start readying ourselves to bid Deke adieu. The show had been moving towards him and Max breaking it off with no hope of reconciliation for some time. That and the fact that Eric Andre’s joining FX’s upcoming comedy Man Seeking Woman as one of the main cast. Altogether it seemed to point towards us not having much longer to enjoy the presence of one of my favourite Blewish [that’s half-Black half-Jewish] comedians.

This is literally the last time I’m going to bring up the rom-com narrative style that has permeated the show basically ever since Deke showed up [first mentioned back in Episode 13]. He and Max have had their ups and downs, but it all came to a head last week when his parents decided to cut him off completely. When last we saw our heroines they were on a mission to push Deke’s dumpster house clear across the city in order to reconcile him with his folks, trading his relationship with Max for financial stability and overall a better life.

When we return we find that they’ve broken up and that’s that. Caroline asks her early on if she’s alright and Max responds that she’s “the one who threw his ‘fro out the do.'” Much later on, in the clearest episode I’ve ever seen that the writers’ room is well in tune with the Maxoline shippers–

-the former heiress tells asks her friend again, “So are you really okay, I know you really loved him.” The response is the kind of snark we’ve come to expect from Max Black: “I did, which was the worst ’cause it made me feel almost like a person.”

As far as I can tell that is the end of Max Black and Deke Bromberg. IMDb only lists all eight of the episodes that Eric Andre has already been in, so at this point I think it’s safe for me to call it. This of course means no huge emotional climax for the two, no firm conclusion to their relationship that we as an audience are privy to. No, instead we’re moving on to an episode that revolves around celebrity guest appearance Lindsay Lohan.

Look, she does a passable job at playing indecisive bride-to-be Claire. The very, very brief role for Stephanie Courtney [ie. the ever-Progressive Flo] as Eleanor, a neurotic wedding planner was thoroughly enjoyable. Kat Dennings and Beth Behrs together take part in the most enjoyable bit of physical and set comedy I’ve seen on the show ever, involving them carrying a cake onto a subway car and having their seat taken by an old woman, being hemmed in by two blind men, and besieged by a breakdancer. At the end of the night, though, I wasn’t satisfied.

I fully realize that it’s no HIMYM finale, that much should be said. Even still, I can’t help but feeling robbed of the end to a relationship that I was, for better or for worse, invested in. It cheapens it as a whole, and in spite of the references to Max’s sadness that they were sure to seed throughout it felt almost like it had never happened.

Ultimately this was just some episode about how bridezillas are a thing that exist. Max and Caroline’s friendship isn’t stretched to any levels, and as a whole it was just a gimmick. An fairly entertaining gimmick, but a gimmick nonetheless.

With that in mind, I’m going to commemorate Eric Andre’s passing [onto better and brighter things] with a short diatribe how this episode sought to exacerbate my disappointment with reminders of Don’t Trust the B—- in Apartment 23. For one, Claire’s fiance is Ben Lawson, who appeared on the show as Chloe’s love interest, and that’s a big one. The other is less so, because a bunch of kooky store names are thrown around [“Get the Frock Out”, “Unbeweavable”, “The Wandering Juice”] for huge laughs. Listen up, 2BG writers’ room, this was the coffee shop where June and Mark worked on the other [better] show:

You know how often that was brought up? Literally never.

The Title Refers To: Caroline sees what Max has baked and tells her “That’s quite a cake cake cake!” I have no idea of this is a reference to anything, but the audience thought it was funny.