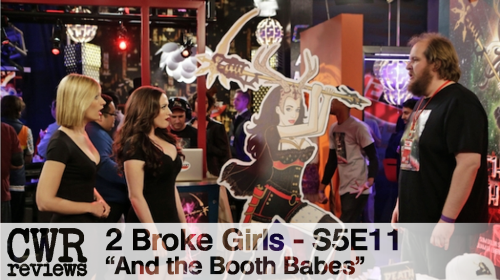 Next week 2 Broke Girls makes its way to Thursday to join CBS ratings juggernaut The Big Bang Theory, which actually segues really well into a lot of what this review is covering. See, while the latter has absolutely killed it for the network it’s also received a fair amount of flak, primarily from the types of people it claims to represent. General nerd news site Bleeding Cool referred to it as “the television show that hates you” back in 2011 and hasn’t stopped since, and I actually took time on this very blog to cover an episode that featured some particularly divisive promos.

All of that is to say that CBS as a network doesn’t have a stellar track record when it comes to appealing to what I’m going to call “nerds” from this point on [Supergirl not withstanding, which I’ve only heard excellent things about]. Couple that with 2 Broke Girls not having a stellar track record with most topics and we find ourselves here, tonight, with me dreading every second leading up to this episode, tempered by a bizarre sense of excitement.

It turns out I hated it.

As I had feared all along, this episode paints nerds with a brush wide enough to be a roller, with Han’s friend Ned’s [Dominic Burgess] first lines being “You know my name?”, followed by a rapid pull on his inhaler. 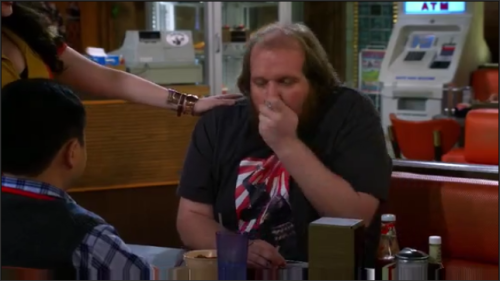 That’s followed up by Han being hounded by Eunice, his “Super Nintend-ho”, who fell for him hard after he saved her from a burning building and proposed to her [in-game, of course]. While viewers may initially think that the diner owner is going to get lucky with yet another conventionally unattractive woman [see: “And the Kilt Trip”] this time around his disinterest in, bordering on outright fear of, her is what’s played for laughs.

My latter two gripes are vastly more personal, with the first being that Sophie and Oleg need to move into Max and Caroline’s due to ongoing renovations in their shared apartment. This is seen as a difficulty, and it’s upsetting to me because, well, I’m poor. Not that I’m working in food service or anything, but I’ve literally never lived in a space even half as large as their studio apartment in my adult life. Like, I get that it has to be a little bigger due to the restrictions of the three-camera sitcom format, recording live, but it’s massive. Hearing about all of the things “doing better than old Caroline” [Sophie’s unborn child included] is just rich [pun 100% intended] from someone who lives in a living space with a full kitchen and a horse.

The last one is that Max being the face of Ned’s video game, Death Bitch, feels altogether too similar Chloe being the basis of Shitagi Nashi, a Japanese comic book that translates to Tall Slut No Panties–

-and honestly any reference to the vastly superior Don’t Trust the B—- in Apartment 23 is always going to raise my sodium to dangerous levels. I began another review of 2 Broke Girls listing all of the similarities between the two shows [the relationship between Max and Caroline and Chloe and June were shockingly similar when first starting out] and am still not over the Don’t Trust the B—-‘s cancellation back in 2013. I’m not sure I ever will be.

So, yeah. I wasn’t a huge fan of the show this week.

In general, deriding nerds is always an ugly thing to watch, and at this point feels incredibly dated. Not to say that there’s a broad acceptance of everyone who falls underneath that particular banner, but the increasing popularity of comic book movies, among other things, is proof that things have changed a lot since Revenge of the Nerds. To the point where Max’s admission that she wants to attend GamesCon because she’s “really into video games” and “[has] known since [was] was ten” doesn’t feel shocking, or even surprising. I mean, both that and getting free swag.

Having Max and Caroline get into GameCon by working as booth babes brings up a very real, very uncomfortable aspect of an industry that appears to cater [at least with their flashier events and announcements] almost exclusively to men. Unfortunately that, or Death Bitch itself, isn’t used as a springboard to explore sexism in gaming, although it does lead to one of a handful of moments that I legitimately liked: 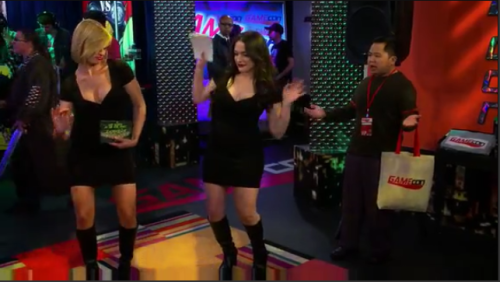 Beth Behr’s physical comedy can’t save every episode, but it is consistently delightful.

The big conflict, if that’s what you want to call it, is Ned basing Death Bitch’s Immorta on Max’s likeness, and the legal recourse that results from her not giving her permission. Of course, it is brought up by studio owner Tony [Bryan Callen] that she can’t afford a lawyer, which I suppose is true. Ultimately the eponymous duo [Yak Girl was based on Caroline] haggle their way into a gig dressing up as their respective characters and taking pictures with their adoring fans.

Cue my next favourite moment[s] from this trainwreck of an episode: 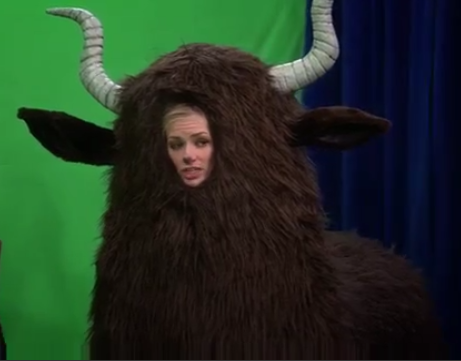 Honestly, I was almost hoping we wouldn’t see it because I was thinking about drawing fan art of what Yak Girl might actually look like.

That Yak Girl costume is the best thing that the 2 Broke Girls department have ever created, and probably will ever create.

After Caroline fends off the Han-gry [see, I can make bad jokes too] Eunice and ends up breaking off her hindquarters the episode ends, more or less. It’s never really explained if they continued with what they were doing, though it is implied that they were fired. It’s also never explained if the ostensibly successful Death Bitch will have any further effect on either of their lives [it’s far more likely than something more niche like a Japanese comic]. No, this episode wraps up with not much more gained than a cardboard cutout of Immorta that, if permanently added to the girls’ apartment or the Williamsburg Dinner, will be the most significant evidence that this show actually progresses from week to week.

The Title Refers To: Booth babes, defined by the Geek Feminism wiki as “is a “women (mostly women, with the occasional exception) employed by brands to staff booths at trade shows,” which is what Max and Caroline were for at least a little while.