Tag Archives: behind the scenes

2 Broke Girls And the Interview with Federico Dordei, Part 2 – Behind the Scenes at Stage 21

AT THE REQUEST OF FEDERICO DORDEI HIMSELF I HAVE TAKEN DOWN THIS ARTICLE. APOLOGIES TO ANYONE INTERESTED IN READING IT.

Looking Back at a History of Booze and Bacon 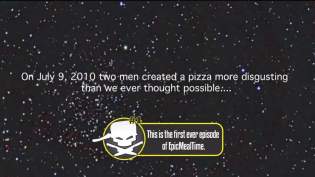 It’s been pretty evident for a while now that a lot of you have gotten here due to a post I wrote almost exactly a year ago, “Epic Meal Time: Leaving Grease Stains on Pop Culture.” In it I extol the internet show and its evolution into something that ultimately rewards long-time viewers, as well as its impact on pop culture.

Coinciding with the anniversary of my original EMT post is the show’s second birthday, and a loving tribute to their first episode ever, the Fast Food Pizza. Video below:

While two whole years of epic meals is impressive enough, what got me even more excited is what the crew uploaded yesterday.

The new feature, going by the name “Flashback Friday” is a director’s commentary of sorts, presumably all done by creator and star of EMT, Harley Morenstein. Essentially the entirety of their Fast Food Pizza episode, the main difference takes the form of pop-ups that are very reminiscent of Xbox Live Achievements, or [probably more accurately] VH1’s Pop-Up Video. 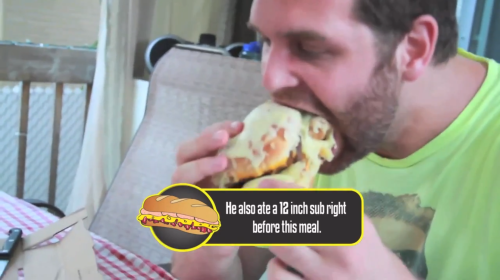 Additional changes include a bacon strip censor bar for Muscles Glasses’ eyes, as well as vocal distortion. From this point on they moved forward with turning him into a silent, powerful destroyer of fast food and liquor.

What I probably appreciate more than the fact that they made this video is that they haven’t removed the first. There’s a trend on the internet to simply remove or take down earlier work, or whatever you’re not proud of. Both Harley and Epic Meal Time are sticking to their roots in remembering the first video that got them where they are today. And that means not removing this video with Alex Perrault [as you’d call him sans aviators, I suppose], or another where they, believe it or not, actually use vegetables.

EMT announced on its twitter account that if fans liked the video then they’d continue to do more. While not all of the feedback was positive, I for one hope that the likes, and views, continue to multiply. Watching the behind the scenes of almost anything is interesting, even more so learning about the history behind two years of booze and bacon.

EDIT: After their fourth episode on YouTube the EMT guys have decided to move the show over to their own site. You can watch every one of the episodes here, where they continue to be put up every Thursday.