GORDON: Friends, Romans, Countrypersons! Lend us your ears! We come to try out a new twist on our weekly discussions!

EVAN: Given Kat’s absence that I mentioned prior, I took a page from what’s been going on over at Marvel to really shake things up hereabouts [while still keeping the spirit of the blog you all love so much].

So Gordon and I got to brainstorming a feature to replace Culture War Correspondence for now [?], and what we settled on was a riff on a little something called “Defending Your Sh*tty Taste”, a podcast on Cracked.com.

GORDON: As the name would suggest, “Defending Your Sh*tty Taste” simply entails each of us bring up one or more cultural elements- shows, music, trends, etc.- which are generally despised, devaluated, or looked down upon by the general public, and proceeding to talk about what value we see in ’em and why we personally enjoy ’em.

EVAN: Before we get started in earnest, I think it would be good to lay down some ground rules, and sort of explain the general format.

Like you said we’ll each be bringing up our own topics [which we’re well aware have their problems] and extolling their virtues. It will be up to the other person to point out the flaws. What I’m going to insist on is that we solely target the cultural element itself, not bringing up or comparing anything else [ex: “But as a communist doesn’t this conflict with your belief that _____?”]

GORDON: I’d also point out that this isn’t really a debate. We’re not here to bash each other’s pleasures, no matter how sick and indecent they might be… Evan.

END_OF_DOCUMENT_TOKEN_TO_BE_REPLACED

KAT: It’s also why I just can’t enjoy jamming out to Rihanna and Eminem’s romanticization of domestic abuse (“Love The Way You Lie”). END_OF_DOCUMENT_TOKEN_TO_BE_REPLACED

It’s about two in the afternoon on a Friday, and I’ve clearly surpassed my self-imposed noon deadline. This is kind of an awkward place to be, because I’m clearly lacking the motivation to write, and all of the topics that I’ve been planning on tackling require a lot of research, so . . .

I’m going to talk about a topic that I know little to nothing about: music. 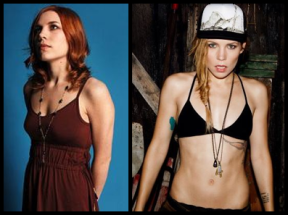 Last summer I wrote a post called “Holly Brook is Skylar Grey,” about singer/songwriter Holly Brook Hafferman, who took the stage name Holly Brook, released an album, and years after rebooted her persona as the current Skylar Grey.

If you really don’t have time to read the six short paragraphs that make up my first post, I hypothesized that her song “Dance Without You” was a clear indicator of her wanting to start anew without the baggage of her past self. With that being said, I was legitimately surprised when I discovered recently exactly where her new path has taken her.

I subscribed to Skylar Grey’s email newsletter a while ago for curiosity’s sake, and found a link in my inbox one day exclaiming that the lyric video for the song “C’mon Let Me Ride” had hit YouTube. Here it is:

It’s definitely catchy. It’s also a song that begins with the lyrics “If you got a sweet tooth / You can taste my watermelons.”

Skylar Grey began her career singing the bridges to rap songs such as Dr. Dre and Eminem’s “I Need A Doctor,” and Lupe Fiasco’s “Words I Never Said.” While not the best use of her songwriting abilities, at the very least they tackled common topics such as loneliness and regret. “C’mon Let Me Ride” is a song about sex.

The following is an acoustic session of Holly Brook performing the titular song from her album “Like Blood Like Honey”:

I don’t want to hammer this point, because I feel it’s obviously overstated after watching both videos. At the very least let me point out that both songs have their foundations in comparison, riding a bicycle, and blood and honey, and leave it at that.

According to Wikipedia, what Holly Brook was to indie-pop-rock, Skylar Grey is now to pop and hip hop. I definitely get that artists of every medium are going to grow and evolve in their craft, but have difficulty getting behind her choices. According to Rolling Stone the song is supposed to be satirical, and “a jab at ‘overly sexified music, media and the girls who try and imitate it.'” I guess I’ll leave it up to you whether or not that’s communicated well.

That same article also reveals that her original project under the Skylar Grey moniker, “Invinsible” is being reworked as “Don’t Look Down,” on which the aforementioned single about bikes will be featured. It just seems like a lot of image refinement in a very short period of time, and if she’s accurate in saying that the song is “about as far as [she takes the playfulness of her album]” I’m not sure what fans are supposed to expect, or how it will ultimately turn out.

At the age of 18 Holly Brook Hafferman, going by her first and middle names, was signed to Machine Shop Recordings, Linkin Park’s vanity label. Two years later she made it big by being featured and singing the chorus on Fort Minor’s fourth single, “Where’d You Go.” Holly Brook’s debut album, Like Blood Like Honey, dropped two months later, on June 6th 2006.

The above video is one of the only music videos I could find of her on YouTube, and it’s a live recording and not a professionally filmed one. While nothing flashy, it manages to sum up pretty well where she came from musically, “heartache and self-discovery over heavy piano chords.”1 Like Blood Like Honey managed to hit number 35 on Billboard’s Heatseekers Albums chart, but soon after she faded into obscurity.

This year Holly Brook reentered the music scene under the new stage name Skylar Grey, and went on to do big things. She helped write sections of Eminem and Rihanna’s hit “Love the Way You Lie” and was featured on tracks by both Diddy-Dirty Money and Lupe Fiasco. Her debut live performance as Skylar Grey was at the 53rd Grammy Awards where she performed “I Need A Doctor” alongside Eminem and Dr. Dre.

Already having accomplished so much this year Grey is currently working on her solo studio album, titled Invinsible. Below is the only video currently on her VEVO YouTube channel, a music video for the song “Dance Without You.”

Although it’s never directly stated who it is Skylar Grey would like to “dance without” it seems apparent that the person is Holly Brook, and the video drips with (unsubtle) symbolism. Evidence can be found in her black clad character’s actions bordering on murderous [the neck-snapping action at 1:35] towards her hospital gowned alter-ego and her dismissively stepping over the latter’s prone body at the video’s conclusion. The message is clear: It’s time to change and move on.

It’s impossible for anyone to judge Skylar Grey’s decision to change her image and genre of music, especially taking into account her past with the music industry.2 The chorus of “Wanted,” a song from Like Blood Like Honey, begins with the words “I will be wanted / I will not fall from grace.” Maybe this was just her way of making those words ring true.

2. In reference to her fall out of fame she’s quoted as saying “[s]uddenly I was chewed up and spit out,” admitting a lot of confusion over what had happened in the past. Source: http://www.latimesmagazine.com/2011/06/hooked.html