On The Image Problem of Christ

Back when this blog started up, Evan and I had a discussion about a lecture given by Socialist novelist China Miéville. During that lecture, Miéville commented that “if one person hears what you’re saying and does something horrible, the issue’s probably with them. If hundreds of people consistently start doing horrible things, it’s probably time to re-examine your message.”

Those words returned to me a few months ago as I watched Family Guy’s “The 2000-Year-Old Virgin”, which depicted Jesus as a cowardly shyster, lying about being a virgin in order to bed Lois Griffin (and more than a few other women).

Grotesque? Repulsive? Offensive beyond all description?

It was certainly far from being funny, but readers, yours truly simply was not offended.

As sacrilegious and bitingly edgy as I’m sure the writers thought the story was going to be, I was merely disappointed by it. While I’m not going to excuse the laziness or insensitivity of Seth MacFarlane or any of Family Guy’s writer’s, I actually don’t think the majority of blame should be placed on them.

I think it should be placed on Christians.

END_OF_DOCUMENT_TOKEN_TO_BE_REPLACED

5 Reasons Why Galavant is my New Guilty-Pleasure Comedy

I love watching comedies when I’m in school. It allows me to check out mentally on those days when I feel like I can’t seem to turn off my brain. Although I am looking for thoughtless fluff, I still want to avoid straight-up terrible writing and plots. This makes my comedy search a little more difficult. Luckily, John and I came across Galavant, which provides what I am looking for in at least the following five ways.

1.It’s funny, without being offensive

I hate Seth MacFarlane. Just don’t like the guy at all. Yet his form of humour (i.e. let’s see how far we can push the line without getting in too much trouble) seems to dominate contemporary comedy. There certainly have been times when I have laughed at Family Guy or American Dad, but more often than not they leave me with a sour taste in my mouth.

One of the only gif’s from Family Guy that made me laugh instead of cringe.

I still want something that will surprise me into laughing out loud, but I don’t want to only ever be surprised because the punch line was too offensive for me to be expecting it.

Unlike McFarlane’s shows, Galavant is all about pushing around puns and being- well, for lack of a better word- silly. After being bombarded with jokes that make fun of real life trauma, it’s nice to be able to laugh at something because it’s just silly.

END_OF_DOCUMENT_TOKEN_TO_BE_REPLACED

GORDON: Friends, Romans, Countrypersons! Lend us your ears! We come to try out a new twist on our weekly discussions!

EVAN: Given Kat’s absence that I mentioned prior, I took a page from what’s been going on over at Marvel to really shake things up hereabouts [while still keeping the spirit of the blog you all love so much].

So Gordon and I got to brainstorming a feature to replace Culture War Correspondence for now [?], and what we settled on was a riff on a little something called “Defending Your Sh*tty Taste”, a podcast on Cracked.com.

GORDON: As the name would suggest, “Defending Your Sh*tty Taste” simply entails each of us bring up one or more cultural elements- shows, music, trends, etc.- which are generally despised, devaluated, or looked down upon by the general public, and proceeding to talk about what value we see in ’em and why we personally enjoy ’em.

EVAN: Before we get started in earnest, I think it would be good to lay down some ground rules, and sort of explain the general format.

Like you said we’ll each be bringing up our own topics [which we’re well aware have their problems] and extolling their virtues. It will be up to the other person to point out the flaws. What I’m going to insist on is that we solely target the cultural element itself, not bringing up or comparing anything else [ex: “But as a communist doesn’t this conflict with your belief that _____?”]

GORDON: I’d also point out that this isn’t really a debate. We’re not here to bash each other’s pleasures, no matter how sick and indecent they might be… Evan.

END_OF_DOCUMENT_TOKEN_TO_BE_REPLACED

Shame Day: Game of Thrones, The Walking Dead, and Writers Who Kill Everyone

Before we get started I should probably give the obligatory warning about spoilers. Spoilers below, beware! [Seriously, there are a lot of spoilers -Ed.]

So, I watch Game of Thrones.

I watch it for the awesome female characters, although a little begrudgingly. I mean, do they have to put boobs in my face EVERY SINGLE EPISODE? It’s like the writers are sitting around and realize “Hey guys, we don’t have any of the main characters’ boobs in this episode! What are we going to do?” and then the guy in the back of the room is like “Why don’t we set another scene in a brothel!” and everyone goes “Oh yeah, great idea.” Seriously, I challenge you find me two episodes in a row without boobs. END_OF_DOCUMENT_TOKEN_TO_BE_REPLACED 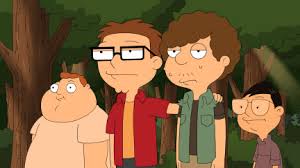