My mom taught me how to read when I was 4-years-old, which WebMD, a reliable source if there ever was one, says is about two years younger than average. According to Iowa Tests [American standardized tests that I ended up taking at an American school] I was reading at a 12th Grade reading level when I was only ten. When I inevitably ended up majoring in both English and Writing at a Christian liberal arts college I was, to put it directly, horrifyingly average. 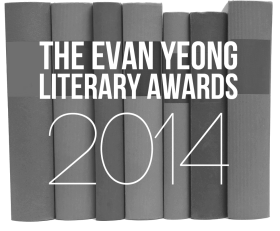 I write all of that not to share that I was some sort of prodigy [I wasn’t], but that I was good at reading because I loved it. The written word continues to be my favourite artistic medium, and my appreciation for the literary has not faded. Today I start what I hope to be an annual tradition, a review of what was read in the past year to acknowledge the standouts [for better and for worse]. These are the 2014 Evan Yeong Literary Awards.

In 2014 I resolved to read 52 books, and while I only ended up stopping just four short of my goal, I do believe it was an overall success. You can check out a full list [with the exact dates of when I read each one] at this link. END_OF_DOCUMENT_TOKEN_TO_BE_REPLACED

LES MIS – it’s one of those things about which people who are familiar with it are very excited, and the rest of the world has no idea what it is or what is going on.

Info has been trickling into the internet for the past few months, and with any movie like this, people almost immediately get pretty rabid about the casting, so let’s muse over that for a while.

Hugh Jackman and Russel Crowe are to play Jean Valjean and Javert, respectively. This is so perfect that I have no snarky comment to make about it. I am so excited it makes me feel ill.

Geoffrey Rush will play Thenardier in the new Les Mis movie. Bizarrely, both of these pictures are of him.

Another illness-level-of-excitement-inducing thing: Geoffrey Rush will play Thenardier and will be terrifyingly perfect for the role. Rush was actually already in the crappily adapted 1998 movie(the one with Liam Neeson and Uma Thurman) as Javert, and he did a fine job (as he is a fine actor), but will be more impressive in a borderline caricature role like Thenardier, I think.

Mme. Thenardier will be played by Helena Bonham Carter. All right. Obviously. There is the risk that her in the role will be too similar to her Mrs. Lovett in Sweeney Todd.

It already seems like all her as Mrs. Lovett would need to become Mme. Thenardier is a little less goth and worse teeth. She will be terrifying and beautiful, to be sure, but I don’t know if that’ll be super interesting at this point, weirdly. Helena Bonham Carter in The King’s Speech interests me more than another Helena Bonham Carter with eyeshadow sinking her cheekbones.

Anne Hathaway will be Fantine. This will make some people mad – especially considering the unexcited response to Alice in Wonderland. Amy Adams was purportedly also considered for the role, and it’s sort of surprising that she didn’t get it – she seems to be the new Anne Hathaway-type character, with more popular movies (to the younger crowd) lately. This could be good for Hathaway. It could also be bad for the movie. Maybe that’s just because I still define Anne Hathaway by The Princess Diaries.

A shortlist for the role of Eponine has been released, which includes Scarlett Johansson, Taylor Swift, Evan Rachel Wood, and Lea Michele. This is mildly worrisome – some of my reasons might be petty but still, worrisome. Eponine is about 15; Scarlett Johansson is 27 – and wouldn’t easily or believably look much younger (she’s usually made to look older than she is) (look at the woman’s body, for goodness’ sake). At the thought of Taylor Swift, a blonde country singer, being cast as the neglected and not-as-pretty-as-Cosette Eponine, rabid teenage musical theater buffs will gnash their teeth. Lea Michele reportedly “knocked it out of the park” at her audition – but I can’t see how Lea Michele could escape her role as the obnoxious and talented belting alto from Glee. Eponine being such a classic role does nothing to help that – it’s a role that Rachel from Glee would play. I do prefer Lea Michele in terms of her capability for annoyingness over the other 3; Eponine’s role is supposed to be tragic and self-pitying, not demure and victimized.

Eddie Redmayne in The Pillars of the Earth miniseries

Eddie Redmayne (Jack in the Pillars of the Earth Series) will be Marius; he will be appropriately annoyingly earnest and attractive.

They’re actually holding an open casting call for the role of Cosette in NYC. In the context of the rest of the cast, this obviously indicates the young, ingenue quality that the casting directors are looking for – an unknown talent (a la Robin Wright in The Princess Bride) in between Russell Crowe and Geoffrey Rush. It’s a pretty common take on Cosette – it might idealize the character a little too much, but that’s a large part of the novel itself.

Theater geeks are on the prowl as information comes out. There are rumors that the movie might be released in 2013, not 2012, as filming is expected to last through the summer.

What I’m nerdily looking forward to is seeing what they’re going to do with the accents – even though the film is set in France, the theater community is kind of used to hearing everything in cockney (as they all have the original London cast CD) – will they speak with an American accent? With a French accent (like the Russians speaking English with a Russian accent in K-19)? Or will they just throw some British accents in there to make it more foreign-seeming (like in the 1998 Les Miserables, The Prince of Persia, all of the Star Wars movies, Gladiator…)? So we’ll see what choice they make with that. One just hopes the singing will be good.

World War Z Minus the History

In 2006 Max Brooks’ novel World War Z: An Oral History of the Zombie War hit bookshelves across North America. As a sequel to his previous book, The Zombie Survival Guide, it was guaranteed to acquire cult status, with zombie- lovers all over the world treating its predecessor as a bible for the imminent undead apocalypse. Fans were thrilled when it was announced just the following year that the rights to the film adaptation had been bought by Plan B Entertainment, Brad Pitt’s film production company.¹

Although the film struggled early on financially2, filming finally went underway this summer. It wasn’t until just three days ago, however, that Paramount released their official synopsis for the film, which goes as follows:3

“The story revolves around United Nations employee Gerry Lane (Pitt), who traverses the world in a race against time to stop the Zombie pandemic that is toppling armies and governments and threatening to decimate humanity itself.  Enos plays Gerry’s wife Karen Lane; Kertesz is his comrade in arms, Segen.”

To be fair, film adaptations of books have often changed substantial plot points to the benefit of the film’s reception, et cetera. Stuart Little was a hit with children because it didn’t feature what is essentially a mouse who acts like a little man who was born of a human womb. Teenagers enjoyed A Walk to Remember because it was set in the 90s and not in the mid-1950s.4 World War Z, however, is not a novel that required such significant changes.

In reference to the latter part of the title, An Oral History of the Zombie War, the novel consists of a number of interviews conducted just ten years after the last country was officially deemed victorious over the undead hordes. What makes the scope of the novel so grand is who is being interviewed.

Beginning with Chinese doctor Kwang Jingshu and the minor outbreak in New Dachang and reaching as far as Xolelwa Azania of South Africa, reading through World War Z is a global experience. Tying the novel together are several interviews with Todd Wainio, a former U.S. Army infantryman who had taken part in the greatest military defeat of the Zombie Wars.

Pitt’s adaptation with himself as a modern-day Cassandra5 is not the story that needs to be told. By omitting the latter part of the title the film will ultimately fail to capture what made the novel stand out among the rest: an almost uncomfortable sense of peace after a decade at war and one man questioning why exactly it all happened.

The film will be watched by many because even those who haven’t read the book have heard the title World War Z. They were probably raved to about the novel and how it captured the horrors of a zombie pandemic in a way that was both realistic and emotional. It’s too bad that they won’t realize the film is just another fast-paced action thriller with a bit of zombie thrown in until they’re sitting in their seats.

1. Plan B Entertainment was originally founded by Brad Pitt, Jennifer Aniston, and some other dude. Which had to have been awkward, especially for the other guy.

2. It’s hard to believe the amount of fun these newswriters must be having coming up with these titles. Source: http://nymag.com/daily/entertainment/2011/03/world_war_z_brad_pitt.html

4. As well as significant deviations from the plot as well as Shane West as a rebellious badboy, etc etc.

5. King Priam’s daughter, soothsayer of Troy. Warned her countrymen the danger that was the Trojan Horse, to no avail. Just in case you were wondering.