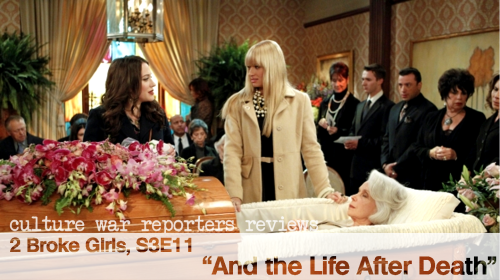 I had a lot of good will towards this show saved up from last week’s episode, but you would be surprised how quickly that started draining when I found out what this one was about. See, the most significant death in my life has been my grandmother’s, and while the deceased in this case was Caroline’s nanny just thinking about it made me pretty uncomfortable. 2 Broke Girls is not a show with a great deal of tact, and I was pretty apprehensive going into things-

But you know what? It was a pretty decent episode across the board, and one that actually felt short, which can be a mark of a show that’s moving along in an entertaining way. My fears about how they would tread death turned out to be unfounded, so touché, 2 Broke Girls writers’ room.

We start things out at the Manhattan School of Pastry instead of the diner and are immediately witness to proof that by the third season both Kat Dennings and Beth Behrs have their repartee down. Everything feels really light and natural, and it contrasts fantastically with when Caroline reads the obituary and begins mourning for the woman who was like a mother to her. Max standing next to her and letting the jokes fall off really worked, and provided the opportunity for Bebe to step in for some comic relief.

I know I raved about Luis when he first appeared on the show, but man, Mary Lynn Rajskub is really great. She’s been playing her neurotic character in a really straightforward way, and the lines they’ve been feeding her have been top notch. Luis may not be around much due to him being a day waiter, but the newer secondary characters look like they have a lot of staying power.

As per the main portion of the episode, Max tags along with Caroline to the wedding on the premise of emotional support. That, and there’s a great Philly cheesesteak place right by the funeral home. As Bebe drives first at 20 mph and then at over 100 Ms. Channing gets to wax reminiscently about her time with Antonia; the old woman clearly meant a lot to her growing up, and she’s very much looking forward to being recognized as a large part of her life.

But this is a sitcom, so of course no one there knows who she is, or how Antonia made her a baby chick costume [“peep, peep”], and it is all very embarrassing. At one point she even yells at the funeral attendees about how she’s Caroline Channing, “[her] family was rich but then [her] father robbed everyone and [they] became the scourge of society overshadowed a little bit by Mel Gibson hating the Jews that same week.” Cue the sound of no one caring.

Max’s street smarts aren’t even for her to work her assumed identity of “Ricky’s girl” into a way of getting the family to pretend to remember her friend. It’s okay, though, because they bump into this older woman who does know who Caroline is, and turns out to have been Antonia’s lover. “THE MILITARY!” both Max and Caroline cry, implying that being a woman in the armed forces is  a sure sign of homosexuality. It’s not like the lady doesn’t back them up, either, saying: “I mean come on, that’s me with my arm around her on a tank!” Of course [and I’m not sure if I’ve mentioned this before though I probably have] this feels like evidence of co-creator Michael Patrick King touting the right to make fun of gay people because he is as well. To give credit where it’s due he did write last week’s episode, which I loved, so there’s that.

The old woman gives Caroline pictures of her nanny and her as a child together and it is adorable and heartwarming, etc.

Finally, and I could have mentioned this at the beginning, the following happened within the first few minutes:

And the shippers on tumblr, who I’ve mentioned before, went bananas. I mean, I was pretty thrilled with that whole scene because it culminated with this-

-which was delivered flawlessly, but people got really excited for other reasons. I mean, here’s a screenshot of the new tumblr posts under the “2 broke girls” tag the night the episode aired [click to open up larger in a new tab]:

I wanted to highlight the relevant areas, but would have ended up highlighting basically all of it.

I think it’s pretty fair to say that the writers definitely know what they’re doing, and will probably do what they can to fan the flames while still keeping their characters’ orientations fairly static. That’s not to say that there’s absolutely no place for homosexuality on the network, merely that this show was never marketed as a “lesbian comedy” and likely won’t become one. Let’s not forget that Max had to open her beer can off-camera; censorship is still alive and well when it comes to television, and execs and other such higher-ups may not approve of such a change for fear of rocking the boat. Sorry, Max/Caroline shippers. Would the name for that ship be Maxoline? Tumblr confirms that yes, yes it would be.

New Total: $77 [A man gives the two girls a cheque at the end of the episode assuming they’re family of the deceased, and it’s strongly hinted that they take the money. It is still strange why their total decreases so much, and I’m going to chalk it up to them paying Bebe back for gas].

The Title Refers To: The promise of life after death, I guess? There was strangely enough no naming of the episode title this week. Seriously, though, this would’ve been a great way to insert something cheesy about how Caroline can keep on living her life after her nanny’s passing.

Stray Observations [lots of them this week]: