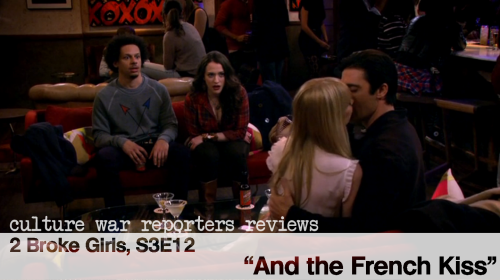 First of all, I’d like to personally thank CBS for not uploading any teaser pictures, which made creating the image above equal parts difficult and frustrating. This is the first time it’s ever happened, and for their mid-season finale, too. Which, pleas hold the applause for my effortless segue, are a fairly recent invention.

I more or less blame AMC’s The Walking Dead for hyping the last episode of the year as the “midseason finale”, a solid block of programming which would leave its audience  [I’m so sorry, I’m not sure where that came from] hyped for the show’s return. It makes perfect sense from a business standpoint, because every network wants viewers to remember to tune back in to the show after the three weeks of holiday specials. Mid-season finales have become big, which is probably why this week’s episode felt, well, small.

I suppose that could also be said about what happened in “And the French Kiss”, in which Caroline snogs with Chef Nicolas and then finds out he’s married and breaks it off [in this case “it” refers to their romantic relationship]. There’s definitely the possibility that drama will continue seeing as they work in the same general area and a healthy amount of sexual tension remains, but I think we’re pretty confident it won’t turn into anything particularly exciting.

To zoom in a little and stop critiquing the show on a macro level, things were . . . interesting. Which  is to say not particularly good or bad, just . . . interesting. I guess that here “interesting” means that we get good and bad and they more or less cancel each other out.

Eric Andre’s Deke shows up in the diner, which is good, because it’s a daring move from what has been a pretty formulaic show. It’s also sort of bad, which Han sums up by saying, “Oh no, now there’s two of them.” Andre has some pretty decent lines like, “Dame Judes texts me all the time; she’s thirstayyyyyy,” but also feels like a smarmy quip machine. In a way, Andre appears to be playing himself-

– it’s just that it doesn’t always work so well when there’s already a Max Black [who, let’s be real, appears to be Kat Dennings playing herself]. I want to make a good–bad-good sandwich here, so let me also just point out Dennings fake-laughing/being amused never really works, and Oleg, Han, and Earl are all being criminally underutilized in spite of Sophie being shoehorned into every storyline just because.

But hey, there are good things, of course, even for an episode that I’d mark as a solid stop down from the ones that came before it. It basically all comes from the new additions, namely Bebe. Sorry, MVP-regular Caroline, but Mary Lynn Rajskub has really been bringing it lately [“Y’know salad, tastes just like lettuce.”]. Back that up with Chef Nicolas’ totally nonchalant responses to Caroline accusing him of being married [“I know her name.”] and you’ve got some legitimately laugh-out-loud moments.

To end things off, and with respect to my mid-season finale expectations, Deke does appear to be making the moves on Ms. Black, what with them constantly talking and him licking her face. That may also pay off further down the line, so I guess we’ll see what happens in “And the Big But” which debuts on January 13th, 2014.

New Total: $220 [the girls’ made money, even after Caroline buying two salads in New York for her girl-talk lunch].

The Title Refers To: French kissing, which involves tongue, which is what Caroline was doing with the French Chef Nicolas. There may have been a little more than just tongue involved.